A last-minute spot in the main draw had become available to players who had lost in qualifying, and Trungelliti, ranked 190th at the time, claimed it after driving back to Paris from Barcelona with his mother and his 88-year-old grandmother in the back seat. When he upset Bernard Tomic in the first round, reporters clamored to hear the tale of his 650-mile journey.

Two weeks ago, Trungelliti was back in Paris. This time he was alone, physically and emotionally broken after a year of isolation and ostracization. He said he knew the reception at the this year’s tournament would not be as warm as last year’s when he read a tweet that said, “The snitch is coming to Paris.”

In the days before Trungelliti’s race to Paris last year, a fellow Argentine player had been sent away: Nicolás Kicker, ranked 84th, had been convicted of match fixing, the highest-ranked player to be found guilty of such an offense. He would eventually be banned for three years. In the following weeks, two more Argentine players, Federico Coria and Patricio Heras, also were issued bans in cases related to match fixing.

All three were punished, in part, because of testimony from Trungelliti.

His role as a whistle-blower was known to the accused because the Tennis Integrity Unit, the sport’s watchdog, did not obscure his identity in the hearings of the other players. As the players’ fates became clear, Trungelliti said, many in the Argentine tennis community turned cold toward him.

“The rest of the players were not shaking my hand anymore, not looking me in the face,” he said in an interview in Paris. “A couple of coaches as well.”

Trungelliti became involved in the cases in 2015, when — as anti-corruption rules require him to do — he reported to the T.I.U. an offer by a would-be fixer who had contacted him on Facebook.

“He obviously asked me to keep quiet, but I can’t because I hate this,” Trungelliti wrote in his initial communication to the T.I.U.

His three compatriots also had been contacted by one of the people who approached Trungelliti (Coria was not accused of fixing a match but of failing to report an approach).

“He was sending me messages from his personal phone,” Trungelliti said. “It was the same phone that he was having contact with Kicker, Coria and Heras. It was pretty stupid.”

A three-year study by an independent task force, completed last year, found a “tsunami” of fixed matches at the lower levels of professional tennis, where Trungelliti has played the majority of his career. 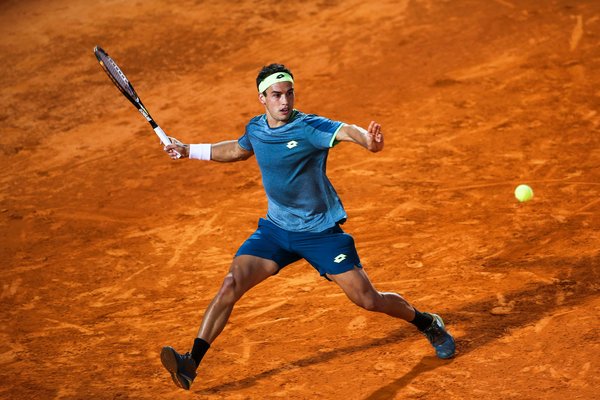 Until he became an outcast, though, Trungelliti thought more players followed anti-corruption protocols as he had. (Six players, including Coria, were convicted of failing to report a corrupt approach in 2018.)

“Now I realize it wasn’t like that,” he said. “Sometimes I can understand, but I don’t accept it. Because as long as you keep quiet, you are allowing that system to keep living. You keep feeding it.”

Some assumed Trungelliti had cooperated with the investigation because the T.I.U. had evidence against him, or because he had been paid for the information. He denied both accusations, and repeatedly asked the T.I.U. to publicly clear him, but for months it declined to do so.

Feeling increasingly uncomfortable around many from his home country, Trungelliti, who lives in Andorra, skipped the string of Challenger events in Latin America he normally would have played at the end of last season.

He first described his involvement in the case and his subsequent treatment in February in an interview with the Argentine newspaper La Nación.

Even after that, he said, he felt little support in tennis. Sergiy Stakhovsky, the ATP player council representative serving players of Trungelliti’s ranking tier, responded to an article about Trungelliti with the comment, “Thin line between whistle-blower and snitch, all depends who is the judge.”

To Trungelliti’s further dismay, no players, particularly the top ones who he knows could be influential, have publicly condemned Stakhovsky’s assessment. At the French Open, Stakhovsky declined an interview request and later did not answer a question about Trungelliti.

On May 1, four days after Stakhovsky’s comment, a T.I.U. news release said that it “condemns the treatment received by Mr. Trungelliti and would like to place on record its appreciation of his support and full compliance with the Tennis Anti-Corruption Program,” and clarified that he had not been paid for his information or been investigated himself.

The Challenger tour is fertile soil for match fixing, Trungelliti and others acknowledge, because prize money is meager and expenses can soar. To struggling players in financial distress, offers of tens of thousands of dollars to fix a single match can be tantalizing.

Trungelliti, currently ranked 139th, said that if he stopped playing now, he would have no money to show for his career. His career prize money of $847,612 is prominently listed on his profile on the ATP website; the various expenses he has had to deduct out of that sum — for coaching, travel, equipment — are less known, to his frustration.

“I remember when I was 300th or something like that, I went to a clinic in my hometown, and one little guy, 8 years old, came to me and said, ‘Can you give me your racket?’ ” Trungelliti said. “I said no. He said: ‘Why? You have a lot of money. You should give it to me!’

“People think I have a lot of money, when it’s completely different.”

Money, however, is not the only explanation Trungelliti gives for why the Challenger level has become susceptible to corruption. He noted that the women’s tour, which has even less prize money, also has less match fixing.

“Maybe the girls are better than us,” he said, laughing. “It’s the only way to think. If they need more money than us, and they don’t fix matches, here the problem is the ethics in men’s tennis more than any other thing.”

When he lost in the first round of qualifying at Roland Garros, Trungelliti said, the pain in his back was compounded by the stress he has felt.

“Now I understand more why people don’t make any reports,” he said.

Mark Harrison, a spokesman for the T.I.U., said Thursday that the unit received “excellent cooperation” from players, officials and others in reporting knowledge or suspicion of corrupt activity. He called Trungelliti’s situation “exceptional.”

“The great majority of people who support our work are not affected in the way he has been,” Harrison said.

Trungelliti’s fellow Argentine player Leonardo Mayer said he hoped more people would support his colleague because “it’s not easy to be in his shoes.”

Trungelliti said that sometimes he did not know why he continued playing a sport that has brought him little but anguish, but he said that he hoped his experience would improve the path for others.

“Somebody put on Twitter that for me it was a career suicide decision to make a report,” he said. “But for me I have no problem, because for me it was clear: I could kill my career 700 times rather than be part of that system. For many players, it seems absolutely the opposite.