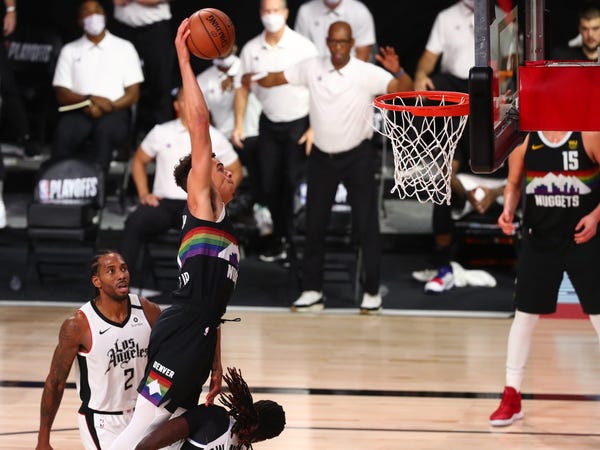 Michael Porter Jr. threw down the nastiest dunk of the 2020 NBA Playoffs so far, and his dad was on hand to witness the stunning play.

During the third quarter in Game 3 of the Denver Nuggets' second-round matchup against the Los Angeles Clippers Monday night, the Nuggets' second-year forward drove into the lane and rose up to posterize NBA sixth man of the year Montrezl Harrell.

It appeared as though Harrell thought he should've been issued a charge, but the 6-foot-10 budding star got off the flush cleanly.

Porter's father — who joined his son in the NBA's bubble at Walt Disney World in Orlando, Florida — was caught on the broadcast reacting to the vicious slam. He coolly raised his eyebrows and nodded in approval as the camera panned in on his face. Then he turned to his left as if to say "I told you so."

Though Denver held a narrow lead heading into the fourth quarter of Monday night's contest, Porter and the Nuggets weren't able to fend off the comeback from Kawhi Leonard, Paul George, and company.

Though Porter contributed a healthy 18 points and 10 rebounds on the night, Denver ultimately lost 113-107 to fall a game behind in the series, and Porter acknowledged that his highlight-reel dunk would've been much sweeter had his team secured the victory.

"Around the rim I'm just trying to be more aggressive, take the contact, and finish, so I just jumped and I was high enough to dunk it," Porter said. "It would have felt a lot better if we won."

Porter and the Nuggets will return to the floor for Game 4 Wednesday night at 9 p.m.

The Clippers currently lead the series 2-1.

09/08/2020 Sport Comments Off on Michael Porter Jr. threw down the dunk of the playoffs over the NBA’s 6th man of the year, and his dad was on scene to react to the epic poster
Recent Posts
We and our partners use cookies on this site to improve our service, perform analytics, personalize advertising, measure advertising performance, and remember website preferences.Ok