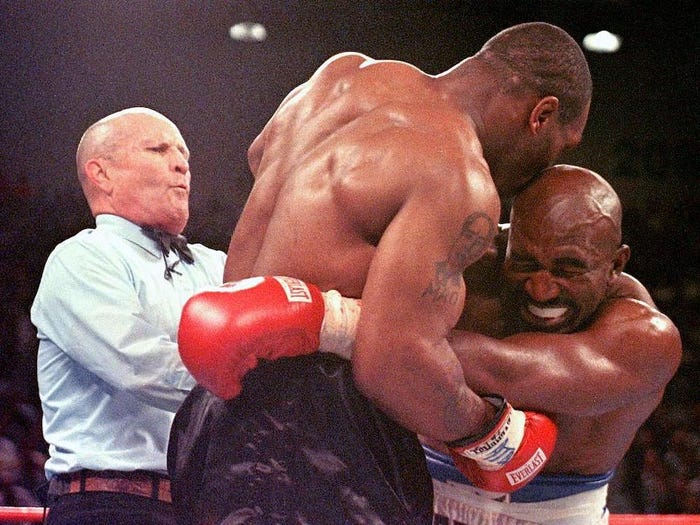 Mike Tyson said he bit Evander Holyfield's ear because he "wanted to kill him" at that moment.

Tyson, who became the youngest fighter to win the heavyweight championship when he was 20 in 1986, clamped his teeth down on Holyfield's ear during their second bout in 1997, a bout retrospectively dubbed "The Bite Fight."

Holyfield dominated the opening rounds and looked like he could coast toward a decision, however, in the middle of a clinch in the third, he could be heard screaming in pain.

Tyson had bitten a chunk of his ear and spat the cartilage on the floor, and was given a two-point penalty deduction.

Though the fight was allowed to continue, Tyson bit Holyfield on the other ear and was disqualified.

The moment went down in infamy, becoming one of the most famous images in sports in the 1990s.

When asked by Jim Gray on Fox News whether he would ever commit such a flagrant foul again, Tyson said Sunday: "I hope not."

Tyson added: "I say, 'No, never ever again.' But I might do it again. Well if he does what he was doing to get bitten, I would bite him again. Yeah."

The fighter said he was getting annoyed because he felt Holyfield was headbutting him during the contest.

He said: "I bit him because I wanted to kill him. I was really mad about my head being bumped and everything. I really lost consciousness of the whole fight. It took me out of my fight plan and everything."

Holyfield said earlier this year that he really wanted to bite Tyson back after he'd had half of his ear bitten off.

Holyfield's cornermen were apparently telling him to think about God to calm him down, and the fighter then remembered sage advice from his grandmother.

"All of a sudden it came across my mind what my grandmama said — they always catch the person who do it the second time," the former two-weight world champion told Boxing Scene.

Holyfield and Tyson could meet once again in a boxing ring, albeit in an exhibition, as the latter looks for former big-name athletes to take part in his for-charity League of Legends promotional company.

Tyson returns to the ring for an eight-round boxing exhibition November 28, where he'll box Roy Jones Jr. in a wildly-anticipated showcase at the Staples Center in Los Angeles.

Holyfield would make for a suitable opponent should Tyson look for another exhibition partner following the Jones event.

11/17/2020 Sport Comments Off on Mike Tyson said he bit Evander Holyfield’s ear because he ‘wanted to kill him’ in that moment
Recent Posts
We and our partners use cookies on this site to improve our service, perform analytics, personalize advertising, measure advertising performance, and remember website preferences.Ok