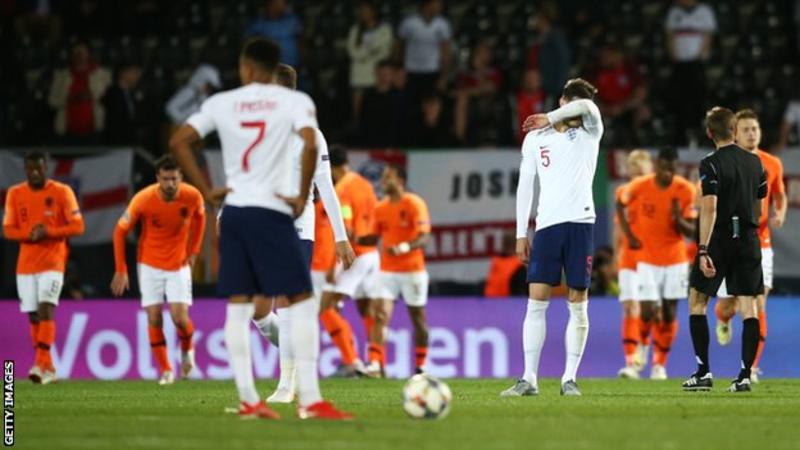 England’s disappointment will not be on the crushing scale that followed the World Cup semi-final loss to Croatia in Moscow last summer but it will still be painful after arriving in Portugal with high hopes of claiming their first trophy since the 1966 World Cup.

Instead, the last four proved an insurmountable barrier once more, meaning England must somehow raise themselves for a cosmetic third-place play-off with Switzerland in Guimaraes on Sunday – a tough task at the end of such a gruelling season.

But what can manager Gareth Southgate digest from the defeat to Ronald Koeman’s developing Netherlands team?

England’s defence has looked vulnerable against high-class opponents in the past and here they made a massive contribution to their own downfall.

The Netherlands have travelled a long way since losing to Southgate’s side in Koeman’s first game in charge in March 2018 and were deserved winners, but England’s worst wounds were self-inflicted.

John Stones was the main culprit but Harry Maguire and Kyle Walker were also desperately poor and their places must be questioned if this sloppiness continues.

Stones is renowned as a ball-playing centre-half, the sort his club manager Pep Guardiola loves. Yet the Manchester City boss preferred Vincent Kompany alongside Aymeric Laporte to close out the Premier League title win.

It was easy to see why City’s boss turned to the Belgian’s reliability because Stones was an accident waiting to happen all night, eventually paying the price when he was robbed attempting a ‘Cruyff turn’ in his penalty area – an error that led to Kyle Walker’s own goal.

The modern vogue is to play the ball out from the back but it has meant, certainly in the case of Stones, Maguire and Walker, the very notion of being risk averse often disappears.

England invited trouble in like an old friend and it duly arrived. To say they made schoolboy errors is to do a disservice to schoolboys. There was talk of fatigue but England’s crucial errors were down to a failure to adhere to simple defensive rules.

It may be an old-fashioned theory in the modern game, and Southgate’s purist style is surely the right one, but perhaps it is time he delivered a sharp reminder there is no shame in clearing your lines.

England’s defending was, too many times, either too clever or very stupid – not a great combination.

Stones, his confidence falling through the floor, then delivered a hospital pass to a tiring Ross Barkley with inevitable results as Quincy Promes scored the Netherlands’ third.

Walker and Maguire were little better. The former could easily have conceded a goal himself when gifting possession to Memphis Depay while the latter’s performance was riddled with errors.

Southgate has alternatives to turn to, not least Liverpool’s Champions League-winning right-back Trent-Alexander Arnold and his Anfield team-mate Joe Gomez, who should feature in central defence once he regains full fitness.

What is clear is that England’s defending throughout was unacceptable, and the reason they will be back in Guimaraes on Sunday for a fixture that is hardly to get their pulses racing.

Should Southgate have gone for broke?

England’s performance, at least in midfield, improved when Jordan Henderson came on – but should he have played from the start? 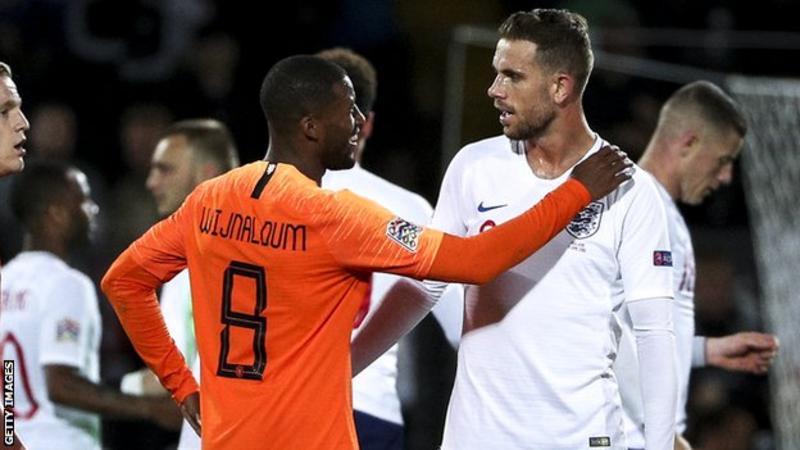 Henderson will have been on a high after lifting the Champions League trophy but Southgate decided against using players who played in Madrid, notably Liverpool’s captain and Harry Kane as well as Alexander-Arnold.

Kane’s exclusion was perfectly understandable. He did not look fit in Madrid after a long absence.

However Henderson added some much-needed composure to the midfield when he came on after 77 minutes and if England view this as a serious trophy – which they would have done had they won – surely Liverpool’s captain should have started.

Netherlands coach Koeman had no such qualms about playing Liverpool pair Virgil van Dijk, imperious once more, and Georginio Wijnaldum.

England still have cause for optimism

This was a bad night with bad errors and a bad result – but the progress of the last 12 months should not be dismissed.

And, lest we forget, England could still have won – no matter how undeserved that may have been.

Jesse Lingard thought he had snatched a late winner only for VAR’s intervention to deem him offside, while Jadon Sancho missed a headed chance at 1-0 that may have put the game beyond the Netherlands.

England’s arrival here was the result of a thrilling win in Spain last October, their first away victory there for 31 years, and a late comeback to beat World Cup semi-final conquerors Croatia at Wembley.

They have opened their Euro 2020 qualifying campaign with two five-goal wins against the Czech Republic and Montenegro.

Southgate has an exciting, youthful squad that has rich promise and this is a manager and team the nation can get behind.

All that does not mean, however, that England’s failings can be ignored, because it would not fit the blizzard of positive messages they have been surrounded by in the last 12 months.

The questions about whether they can get over the line when it matters will only go away when they actually win a semi-final, then preferably a final.

England have established themselves as one of the best teams in Europe but their defensive lapses and lack of midfield control will mean they struggle to claim the big wins Southgate demands.

It is the reason they will be on the Uefa Nations League undercard against Switzerland in Guimaraes on Sunday while the Netherlands and Portugal will play for the trophy an hour away in Porto’s Estadio do Dragao.

The heavens opened above the Estadio D Afonso Henriques in Guimaraes as England came to terms with their semi-final defeat to the Netherlands – and it was not the only cold shower for Southgate and his players.