You and me, babe. You’ll recall we got into the whole greyhound thing back in 2015 after the mighty Four Corners exposé of the horrors of live-baiting, and we not only supported the Baird government banning it, but were loudly appalled a couple of years ago when they caved in after all. But then our attention shifted, didn’t it? We went on to other things, and while we were out some of the industry went back to their old ways. 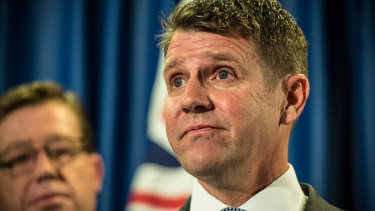 Backflip: Mike Baird’s NSW government banned greyhound racing in 2016 only to go back on that decision months later.Credit:Wolter Peeters

As I ranted a little at the time, the Herald noted in the middle of last year: “The rate and number of greyhounds that are killed and injured while racing rose for the third consecutive quarter and is now higher than at any time since records began in 2016. There were 37 dogs killed or euthanised at the 34 tracks across NSW in the three months to March 2018 with about 15 per cent of all the greyhounds who raced suffering at least one injury.”

And then, later in the year:

“The RSPCA has uncovered a mass greyhound grave in western Sydney, on the property of a licensed and registered greyhound trainer . . . During the raid, senior RSPCA NSW inspectors also seized nine sick and emaciated dogs that had ‘such pressing and urgent veterinary needs that they required immediate treatment,” RSPCA NSW acting chief inspector Andrew Clachers said.

The NSW government, though, barely blinked.

As I raged, the government even went on to provide half-a-million of taxpayer funds to artificially inflate the prizemoney and create the world’s richest greyhound race, the Million Dollar Chase.

But here’s the thing, while you and I mostly moved on to other things, a wonderful group of people have continued to do their bit and more to look after those greyhounds too slow to warrant the attention of the industry itself.

It is the NSW Government that is morally responsible for these hounds. They were the ones that first said it was too appalling to go on.

I cite, specifically, Greyhound Rescue: an organisation run by 140 volunteers devoted to finding homes for greyhounds discarded by the industry. The only greyhound charity with kennels, they are based near Camden where they house the hounds until such time as they can find a home. The problem now comes because they are likely to have to leave by the end of the year due to the land being rezoned.

“Greyhound Rescue,” I’m told by one of the board members of the organisation, Jeremy Richman, “has nowhere else to go. The hounds in the kennels at the time will lose their home, and the ones waiting . . . well you clearly know the potential fate of greyhounds the industry can’t make money from.”

We most certainly do. See above. 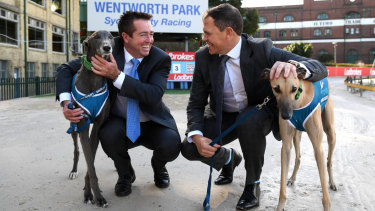 Too easy, Campese. It is the NSW Government that is morally responsible for the plight of these hounds. They were the ones that first said it was too morally appalling to go on, and then not only backflipped but then put serious coin towards promoting it, fer Chrissakes.

I’m looking at you, Racing Minister Paul Toole. When you announced your whole wretched new race, funded by a big chunk of change from the taxpayer, you boasted of “a fresh start for the NSW greyhound racing industry. The Million Dollar Chase will highlight the industry’s renewed focus on animal welfare and high standards of integrity.”

Great. Having talked the talk, can you walk the walk, please, and help this mob get a permanent base for their kennels? Or get Planning Minister Rob Stokes to have another look at the zoning of the kennels? You’ve put half a million dollars of our money to artificially pump up an industry that has a disgraceful rate of dogs put down because of it. You are morally beholden – did I mention – to put at least that amount and more to help those trying to clean up your mess.

You’ve put half a million dollars of our money to artificially pump up an industry that has a disgraceful rate of dogs put down.

Beyond everything else, it makes good economic sense. Greyhound Rescue operates on a budget of $250,000, and last year, with their no-kill policy, homed 200 dogs, at a cost of $1250 per greyhound. And they take hounds rejected by Greyhounds As Pets, the industry body which places retired dogs, funded by Greyhound Racing NSW, meaning they benefit from taxpayer money.

You get the drift, Minister Toole.

The more you support Greyhound Rescue, the more you can live up to the claim of the “industry’s renewed focus on animal welfare and high standards of integrity,” for more dogs will be saved, and at a rate cheaper to the taxpayer.

I repeat, if you are going to let this wretched industry go on, you must save the hounds!

And while I have your attention, in March 2017, your government also accepted the Greyhound Industry Reform Panel recommendation to remove the requirement that retired greyhounds be muzzled when in the public domain. The Animal Justice Party’s Emma Hurst MLC, as you know, asked a cogent question in the NSW Parliament on Tuesday: “From 1 January this year in Victoria, greyhounds retired from the racing industry no longer have to wear a muzzle. Why are greyhounds required to wear a muzzle in NSWs?” 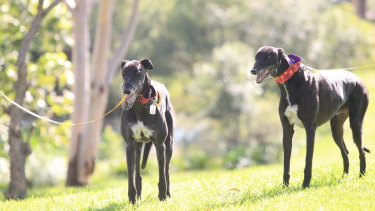 Wrong impression: the requirement that greyhounds be muzzled in NSW can make potential owners wary.Credit:Simon Bennett

It is an important question, because as Hurst noted to me “By keeping these greyhounds muzzled in dog parks and on our streets, the Government is crippling the effort to get these ex-racers re-homed. The muzzle sends the wrong message.”

The reply came from Don Harwin MLC representing the Minister for Local Government, Shelley Hancock, to the effect that “The New South Wales Government is committed to removing the muzzling requirement for non-racing greyhounds. That commitment will be implemented in a way that balances the welfare of greyhounds and other animals, as well as community safety.”
Minister, what “community safety?” And why the delay? The greyhounds aren’t a danger to humans, we are a danger to them! If greyhounds in Victoria are safe without muzzles, surely they must be safe here, too?

We’re watching. The fate of the greyhounds is not forgotten, and bravo all those people who’ve relentlessly kept the fire burning since the Four Corners report.

06/19/2019 Sport Comments Off on No grey area: Toole must find cash for dogs charity
Recent Posts