TORONTO — “Too casual, too casual, dribble the ball! Draymond Green is unhappy with himself, and he should be.”

Hubie Brown, the analyst for ESPN Radio, leaned forward at his courtside table and talked into his microphone about the Golden State Warriors, who are playing a championship series with the Toronto Raptors. Brown’s standards are High Hoop, his knowledge voluminous, his eye discerning to the point of a hawk seeking prey.

A Raptor player failed to stop a pass, and Brown winced, turned to his announcer and said:

“See, you want to stop him from catching that pass, I know that’s difficult, but c’mon, this is the finals.”

Brown, 85, is the acerbic Old Man River of N.B.A. broadcasting, having analyzed 17 championship rounds for ESPN and assorted other outlets, more than any broadcaster living or dead. He rattles off data — misses, shooting percentages, the number of back cuts — submachine-gun style, rat-a-tat, followed by a chaser of context and critique. He is passionately dispassionate and cuts no player or coach a break.

Last year he signed another two-year contract with ESPN. Entering Game 4 of the finals on Friday, he had done 22 television games this season and 12 on radio. He is three months away from his 86th birthday.

Have you, I asked, ever thought of retirement?

Brown squinted. His white hair was scalloped against his scalp, but his face looked remarkably unlined.

“You can only paint the fence so many times, right?” he said. “You get to 80 years old, I guarantee good friends are dying every month. And you’re a city guy, and guys you played against, they are all passing away, too.”

“See, I enjoy this and it keeps me sharp,” he told me. “You understand?”

His pregame preparation reflected hoops devotion edging toward the religious. He met with opposing coaches, peer to peer. Then he looked at a small pad on which he had created rows of what looked like minutely etched hieroglyphics. This was his personal chart of shots taken and missed, second-chance rebounds, back cuts, secondary picks, and so on and on.

His words form a lifeline for the radio listener. In his view, if he bollixes a sentence, misstates a statistic, gets a defensive set wrong, he has failed the listener, failed the network, failed himself.

“This is going all over the world, 33 million people listening in China and, what, you want to make an ass out of yourself and not be prepared and not enhance the broadcast?” he said. “Stop it already.”

Once upon a time Brown was a coaching lifer, beginning with the Milwaukee Bucks of Kareem Abdul-Jabbar and Oscar Robertson. He emerged from Elizabeth, N.J., with a city kid’s appreciation for a curse as noun, verb and adjective. His look was early disco with wide lapels and a curly perm.

He led four pro teams — the Kentucky Colonels of the American Basketball Association, and the N.B.A.’s Atlanta Hawks, the Knicks and the Memphis Grizzlies. He did his final turn with the Grizzlies in his early 70s and won the Coach of the Year Award. He was a maestro of Xs and Os, and God help the player who freelanced and broke one of his plays.

As a Sports Illustrated profile by Bruce Newman said, “Hubie Brown burned his bridges before him.”

He has mellowed in his ninth decade, but let’s not panic. The Raptors let the Warriors run backdoor cuts for layups and, what, you think the analyst for ESPN should not critique that? 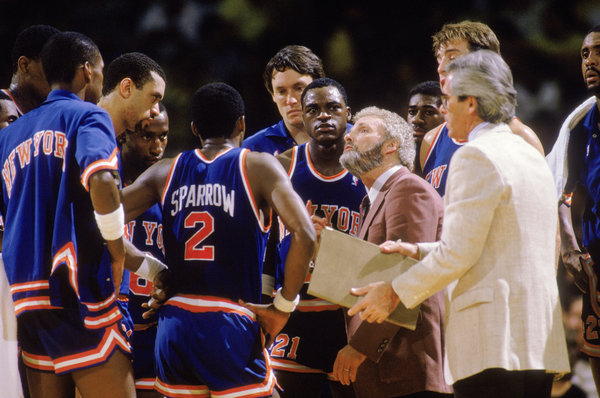 He does not, however, yell at the new generation to get off his lawn. A tattoo, a nose ring, hip-hop blasting so loud he has to yell to make himself heard — he can live with that. He was a working-class kid, and his favorite players remain those who scraped and elbowed to get where they are.

One of his favorites is the Bucks’ Giannis Antetokounmpo — Brown calls him “the Greek” — who has crafted himself into a star.

“The Greek comes into the league at 6-9 and 200 pounds, and now he’s 6-11 and 240 pounds, and his game takes a leap every year,” Brown said. “The Greek understands life, and you know why? Because he was selling stuff on the streets of Athens as a kid.”

We stood in an arena hallway, and the man mountain known as Shaquille O’Neal put a hand on Brown’s shoulder. Brown grabbed Shaq’s mitt, his own hand disappearing into a rabbit hole. Later Raptors center Marc Gasol chatted with Brown, who coached his older brother, Pau, in Memphis.

Brown has pet peeves, which he refers to as crimes, by which he means transgressions against hooping. During the last series, his eyes grew wide as he watched a few Bucks bench players standing outside a huddle staring into space.

When Brown coached, he positioned assistants outside the circle, and if they saw a player with wandering attention, Brown would issue a fine. “I did a Clipper game, I couldn’t believe it, two guys were waving to women,” he said. “I’m a fan paying a lot of money, and that? What the hell?”

I met Brown for breakfast recently. He walked in wearing a black Nike athletic shirt and pants and white sneakers. The interview, a disquisition really, lasted three entertaining hours, his mind a smooth-playing L.P., never skipping a groove.

I wondered aloud why the Raptors were getting beat on backdoor cuts. Brown turned his omelet sideways. This is the court, he said. He put the salt and pepper shakers at either end — those were the baskets. He used the cutlery to delineate the sidelines and the fork to diagram the backdoor cuts.

“I believe in visual learning,” he said.

He started his broadcast career in the early 1980s, and he would not allow himself to coast. He made sure to see every team in the league play several times and, if possible, broadcast their games, a practice he adheres to still. One season he broadcast 115 games, pro and college.

“I would wake up and I had no clue what city I was in,” he said.

He called a friend, a Princeton graduate, and asked: Would you scout me?

“I would call him at halftime from a pay phone,” Brown said, “and he would ask me: Did you realize you started 15 sentences with ‘See?’”

As Brown grew up in Elizabeth, his father became a foreman at the Navy shipyards in nearby Kearny during World War II, working double and triple time. When the war ended he was laid off. He walked the streets month after month looking for work.

“One day he says to me: ‘Sit down,’” Brown recalled. “And he tells me, ‘Hubie, no matter how good you have it, you’re always a half-step from the street.’”

Brown’s voice grew thick, and he paused awhile before adding, “My father was the greatest man I’ve ever known.”

He got an assistant coaching job with the Bucks. One morning he and Coach Larry Costello arrived at St. Something or Other, the high school gym where they practiced. The players were not due for an hour, but the coaches heard dribbling upstairs.

Brown found Abdul-Jabbar, wheeling and shooting and sweating in an empty gym. Brown fell in love. Here was a star with a work ethic that would make his father proud.

“I once told my team that I had the privilege to coach Kareem and Oscar,” Brown said, “and there’s no one in this room who could kiss” the rear end of either of those guys. (Note to reader: That sentence is not a verbatim transcription.)

Brown later coached the Colonels, a team loaded with future N.B.A. stars. One night they played the Spirits of St. Louis, a pirate brigantine of a franchise with more malcontents per capita than many county lockups. None was wilder than Brooklyn’s own Fly Williams.

Brown walked into the gym and saw the St. Louis team running layups. In the middle of the floor one of the Spirits had Fly pinned and was punching him in the face.

“Let me tell you,” Brown said, “not a single one of his teammates was even watching, much less trying to stop it.”

Not long after, Brown was made coach of the Hawks, a lousy team with no prospects. In his second season, the team made the playoffs. Ted Turner, the owner, called Brown in.

Hubie, I have an idea! After the basketball season, why don’t you take over as manager of the baseball Braves, which I also own?

It never happened, but that didn’t stop Brown’s assistant coaches with the Hawks from quarreling about who would coach third base.

For many years, Brown has run clinics in addition to doing television work. His favorite audience consisted of junior high school and high school coaches, gym rats. He harbored a special affection for an Irish nun in Coke-bottle glasses who spoke of coaching her “lads and lassies.”

“I do the workshops,” Brown said, “because without basketball I would be just another guy in the factory.”

He excused himself. He had to meet with the Raptors in hopes of better understanding their schemes. He shook his head.

“I’m still nervous when I do television or radio,” he said. “One half-step from the street. If I believed in tattoos, I’d have that tattooed on my arm.”

06/08/2019 Sport Comments Off on Oh the Stories Hubie Brown Can Tell, About the N.B.A. and More
Recent Posts