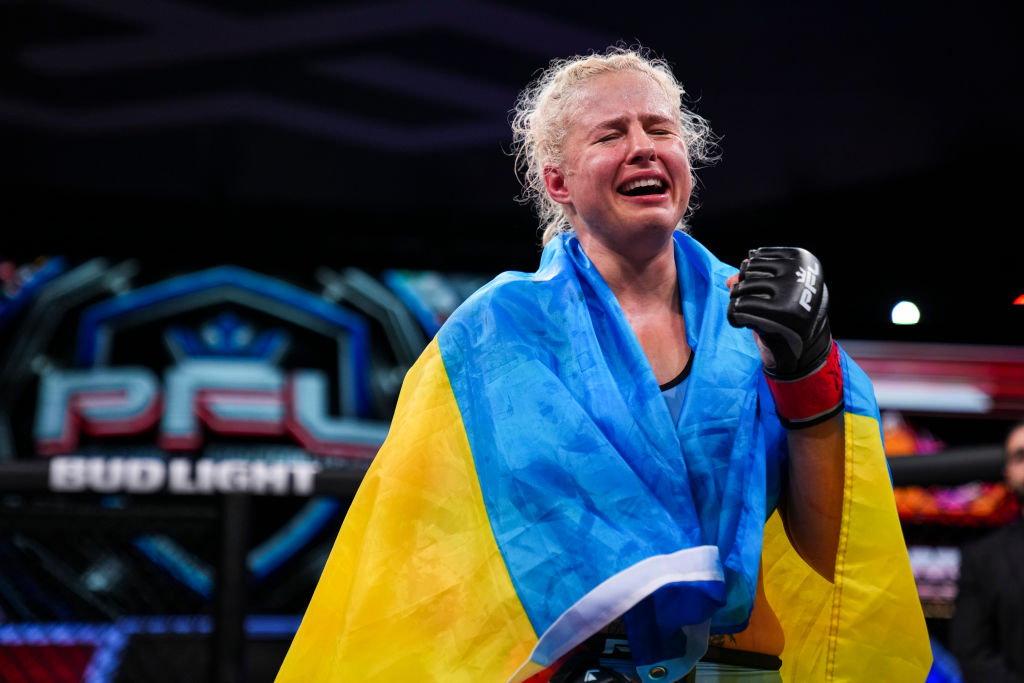 Olena Kolesnyk was given 15 minutes to flee her home in Kyiv as the Russian invasion of Ukraine began in February.

‘I looked out my window and I could see people running away with their children, their suitcases, everything,’ she recalled. ‘I saw the tanks rolling into the city.’

After escaping, she resisted the urge to pick up a gun and fight after a heart-wrenching conversation with her mother. Instead, the 32-year-old promised to serve her country by continuing on her path to MMA glory.

On the same night Oleksandr Usyk defends his world titles against Anthony Joshua, Kolesnyk will enter the cage draped in the Ukrainian flag in London on Saturday as she seeks to book her place in the Professional Fighters League final.

The prize at the end of her journey this year is world championship belt and a cheque for $1million. But ensuring the pride and bravery of the Ukrainian people is recognised is the only goal she is focused on.

On 24 February, Russia began its devastating assault on its neighbouring country. The day before, Kolesnyk went to bed expecting to wake up the next morning and begin training as per her usual routine. Instead, she woke up to a living nightmare.

‘I woke up to a call from one of my friends from my hometown of Odessa, telling me a war had started,’ Kolesnyk told Metro.co.uk. ‘I was in a deep sleep, it was like four or five in the morning, it was still dark outside. Then I heard the noises and saw people running.

‘My friend told me to leave all my stuff behind. “You have 15 minutes, just take your documents and run to the underground. I will get you in a car and take you to your home. Kyiv is in trouble.”’

As attacks began across the country, stars of Ukrainian sport returned to defend their homeland. Five months on from reaching the summit of heavyweight boxing, IBF, WBO and WBA champion Usyk returned to Ukraine where he joined the territorial defence unit.

Three-weight world champion Vasiliy Lomachenko did likewise, turning down the chance to reclaim his titles this summer to stay and fight. Bellator welterweight champion Yaroslov Amosov remains enlisted in defences forces with legendary heavyweights Wladimir and Vitali Klitschko a constant presence in the fight against Russia and Vladimir Putin.

Trained for battle, Kolesnyk’s first instinct was to pick up a rifle and join her countrymen and women on the front line. But following deep contemplation and conversations with those closest to her, she – like Usyk – was convinced she would be better utilised fighting for Ukraine in the ring rather than in the trenches.

‘I remember speaking to my mother. I told her I will join the army,’ Kolesnyk continued. ‘I know how to shoot, I know how to fight. I thought, “I will never forgive myself if I am here doing nothing and a rocket hits my house and my parents and my sister die.”

‘She explained they will be more proud and that I will help the Ukrainian people much more if I have a voice and speak about what is going on. That was maybe the hardest decision of my life. Because you never know when you will speak to your family for the last time’.

Such emotional strife makes questions about MMA seem almost unimportant but victories for Kolesnyk and Usyk on Saturday night would profoundly resonate across the world and back home in Ukraine.

Competing in the PFL’s regular season format, the lightweight has won both of her fights this year, decision victories over Abby Montes and Vanessa Melo, with Larissa Pacheco the woman standing in her way at the Copper Box Arena this weekend. Another will surely line up a final showdown against double Olympian Kayla Harrison, who headlines the card in the capital.

Having lost both her fights in 2021, there is a simple reason for Kolesnyk’s success this year. Fuelled by the tragedy back home, there is simply no alternative but to win.

Fighters entering the ring or the cage draped in their country’s flag is commonplace but it will be rarely as poignant as when Kolesnyk and Usyk do so on Saturday night.

‘When fighters say that they are fighting for the country, I think its a little bit of a lie,’ she said.

‘First of all, they fight for themselves. Second of all, we represent a place where we are born. And for me to be a patriot, these aren’t just words. Over all these years I have always represented Ukraine and I have always been proud to raise my flag.

‘I am and I am lucky to have been born in my country. When we sing our national anthem, for our freedom, we know we will kill for our body and for our soul. This is all you need to know about Ukrainians. We are ready to die.’