TORONTO — With Kevin Durant unavailable to come to the immediate rescue, the Golden State Warriors need more from their supporting cast.

The Splash Brothers did their part in Game 1 of the NBA Finals, with Steph Curry and Klay Thompson combining for 55 points. That matched the scoring output of Toronto’s Kawhi Leonard and Pascal Siakam in the Raptors’ 118-109 victory as a potentially crippling problem emerged for the Warriors.

They need more from their non-stars.

That was especially clear on a night when the Warriors limited Leonard to 23 points, eight below his postseason average.

“Yeah, we did a good job of limiting Kawhi,’’ said Thompson, Golden State’s All-Star shooting guard. “But it's not Kawhi Leonard, it's the Raptors.’’ 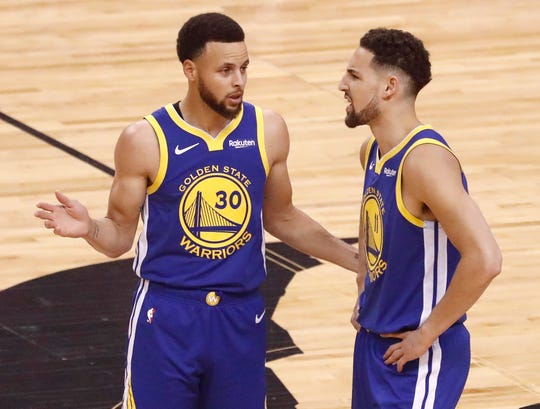 It’s Marc Gasol, the center who drained two uncontested 3-pointers and finished with 20 points, more than double his postseason average.

It’s Fred VanVleet, the backup guard who shot 5-for-8 from the floor and finished with 15 points, more than double his postseason average.

“Well,’’ Warriors coach Steve Kerr said after the game, “I think that the biggest thing coming in is we really didn't feel like we knew this team very well.’’

Consider that a painful introduction to the Raptors, who also overcame a triple-double from Golden State’s Draymond Green. Green also had six turnovers and failed to keep up with Siakam, who had a postseason-best 32 points.

“The biggest thing for me was our transition defense was just awful and that's the game,’’ Kerr said. “That's the No. 1 priority when you play Toronto, you have to take care of their transition and we gave up 24 fast-break points, we turned it over 17 times.’’