TORONTO — Kevin Durant has barely been seen by anyone outside the Golden State Warriors’ circle during these NBA Finals. He hasn’t been in the locker room when it’s open to the media, hasn’t been on the bench during games and hasn’t spoken a word on his typically active Twitter account since May 29.

Durant may be out of sight, but in many ways, he’s been omnipresent during these Finals against Toronto, with another round of smoke signals coming Sunday that the Warriors expect him to play in a Game 5 that could send them into an offseason of uncertainty.

At this point in the series, with the Warriors down 3-1, there’s nothing to lose for either the team or Durant’s brand if he comes back now — even if he’s significantly less than 100 percent. Nobody will blame him if he fails to make the difference. At the same time, Golden State’s chances of winning three straight titles without him are about as good as Don Cherry wearing a monochrome sport coat on “Hockey Night in Canada,” so why not? 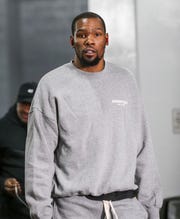 But when we look back on this series and analyze how we got here, it’s too simplistic to pin it all on their two-time Finals MVP being sidelined by a calf injury for more than a month. We shouldn’t let Golden State off that easy.

After Game 4, when multiple media outlets reported about frustration bubbling within the Warriors’ locker room at the slow nature of Durant’s recovery while Klay Thompson and Kevon Looney went to extreme lengths to play through injuries, one thing became very clear about their predicament: The expectation that Durant was going to rescue Golden State in this series has been just as destructive as his absence.

“I would like to think he would make a difference,” Warriors guard Shaun Livingston said. “Any time a player of that caliber comes back or goes out of the lineup, it's going to be felt certain ways. We'll see what happens (Monday). Hopefully he comes back, but at this point, we prepare like he's not playing because he hasn't been playing.”

That’s probably what the Warriors should have done all along, and hitting the mental reset button now may be about a week too late.

If the Warriors could go back and do it all over again, they never should have given a hopeful impression that Durant might come back and play in this series.

It wasn’t fair to Durant, who quite simply wasn’t cleared to play and hadn’t been healthy enough to practice until Sunday. And it couldn’t have been productive for the collective mentality of a team to go into a series like this, against an opponent as good as Toronto, expecting their best player to come back soon, only to see no real progress until their backs were against the wall.

“He will be very welcome, I'll say that much,” Thompson said. “I think it's pretty easy to realize we obviously miss him out there and he's propelled us to two championships in the last two years. So it would be pretty storybook if he could come back and help us do the same.”

Of course, there’s a subtext to this in the tightrope Golden State has had to walk all season with Durant’s free agency looming as the big existential issue over what becomes of their dynasty. If you treat him as if he’s not coming back in the Finals and unnecessary in the first place, it doesn’t help Golden State convince him to re-sign. And yet, spending every day of this series issuing hopeful progress reports while waiting for him to turn this series around hasn’t accomplished much other than disappointment and frustration. Especially when there hadn’t been any actual evidence that Durant was doing things on a basketball court that would be necessary for him to play in a game.

Now, pinning hopes on Durant is the only card the Warriors have left to play. To this point, they’ve been out-manned and made to look lethargic, as if the collective output of five consecutive Finals runs is making them look old and rather fed up with the whole thing.

Andre Iguodala alluded to that on Sunday, how there’s nothing quite like the energy and togetherness of a team being in the Finals for the first time and how it only gets more difficult to maintain as the dynasty goes on and the drama within a locker room grows.

“They never been here before, so there's that level of excitement that you can't replicate,” he said. “Once you're there more than once, it gets harder and harder.”

Maybe Durant, who was spotted entering and exiting the non-public portion of Golden State’s practice Sunday, gives them a second wind.

More realistically, asking someone who hasn’t played or done significant basketball activity since May 8 to play at NBA Finals speed while being guarded by the world’s best wing defender in Kawhi Leonard doesn’t seem likely to be the thing that turns around a series in which Toronto has been the better team for 14 of 16 quarters.

“It's just having another powerful weapon out there that can do some very dynamic things on the floor,” Warriors guard Stephen Curry said. “We'll be able to adjust in transition pretty smoothly. He's been in plenty of Finals and has played well. No matter what percentage he's at, I'm sure he'll be impactful and effective out there.”

But wishful thinking on Durant hasn’t done much for Golden State’s play so far, nor has it sped up the healing of a calf that stubbornly wasn’t complying with the timetable of an NBA Finals.

But at least Durant playing in Game 5 would finally bring clarity to this series. Either the underlying dynamics of this series will shift just in time, or it will be remembered as a failed last gasp.

06/09/2019 Sport Comments Off on Opinion: Warriors’ wishful thinking on Kevin Durant has been just as destructive as his absence
Recent Posts