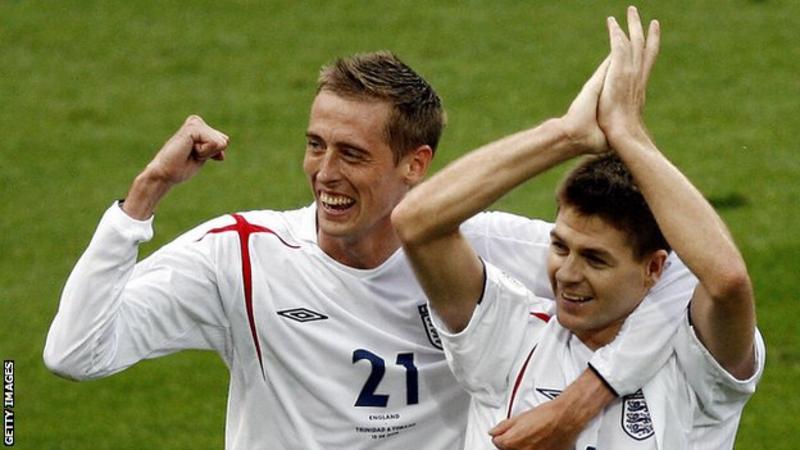 Among the perplexing things that occurred at Crouchfest last month – the Liam Gallagher walk-on, the spontaneous performance of Snow’s Informer, the fact that something called Crouchfest was taking place at all – was something unnoticed that happened with a small inflatable football.

These footballs were being booted from the stage into the crowd, in part a faux-homage to Rod Stewart’s traditional festival antics, in part because everyone involved had secretly always wanted to boot footballs into a crowd from a stage.

I attempted a cross-stage lofted pass to Crouch and, being considerably outside my comfort zone, mishit it way over his head. He turned, stretched out a leg, caught it on his toes, flicked it up, juggled it with his head and then side-volleyed at a flat angle above the heads of the half-cut crowd.

It was astonishing to witness. ‘Bloody hell’, you found yourself wanting to shout. Did you see that? And then the second thought hit you: ‘Oh yeah. He’s an elite footballer’. He played for England at World Cups. He scored more goals for his country than Steven Gerrard, David Beckham or Kevin Keegan. Of course he can do that.

And he really was good. More Premier League assists than Cristiano Ronaldo or Paul Scholes, more Premier League goals than Fernando Torres or Dennis Bergkamp. A goal for England every 99 minutes, compared to Gary Lineker’s one every 136 minutes, to Michael Owen (155 minutes) or Alan Shearer (182).

He announces his retirement having scored more headed goals in the Premier League than any other player in history. It is a record unlikely to be beaten, the way the game is being played, but it is also a statistic that adds to the deception about his wider abilities.

He has known for a while that it is the right time. Two-minute sub cameos can only take you through so many winters

Crouch grew up wanting to be Paul Gascoigne and Gianluca Vialli and his most memorable goals had enough of both to fulfil a portion of those teenage dreams: the overhead kicks for Liverpool against Galatasaray and Bolton, the one for Portsmouth against Stoke, the ridiculous flick-up and volley in 2012 from way out on the angle for Stoke against champions-in-waiting Manchester City.

Two decades close to the top of English football is quite enough to be satisfied with, two World Cups, a Champions League final. But it was less what Crouch did in football than how he did it that has left him with the reputation he has.

There was the underdog part of it: crying himself to sleep as a kid because of the teasing about his height, starting his professional career to chants of, “Freak! Freak! Freak!” and “Does the circus know you’re here?” Sent out on loan by Spurs to Dulwich Hamlet, to Hassleholm in the Swedish fourth division, then discarded for £60,000.

Having proved himself at QPR and then Portsmouth he still struggled to fit in. He went on holiday to Ayia Napa because all young footballers went to Ayia Napa. While there he realised that he looked as ridiculous in a sleeveless top as Rio Ferdinand looked fantastic. He hated the music so much that he used to hire a scooter and go off by himself to deserted parts of the island.

Even at the top, playing for Liverpool and England, hanging out with Gerrard and Beckham, he never lost his childhood love of the game.

One of the pleasures of doing the podcast and books with him is that he thinks and obsesses about the daft details of football just the same as those of us who would have sliced that Crouchfest volley into our own faces.

You start talking about free-kicks with him and an hour later realise that you are still talking about them and have trawled YouTube for the best and most neglected of all time. You can lose happy evenings discussing the Norwich City kit worn by Jeremy Goss or whether the post-retirement weight-gain of Jamie Pollock was more or less remarkable than the own-goal he scored for Man City. He is familiar both with Chris Waddle’s hit with Glenn Hoddle, ‘Diamond Lights’, and with Waddle’s forgotten gem with Basile Boli, ‘We’ve Got A Feeling’.

It meant he could appreciate the madness of the football explosion even as he was part of it: the former team-mate of his who hired a Ferrari just so he could park it directly opposite a nightclub and lie across the bonnet with his shirt half-open; the fashion choices of Djibril Cisse, who would wear glasses that had no glass in them and plug a 1920’s-style candlestick telephone into his mobile.

These were the sorts of insights that didn’t seem to be coming from other elite players. The fact that former Spurs full-back Benoit Assou-Ekotto would turn up for every match with a Tesco bag containing the same four luncheon items: a croissant, a hot chocolate, a full-fat Coke and a packet of crisps. That Alberto Moreno has a tattoo of chimp wearing glasses and Beats By Dre headphones and holding a gun.

Crouch has not been immune to the distractions of his profession. He has inadvertently paid £250 for a haircut and £800 for a jumper that he wore once.

He still talks about these excesses as if he were one of us rather than one of them. There are not many England strikers who have dressed up as a chicken and had their feathers trimmed at the Brighton branch of Toni and Guy, or got stuck into a game of Play Your Cards Right with Dev from Coronation Street on a Euston-bound train out of Stockport. There are anecdotes about Mickey Rourke and Madonna that are still to come to wider notice. The Rourke one might be the best of all.

Retirement will be hard for Crouch because he will miss all the fun and companionship football brought him. He has known too for a while that it is the right time. Two-minute sub cameos can only take you through so many winters.

Through it all, from his debut for QPR in September 2000 to his final game for Burnley in May this year, he never forgot that he was lucky to be doing what he was doing.

He started as a distinctive footballer and he ended the same way. A player who was a fan who was determined to extract enjoyment out of each day doing what he loved.

07/12/2019 Sport Comments Off on ‘Peter Crouch was a player who was a fan, determined to extract enjoyment out of each day’
Recent Posts