PARIS — Rafael Nadal and Roger Federer have covered so much ground together in 15 years and 39 matches, from playing for keeps in the fading light at Wimbledon to trying to make it through a promotional video without falling off their chairs laughing.

But on Friday, in their much-anticipated French Open semifinal, these amicable nemeses, whose rivalry has worn so well, got the chance to experience something new — even if the final result, a decisive Nadal victory at Roland Garros, was nothing novel.

On Friday, they had to deal not only with each other’s topspin forehands and inner strength, but also with the wind. Not some Paris-in-the-springtime zephyr, but something better suited to wintertime and the coast of Brittany.

Gust after gust sent Panama hats, napkins and, above all, red clouds of gritty terre battue flying into the players’ fields of vision and their psyches.

To both champions’ credit, they still produced some sublime tennis, if only in patches. There were drop shot winners that hit the clay and spun backward like wedge shots in golf; precision passing shots under duress; and, in the case of Nadal, cocksure crosscourt two-handed backhands that the 37-year-old Federer could only watch wistfully from afar as they bounced out of reach.

But for a change, there were also plenty of gaffes that once-a-month hackers could relate to: whiffed returns, shots off the frames and contortionist stances that made even the balletic Federer look as if he was learning to dance.

He was not alone. Novak Djokovic, who faced Dominic Thiem in Friday’s even more blustery second semifinal, is accustomed to twisting himself into all kinds of extreme positions as he covers the court like a tarp.

But as Thiem’s shots dipped and swerved and died without warning, Djokovic’s frustration became evident. He called the referee Andreas Egli on court to lobby for a stoppage because of the wind. Egli rebuffed him and explained that play could only be halted if the conditions posed a danger to the spectators or players. 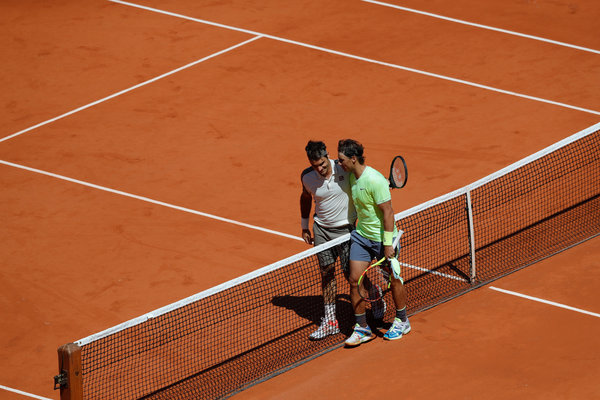 In this case, it was only a danger to peace of mind and quality of play. Thiem might have been fighting Djokovic. But Djokovic was fighting Thiem, the weather and himself.

“The guy in our weather station said we might get two more showers in the next hour and a half, so the matches would be stopped again,” said Guy Forget, the tournament director. “So the referee decided that there was no point in having the guys shower, dress, warm up and go play four games and then pull the covers again and then maybe do it again when we can finish the match on Saturday easily.”

Djokovic was seen on television leaving the grounds before the postponement was announced, but Forget said the tournament referee, Remy Azemar, had already informed both players of the decision. “People thought Novak left and that is why we canceled the matches, which is nonsense,” Forget said.

The predicted rain did not immediately materialize, but Djokovic did get a reprieve.

His match with Thiem is scheduled to resume at noon Saturday in Paris (6 a.m., Eastern time), meaning the winner will not get a day of rest before trying to stop Nadal from winning a 12th French Open singles title.

Nadal called the conditions “so difficult to manage.” He said it was a day “accept all the adversities and just be focused on the positive all the time.”

Frankly, nobody in the history of modern tennis has completed that to-do list for as long or as diligently as Nadal.

Beating him anywhere represents quite a climb, but beating him at Roland Garros remains K2 and beating him in the wind only adds to the altitude. Nadal can certainly attack and shorten exchanges, which has become an emphasis as he tries to preserve his body at age 33. But with his groundstroke-centric approach and deep court positions, he has more margin for error built into his game than someone like Federer.

Only two men have defeated Nadal at the French Open, and Federer is still not one of them — not by a long shot. He is 0-6 against Nadal in Paris and has yet to push him to a fifth set. Friday’s defeat was his second-most lopsided, ranking behind only the 2008 final, which Nadal won, 6-1, 6-3, 6-0.

“He has incredible abilities on clay,” Federer said. “I knew that ahead of time. I don’t look like I fight, but I do, and I tried to believe in it. I tried to turn the match around until the end. But the longer the match went on, the better he seemed to feel in the wind.”

The weather was not all that was strange Friday. This semifinal, the first meeting between Federer and Nadal in nearly two years, sparked global interest, but local interest seemed surprisingly tepid. The stands in Philippe Chatrier Stadium were only about half-full when the match started, even though the session was sold out.

Nadal, in his fluorescent yellow shirt, was hard to miss on this gray day, and he had to save his first break point just four minutes into the match. He held serve, but there would be three breaks in the opening six games as both men adjusted.

But Nadal had the last word in the set, taking the measure of a looping Federer forehand that landed deep and then answering it with a laserlike backhand winner to take the lead, 6-3.

Federer had beaten Nadal in their five previous matches, all on hardcourts, including the 2017 Australian Open final. Federer had changed the equation by being more aggressive and upgrading the punch and consistency of his backhand drive with the help of a larger-headed racket.

“Roger’s backhand has improved a lot, and he caught us by surprise in Australia,” Carlos Moyá, Nadal’s coach, said before Friday’s rematch. “After that, we knew we had to change something, and for sure on clay it is easier for Rafa to change a few things against these guys who are trying not to give him any rhythm.”

Federer’s backhand is no doubt more penetrating than when he last faced Nadal at Roland Garros, in the 2011 final. But Nadal kept tracking down Federer’s best efforts and rebooting the exchanges.

The match turned for good late in the second set when Nadal hit a forehand passing shot to hold to 4-4, then reeled off the last nine points of the second set after breaking Federer from 40-0.

The rest, as so often happens with Nadal on clay, felt like a foregone conclusion even if there were surprises, like the code-conduct violation Federer received after smashing a ball high into the stands after losing his serve in the third game of the final set.

Federer, who had skipped this tournament the past three years, still has the French public in his corner: There were chants of “Roger” all match and also after the defeat as he waved farewell. But Nadal has the trophies, so many trophies, and a 12th Coupe des Mousquetaires is just one victory away.

“It is incredible being honest, no? Is something very special and difficult to explain, but here we are,” Nadal said. “Even if it’s something I never dreamed about five, six, eight years ago, it’s happening today. And my goal is just try to keep going. It’s not about having an excess of ambition, but is just about trying to keep enjoying the things that I am doing.”

In the wind, in the calm, he does them so well at Roland Garros.