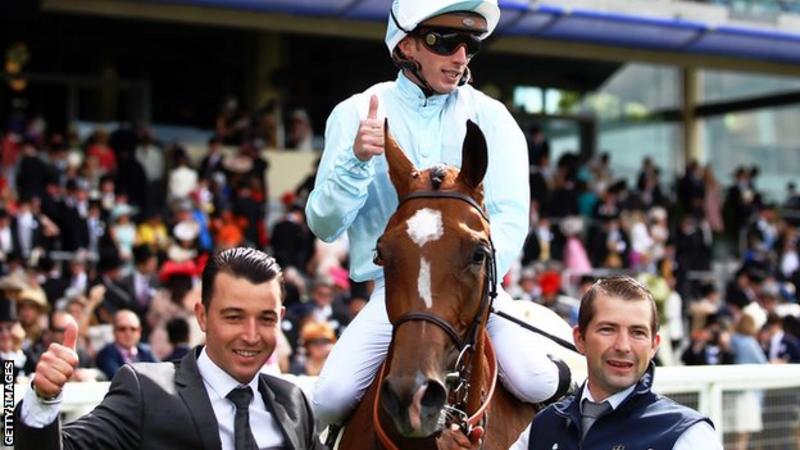 Watch Me took a surprise win in the Coronation Stakes at Royal Ascot.

Pierre-Charles Boudot guided the 20-1 shot home ahead of even favourite Hermosa, with Jubiloso in third place.

Hermosa was widely expected to complete a hat-trick of Group One successes having already won the English and Irish 1000 Guineas this year.

In-form jockey Frankie Dettori, who won four races on Thursday, earlier got his seventh win of the week with 8-1-priced Advertise in the Commonwealth Cup.

Aidan O’Brien’s Hermosa, ridden by Ryan Moore, appeared well positioned for much of the one-mile Coronation Stakes contest as she tracked Pretty Pollyanna.

But she eventually came up short as French challenger Watch Me, who is trained by Francis-Henri Graffard and was only sixth in the French 1,000 Guineas last month, pulled clear to win by a length and a half.

There had been earlier disappointment for O’Brien and Moore as even-money favourite Ten Sovereigns finished fourth in the Commonwealth Cup.

Advertise prevailed by a length and a half in the colours of Phoenix Thoroughbred Limited, with nearest challenger Forever In Dreams representing a new venture for the same ownership, Phoenix Ladies Syndicate, who only bought the filly this week.

“It was just lucky that Frankie was able to ride him as that made a huge difference,” said trainer Martyn Meade.

O’Brien did enjoy success in the King Edward VII Stakes, however, as Japan ran out a dominant winner to give the trainer his 70th win at the Royal meeting.

Jockey Moore guided the 6-4 favourite past the post four and a half lengths ahead of second-placed Bangkok, as Eagles By Day came in third.

“We were delighted with that. Everything has been right with him and he’s been progressing all the time,” said O’Brien.

Favourite Daahyeh gave David Egan a first Royal Ascot winner with victory in the Albany Stakes, finishing a length and a half to the good from runner-up Celtic Beauty, with Aroha in third.

“I thought we would be second with half a furlong to run,” said trainer Roger Varian.

“It is the first time she has been in a scrap and it took a few strides for the penny to drop – on the line she is a good winner.”