Ask any of Australia’s best swimmers and they’ll tell you the Olympic trials are more stressful than the Games themselves. None of the training and focus matters if you can’t rise when the stakes soar.

This year’s trials begin in Adelaide on Saturday, just six weeks before the start of competition in the Tokyo Olympic pool. After months of heavy work, the swimmers will be tapered and fresh and will need to be; Australia’s qualifying marks are demanding and designed to see the cream rise when it matters. 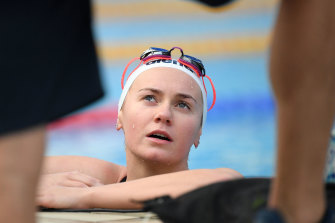 Ariarne Titmus has had a difficult buildup to the trials.Credit:Getty

Will Mack Horton be able to defend his Olympic gold?

The Victorian was one of Australia’s breakout stars in Rio, winning a famous 400m freestyle battle with Chinese rival Sun Yang. But since then, Horton has had mixed form and only qualified for the 2019 FINA World Championships through the side door after qualifying as a 200m relay swimmer. He rose to the occasion to take 400m silver but has struggled badly in lead-up meets this year, although that’s not unusual for him in hard work. Even so, with new faces like Elijah Winnington on the scene, Horton must be at his best to earn the right to try and go-back-to-back. It could be all or nothing.

The rise and rise of Kaylee McKeown

The 19-year-old backstroker and medley swimmer from Queensland’s Sunshine Coast has attempted to fly under the radar ahead of the Games, or at least that’s what her coach Chris Mooney had hoped. But when you blast out the kind of times McKeown has been laying down, that’s not an option. She’s set world-leading times in the 100m and 200m back and the 200m IM and will swim all three in Tokyo. She has major competition in American teenaged world record holder Regan Smith but McKeown will take some serious beating. Don’t discount a world record in Adelaide. 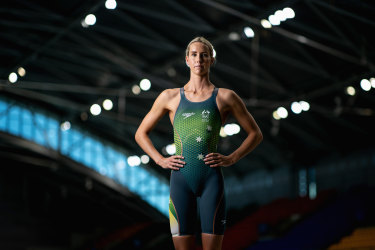 Emma McKeon bursts out of the shadows

The career-best swims of Emma McKeon are becoming one of the feel-good stories of Australian swimming ahead of the Olympics. A prolific minor medal winner at all levels and key player in relays, McKeon has been the kind of invaluable team player every squad needs. Now she is shredding personal bests and has emerged as a major medal contender in the 100m freestyle, 100m butterfly and perhaps her best chance, the 200m freestyle. We’ll know how serious those claims after Adelaide but the Michael Bohl protege looms as a massive danger in the Tokyo pool.

The Olympic 100m freestyle champion will be determined to put the world on notice in his home pool, especially key rivals like Caeleb Dressel and Duncan Scott. He’s another who has battled a shoulder injury, having surgery late last year, but has shown enough in the lead-up meets to suggest he’s going to go low once he hits top gear during his taper. Dressel is the world champion and Chalmers has been working relentlessly on his technical skills (dive, turns, underwaters) to close the gap. He’ll want to nail all of those under pressure in the trials pool. 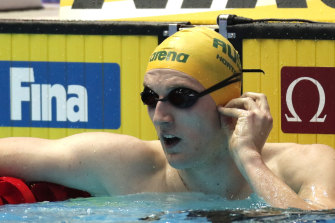 Can Cate Campbell put herself back into the medal frame?

At her best, Campbell is still one of the elite freestyle sprinters in the world. But at 29, she knows it’s going to be her last serious roll of the dice at an Olympic Games and this year she hasn’t been able to get past 100m rival McKeon. For so many years, Campbell and sister Bronte have dominated the spring landscape but both have questions to answer in Adelaide. It would be foolish to doubt a swimmer with the pedigree and times of Campbell so expect her to hit back hard in her pet races.

Can Cody Simpson make a splash?

One of the biggest stories in Australian swimming has been about Cody Simpson, the pop star who has returned to his competitive roots to follow his dream of making that team for an Olympic Games. He settled on the 100m fly as his main race but has always maintained Paris 2024 was his main goal. He’s only been back in training since last year and has already shown significant improvement. But with the qualifying standard a top eight world time from 2019, the clock may beat Simpson on two fronts. Making the final would be a tremendous achievement. 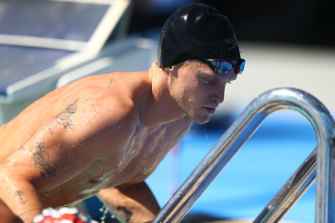 Simpson at last month’s national championships on the Gold Coast.Credit:Getty

Has Mitch Larkin decided on his Olympic program?

Former world champion backstroker Mitch Larkin has been in sensational touch this preparation but has a major call to make ahead ot Tokyo as he tries to pick between his 200m backstroke or his 200m IM. He’s a genuine medal contender in both but the schedule dictates he won’t be able to try and produce the quinella. He will try to qualify for all three in Adelaide before deciding where his future lies. A first Olympic gold may depend on his choice.

The race for relay spots

Australia reaped the rewards for a huge relay focus at the 2019 World Championships and they hope to repeat the dose in Tokyo. Among the best medal hopes are the women’s 4x100m freestyle relay (defending champions and world record holders) and the women’s 4x200m freestyle quartet, which might well be the best gold medal bet for Australia on the entire program. With McKeon, Titmus and Madi Wilson virtual locks, there will be a mad scramble for final spots.

Who can deliver when it counts in new trials format?

Australia went into Rio with a host of top-ranked swimmers but only a select few Dolphins were able to step up to the plate. Swimming Australia has changed their program to mirror the American trials and it’s worked well so far, with good returns at Pan Pacs, Commonwealth Games and world titles. Now the real test arrives. Head coach Rohan Taylor needs them to be hitting the qualifying marks, then lowering those times, once they get to Tokyo. If that’s the case, his team has enough quality to make a real mark at the Olympics.

06/07/2021 Sport Comments Off on Sink or swim: 10 storylines to watch as Olympic dreams go on the line
Recent Posts