Black Jack has taken out line honours for the 2021 Sydney to Hobart as battering conditions saw the slowest race to the finish line since 2004.

The 100-foot yacht, skipper by Mark Bradford, arrived at Constitution Dock around 1.30am AEDT and crossed the finish line after 2 days, 12 hours and 37 minutes.

The last time the line honours winner in the Sydney to Hobart took so long was in 2004, when Nicorette III crossed the finish line in 2 days, 16 hours and 44 minutes.

Dangerous conditions resulted in 36 of the 88 boats that started the race on Boxing Day being forced to retire before getting to Hobart.

Black Jack led the depleting pack for the majority of the race but was beaten out of the headlands by super yacht rival Scallywag. LawConnect, which was locked in a fierce battle with Black Jack throughout the last two days, is set to enter Constitution Dock in second place, with Scallywag in third.

Black Jack last claimed line honours in 2009 under the name Alpha Romeo. Most recently, it finished fifth in the 2019 Sydney to Hobart and came second in 2018 after being pipped to the post by Wild Oats XI by just 28 minutes.

This year, the yacht’s owner Peter Harburg did not sail with his Black Jack crew for the first time. The Queenslander opted to stay on land this year and was at the dock to greet his crew in the early hours of Wednesday morning. 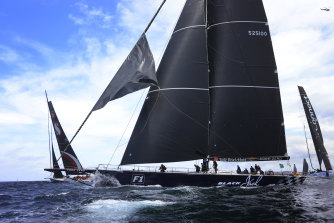 Black Jack may have been beaten out of the Heads but refused to be pipped to the post in Hobart.Credit:Getty

The super yacht is named Black Jack in honour of car racing legend and friend of Harburg, Sir Jack Brabham.

Overnight, Harburg described the final stages of the race as a “nervous wait”.

“I’ve never felt this feeling before,” he said on Tuesday.

“It’s strange because I’ve always been on the boat when its racing and you keep busy. You don’t think about it the way you do when you’re ashore waiting.”

Sports news, results and expert commentary. Sign up to our Sport newsletter.