The cancellation of the October series between Australia and England has tempered the exciting appointment of Liz Watson as the 25th captain of the Diamonds and Stephanie Wood her deputy.

Whilst the reasoning for cancelling the tour can’t be argued with – the difficulty of getting England into Australia along with the quarantine requirements involved were a bridge too far – it doesn’t take away from the fact that this is a massive blow to the Diamonds as they look towards next year’s Commonwealth Games.

Having just come off an historic series win in New Zealand against the Silver Ferns, the English Roses would have been a stern test for a Diamonds outfit playing their first series since the March Constellation Cup. 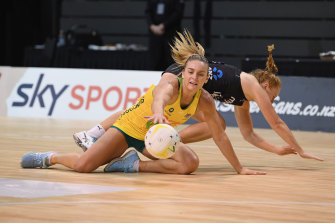 Diamonds captain Liz Watson in action against New Zealand at the Constellation Cup in March. Credit:Getty

What is exciting about this current Roses squad is their depth. For their first series win in New Zealand they were without Australian-based superstars Jo Harten, Helen Housby and Nat Haythornthwaite. After playing in last month’s Super Netball grand final the trio were given some time off and scheduled to join their national side on the Australian leg of the tour. That England were able to beat the world champion Ferns twice without a clutch of their biggest stars bodes well for the defending Commonwealth Games champions, and sends out a warning to their rivals.

For the Diamonds, the series against England would have been a good opportunity to bed in the new leadership group as well as a litmus test to see just where they sat in the world netball pecking order. It also would have given the Diamonds players much needed practice under the rules that govern the international version of the game. Super Netball’s time-outs and rolling subs means that domestic netball is played with a different rhythm, with coaches able to halt proceedings and speak to their charges mid-quarter.

Under international rules, the onus is on the players to recognise if something needs changing mid-quarter and change the game on the run, rather than relying on the coach to do it for them. International rules require players who are able to think their way through a game, recognising patterns in real time and adjusting accordingly. During my time in the Diamonds our coach, Norma Plummer, spent hours getting us to understand the game plan, and selected players who were able to both recognise when change needed to be made and then do it on the run. Over a decade later nothing has changed – smart players are the key to winning internationally – and that brings me to the Diamonds’ new leadership.

Watson is one of the best athletes in the game, and prior to her season-ending injury would easily have been counted as one of the world’s best players. Her ability to physically and mentally dominate the mid-court is crucial. She is incredibly popular with and well respected by her teammates, with an ability to remain calm and focussed in any situation. Off-court she is mature and thoughtful, and will represent the Diamonds well.

Watson’s appointment wasn’t a surprise given that she was temporarily handed the reigns for the Constellation Cup series against New Zealand. After taking over from Caitlin Bassett for the second test, she captained them for the third match and at that moment the fates of Watson as the new leader and Bassett as the outgoing skipper were sealed.

For Bassett, it is a disappointing way to end her tenure as leader. She will forever have a place as a Diamonds captain at a world cup. Her challenge now lies in rehabilitating her injured knees and securing game time at club level in order to push for Diamonds selection.

Whilst Watson was an obvious selection as captain, the move to appoint Wood as her vice-captain was not so, although it probably should have been. Wood is one of the smartest players in world netball. Her ability to read the play, to set the play and to execute the play are second to none, and her passion for winning is well known. She will need to be the bad cop to Watson’s good, keeping the troops honest as Australia tries to pick itself up off the canvas after defeat in the last two major tournaments.

With no tour there will be no team announced, which in some circles has begged a question. Why announce a captain and vice-captain when you aren’t announcing a team? In my opinion it is a smart move on behalf of coach Stacey Marinkovich and new Netball Australia CEO Kelly Ryan. Marinkovich needs to set the standards within her squad early, and that means formally establishing the leaders to ensure that they have as much time as possible to get comfortable with their new roles and work with the coach and the team on getting the Diamonds ready to win.

Netball in Australia also needs a spokesperson, a figurehead who is well recognised and respected. The position of Diamonds captain is one of the most important and influential roles in the organisation, and needed to be filled on a permanent basis as a matter of urgency. Now that is has been done, Netball Australia must provide all of the resources necessary to set Watson and her team up for success.