Coach Briony Akle slammed the officials after the NSW Swifts lost a nine-point lead and their dream of back-to-back premierships by going down to the West Coast Fever 67-62 in their Super Netball major semi-final.

The Swifts dominated in the first half and held a comfortable lead but the Fever staged one of the biggest comebacks seen this season, drawing level in the third quarter and then taking control in the last to claim an improbable win. 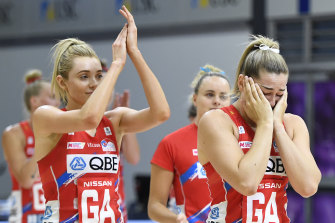 Helen Housby and a dejected Sophie Garbin of the Swifts.Credit:Getty Images

A frustrated Akle said a number of harsh calls from the umpires cost her team with their season on the line.

"I'll be honest – I don't care," Akle said. "That was our season on the line and some of those calls were really obvious, there was about three replays … it is really disappointing."

"Definitely something was wrong, it was black and white. I don't think there was one that was a 50/50 call … that call is or it isn't and it happened three times."

Akle said the Swifts' possession game ultimately let them down.

"This really hurts," Akle said. "We had control for a lot of that game and I think because you taste the success, you taste that premiership, you want it even more so it probably makes it hard, the pressure.

"We got a lot of ball back … it was probably the consistency of not scoring off those gains, that's probably what is most devastating."

Swifts captain Maddy Proud was in tears during her post-match interview.

"For the whole team you can see the reaction, tears and screams and everything," she said. "We said that we never wanted to feel like this again. For me personally, the one taste of finals that I've had has been lost and that is tough."

Despite the Swifts walking away with better shooting accuracy at 89 per cent compared to the Fever's 84, player-of-the-match Sunday Aryang proved too powerful.

Aryang finished the game with a stellar box score of six gains, five intercepts, three deflections and one block.

"The first half was quite nervous," the 19-year-old said. "I'm so happy with my team, they did amazing."

Swifts shooter Sam Wallace was eager to stamp her presence on the first quarter, with her immaculate shooting accuracy edging her side to a 17-15 lead.

There was drama in the second quarter, with Fever captain Courtney Bruce falling to the ground due to an eye poke from Wallace. But the Swifts managed to take control in the last five minutes of the first half, with Super Shot expert Helen Housby pushing her side to 36-29.

But a mammoth shooting effort from Jhaniele Fowler in her 100th game pushed the Fever to 48-48 in the third quarter before they went on with the job.

The Swifts will now head home to Sydney, while the Fever play Sunshine Coast Lighting next weekend to decide who will face the Melbourne Vixens in the grand final on October 18.

10/04/2020 Sport Comments Off on ‘Something was wrong’: Swifts coach slams umpires after semi-final loss
Recent Posts
We and our partners use cookies on this site to improve our service, perform analytics, personalize advertising, measure advertising performance, and remember website preferences.Ok