HARRY KANE was left fuming after his winner was controversially disallowed for Tottenham at Southampton.

The stat thought he had secured the points after he met Harry Winks’ pass over the top. 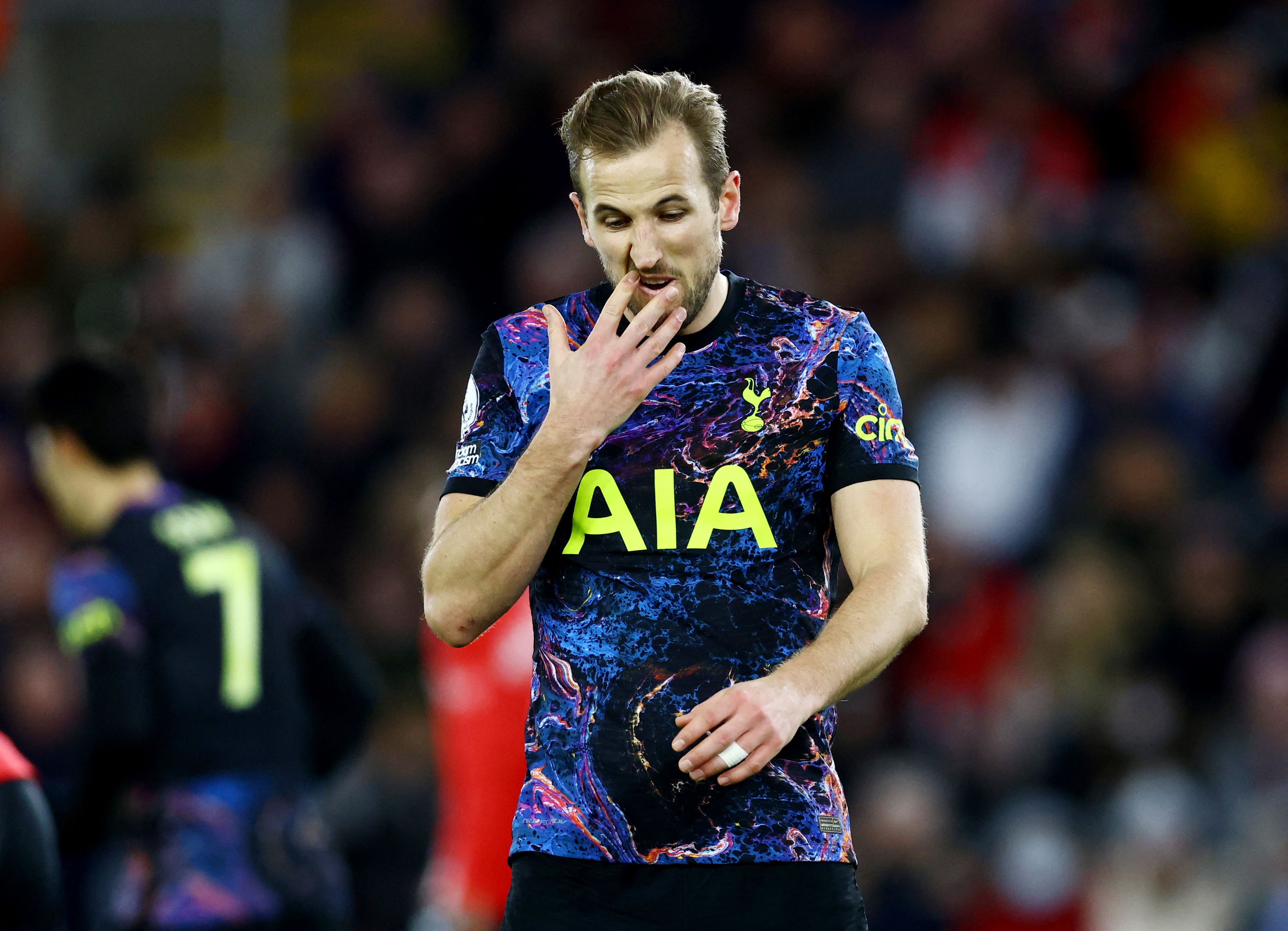 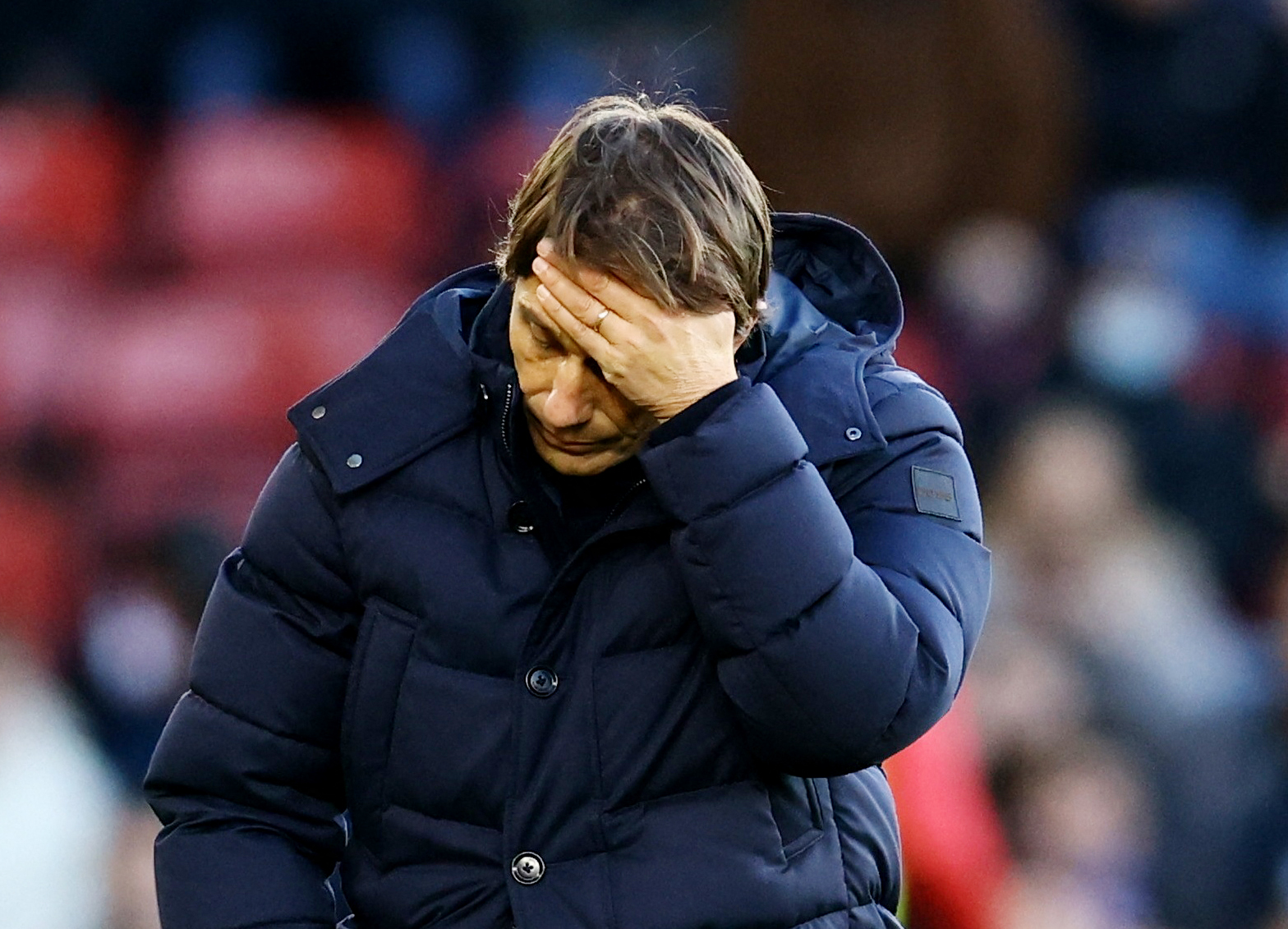 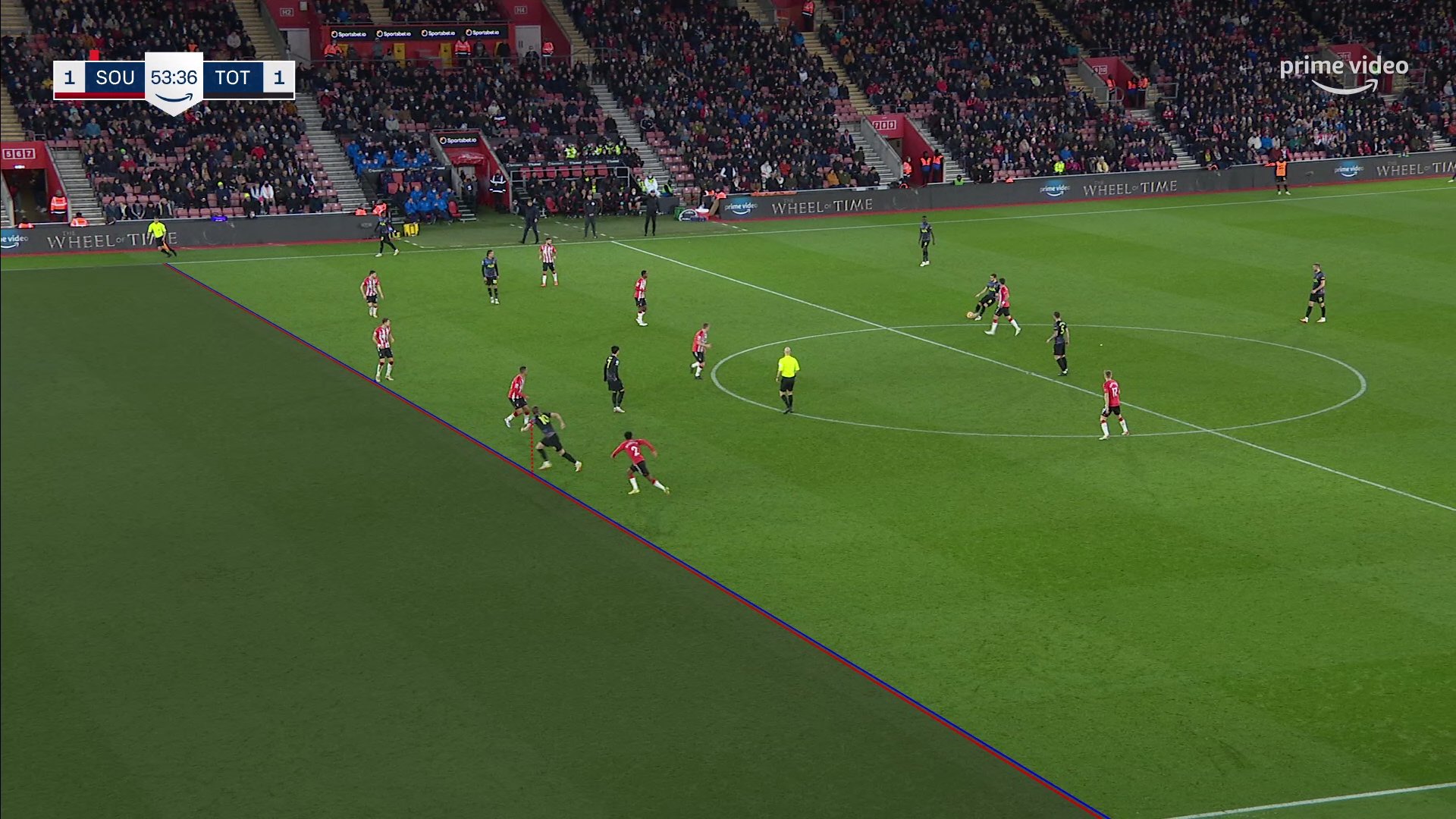 But VAR ruled it out for offside – and it literally could not have been any tighter.

And the decision left fans watching at home raging as well as the forward.

One tweeted: “I thought these marginal, armpit offsides had been cut out? That Kane goal should not be disallowed.”

Another wrote: “Why is it measured on Kane's arm but not the defenders?”

While another said: “That’s literally a perfectly timed run. Given what the offside rule is actually for these right calls are actually dumb as f***.”

Boss Antonio Conte will celebrate with 7UP after making history at Spurs after this draw.

But he should have toasted a victory with champagne after his Tottenham team played against TEN MEN for 49 minutes.

Southampton skipper James Ward-Prowse had threatened to drive a hole through that record when he performed his trademark golf swing celebration after firing the hosts in front with a stunning first-half strike.

But Kane’s penalty four minutes before the break – which also led to Saints defender Mohammed Salisu being sent off – maintained his manager’s magnificent start.

It could and probably should have been even better for Conte.

But Kane had another effort ruled out by VAR and Southampton keeper Fraser Forster was lucky to have an own goal chalked off by ref Anthony Taylor as Spurs failed to make their extra man advantage tell.

Yet the fact we are talking about Tottenham not winning when they have just extended their unbeaten Prem run to seven matches shows how far they have come under Conte since his appointment last month.

As for 10-man Saints they should be happy with this hard-fought point on the back of their thrilling Boxing Day win at West Ham.

Southampton boss Ralph Hasenhuttl made six changes to his starting line-up, revealing before kick-off that Che Adams had been ruled out after testing positive for Covid. 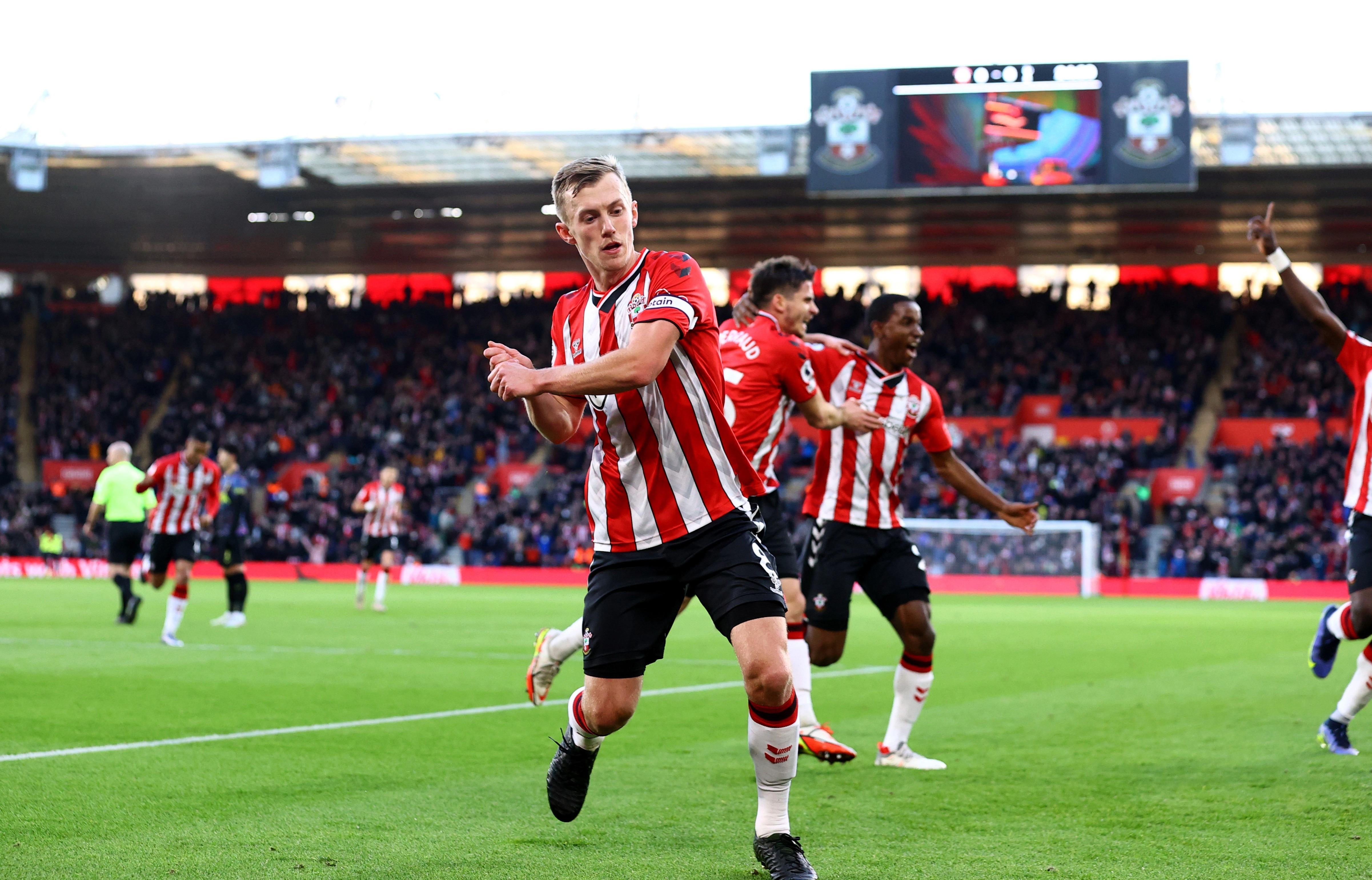 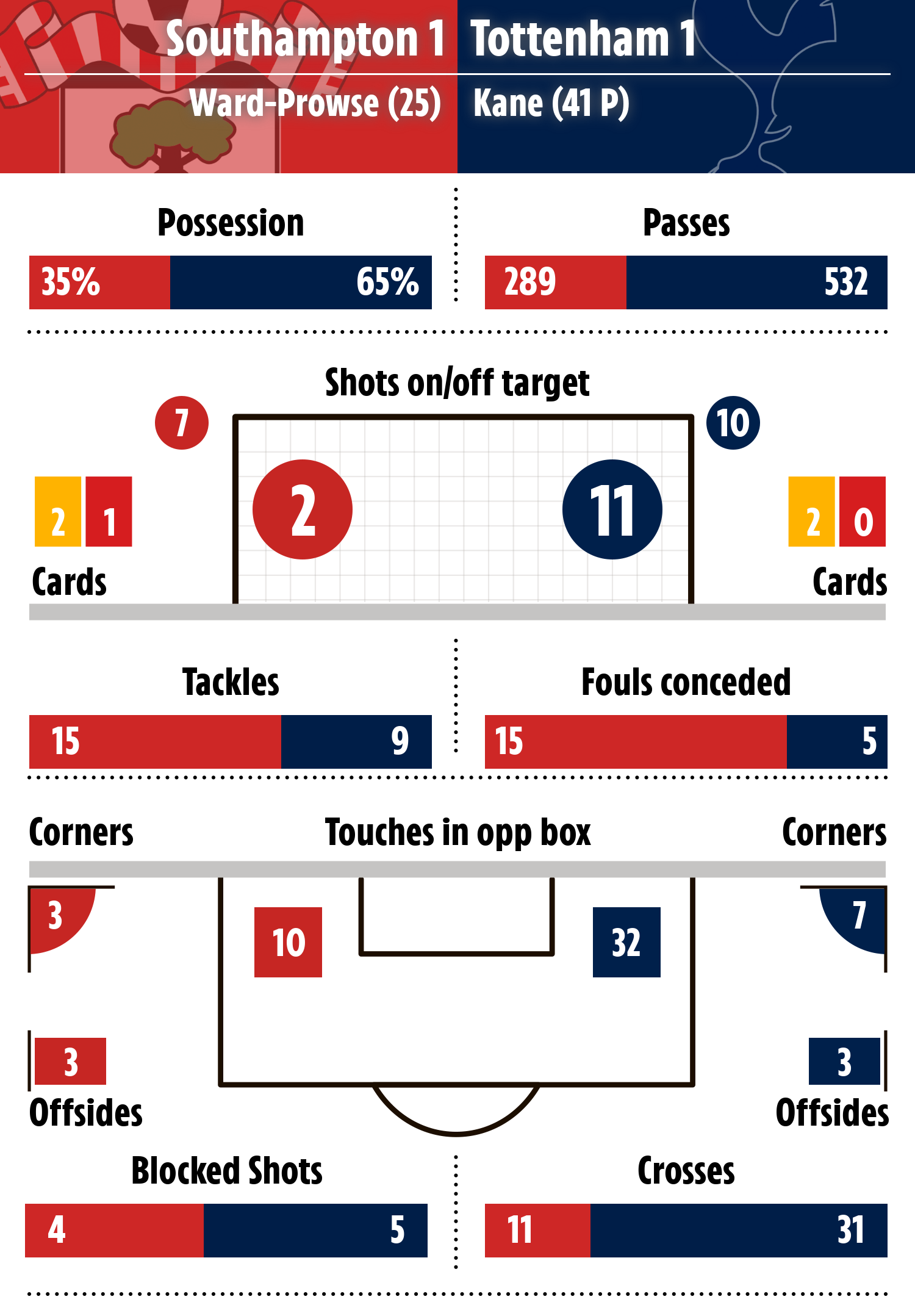 And the Austrian could have done with his Scotland international striker when Shane Long wasted a good chance to give the hosts the lead as glanced Kyle Walker-Peters’ cross wide in the sixth minute.

Adam Armstrong then headed over and Yan Valery blazed a long-range effort as Saints started the brighter.

Ex-Spur Walker-Peters was booked for dragging back Sergio Reguilon as the Tottenham left wing-back threatened on to Harry Kane’s brilliant crossfield pass.

And from Son Heung-min’s resulting free-kick, Ben Davies thought he had headed the Londoners into a 15th minute lead – but his effort was rightly ruled out for offside.

But there was no disputing Ward-Prowse’s strike, which gave Saints the lead in the 25th minute.

When the Tottenham defence failed to clear Salisu’s long throw into their penalty area, the ball fell kindly to the Saints skipper loitering with intent just outside it.

And the midfielder lashed a first time shot past Spurs keeper Hugo Lloris into the corner of the visitors net.

It was Ward-Prowse’s fifth club goal of the campaign and no more than the Saints deserved following their superiority in the opening exchanges. 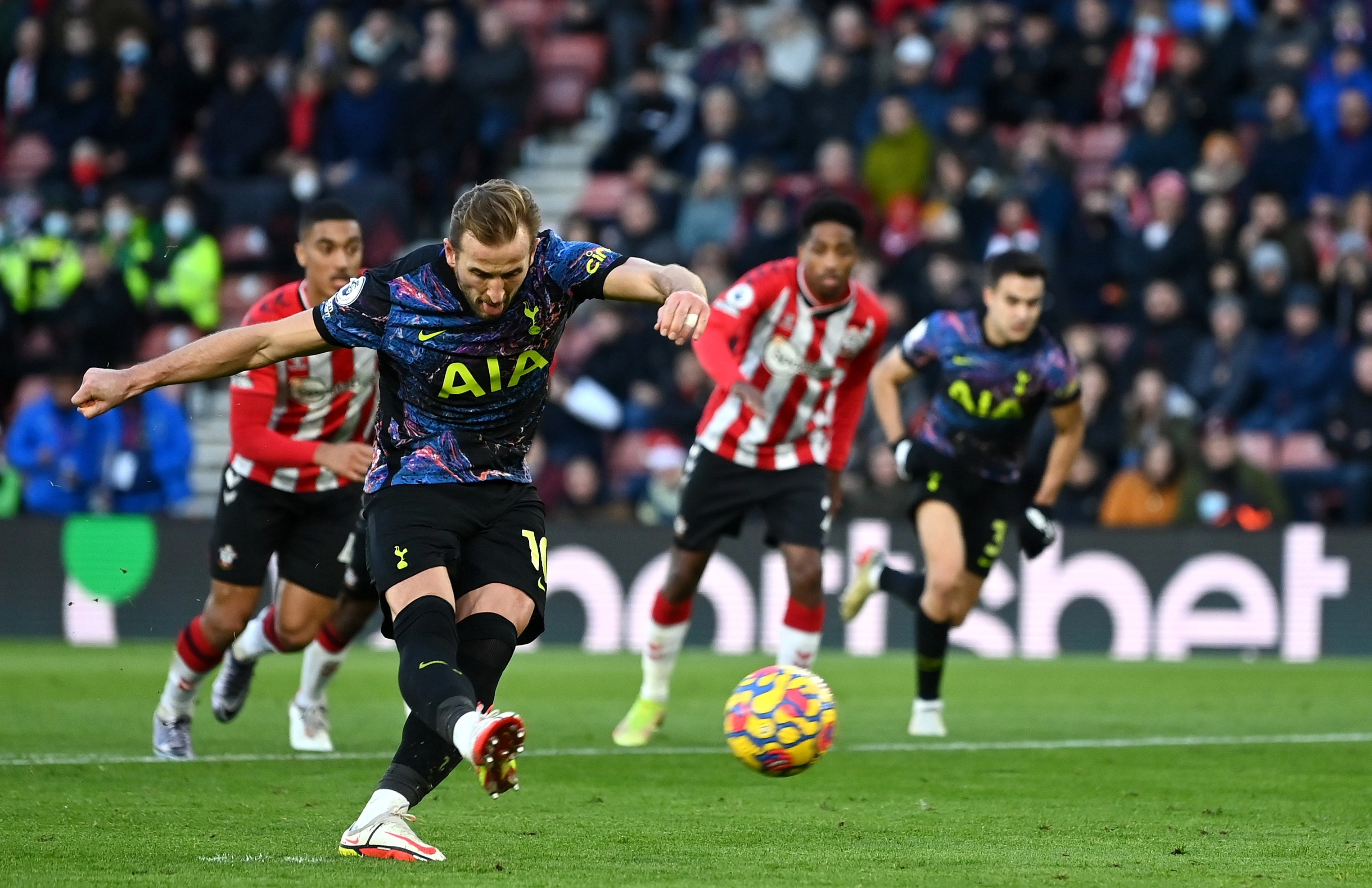 Kane and Son each had efforts from outside the box saved by home keeper Fraser Forster as Spurs fought to find a way back into the game before the break.

And they found themselves level thanks to Kane’s 41st minute penalty.

Ref Anthony Taylor awarded it after Son was brought down by Salisu as the South Korean advanced into the area from Harry Winks’ defence-splitting pass.

Saints defender Salisu, having been booked for an earlier foul on Emerson Royal, was shown a red card after being booked for the foul.

And Kane made no mistake from the spot as he smashed his penalty into the top corner.

The England captain has now netted for three successive top flight matches as he banishes fears caused by his earlier season form.

He has also been involved in 17 goals in 12 League starts against Saints – 11 goals and six assists.

He looked to have added another goal in the 53rd but his touch and finish from another telling Winks through ball was ruled out for offside by VAR Martin Atkinson.

Saints then had another let-off when their keeper Forster appeared to drop then back heel the ball into his own net after failing to collect a looping Winks cross.

But ref Taylor ruled the stopper had been impeded by Spurs sub Matt Doherty.

Conte also sent on Lucas Moura for the closing stages and the Brazilian had a couple shots saved by Forster.

While only a superb block by Spurs defender Davinson Sanchez prevented Armando Broja from firing a shock last-gasp winner for Southampton. 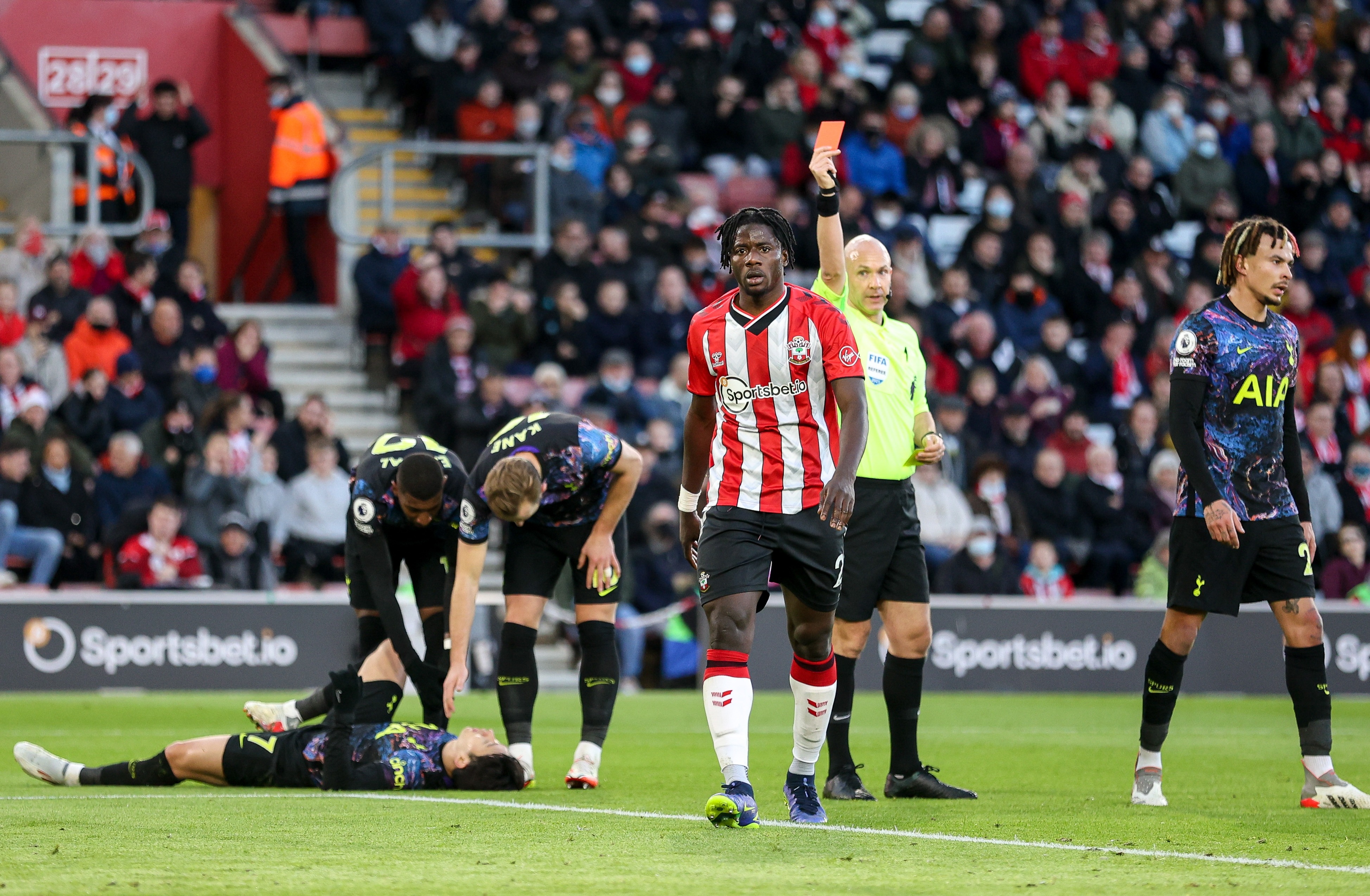