SAN ANTONIO — Stanford snapped a 29-year title drought to end a season that at points seemed uncertain to be completed during the coronavirus pandemic, claiming the N.C.A.A. women’s basketball championship with a tight win Sunday over Arizona, 54-53.

Stanford led for much of the game and started the fourth quarter up 3 points. But Arizona guard Aari McDonald, who had scored the most points by any player in the tournament before Sunday’s game, started beating Stanford’s defenses and closed Arizona’s deficit to 1 on a step-back jumper with 3 minutes, 35 seconds left.

Stanford’s Haley Jones, whose game-winning shot helped the Cardinal defeat top-seeded South Carolina in the Final Four and who led them with 17 points Sunday, added a free throw to offer the Cardinal a cushion, but McDonald was hot. She got closer with a free throw, then had a final opportunity after Stanford turned it over on a shot clock violation with less than 6 seconds left.

Her last-second jumper, a turnaround heave as she was swarmed by three Cardinal defenders, bounced off the back of the rim as time expired, delivering the Cardinal their third title in program history.

The battle between the teams that topped the Pac-12 Conference, then outlasted 62 others in the N.C.A.A. tournament, echoed the unusual circumstances of the tournament itself. Traditional powers like No. 1-seeded UConn and South Carolina and No. 2-seeded Baylor found themselves watching the title game from afar, and the field of 64 carried more teams that had a legitimate chance to win it all. They played against the backdrop of the public health crisis and questions about the stature of women’s basketball in an embattled college sports industry. But through it all, Stanford was considered one of the sport’s top teams and solidified that claim with its championship.

“We’re excited to win the Covid championship,” Stanford Coach Tara VanDerveer said in an interview on ESPN after the game.

The title game brought together Pac-12 rivals for the first time. It also featured one of the few Black coaches ever to reach the title game in a sport where more than 40 percent of players are Black. The tournament itself, a three-week bonanza running concurrently with the N.C.A.A. men’s tournament that was scheduled to conclude Monday night, became a forum for conversation about the inequities between men’s and women’s college sports.

It all played in front of a crowd that was equal parts cardboard cutouts and mask-wearing humans amid a pandemic that shuttered most large-scale in-person events over the last year.

The win was Stanford’s first national title since 1992 — all have been won with VanDerveer, who started coaching the Cardinal in 1985 and became the winningest coach in women’s college basketball history this season. In accordance with the pandemic’s ambience, she celebrated passing the longtime Tennessee Coach Pat Summitt on the career wins list with just her team and staff in a practically barren stadium 80 miles northeast of Stanford’s campus while local health restrictions prohibited them from playing at home.

The tournament, centered in San Antonio as a means to curtail the spread of the coronavirus, was not easy for Stanford even before the final game. It was almost knocked out by Louisville in the round of 8 and South Carolina in the Final Four.

But Stanford had to overcome much more this season, living as nomads for over two months while Santa Clara County, Calif., prohibited contact sports in November. Out of options, the Cardinal started practicing in Las Vegas, living out of hotels and playing home games in the beach town of Santa Cruz, a 45-mile trek along a windy road — worlds away from the Silicon Valley school.

“I don’t think any other team in this tournament had to live out of a suitcase, live out of a hotel for 10 weeks during the season,” Stanford’s Kiana Williams, a senior guard from San Antonio, said in a postgame interview. “We had to do that because that’s how bad we wanted to play.” 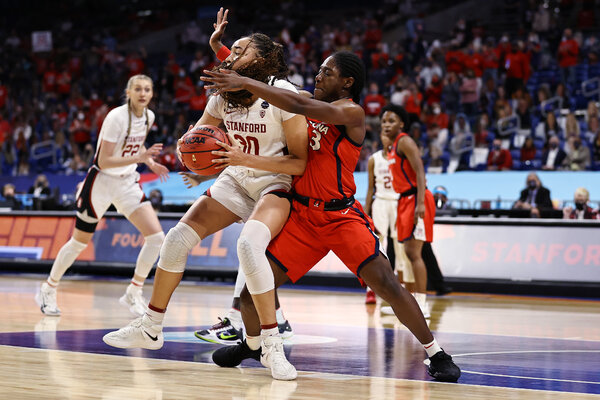 When they were able to play in their home arena again in February, athletes were isolated to their apartments at the outskirts of their training facilities, attending virtual classes and video chatting with loved ones as their only means to connect with people outside of their sports bubble.

The Cardinal bonded over the strange shared experience that saw them play mostly in-conference opponents, and they won both the Pac-12 tournament and regular season title. VanDerveer told reporters before the game that the conference’s strength warmed them up for the national stage. The league had four top-25 schools right before the tournament.

“Playing in the Pac-12, we got better as they got better,” VanDerveer said in a postgame interview.

Stanford beat Arizona twice this season, winning by 27 points in January and by 14 to win the regular-season title. Through previous matchups and lessons learned from Arizona’s tournament run, Stanford determined the key to winning was to suppress McDonald, who led her team to the final by scoring 26 points against UConn in the national semifinals. This was her 93rd consecutive game with double-digit scoring, the longest active streak in women’s college basketball. Redshirt senior Anna Wilson, the younger sister of Seattle Seahawks quarterback Russell Wilson, and freshman Cameron Brink had her locked down for significant portions of the game.

McDonald, the Pac-12 player of the year, fought her way through Stanford’s defense to earn 22 points on 5 of 20 shooting from the field and 4 of 9 from 3-point range.

“Aari, hands down, no doubt, is the best player in Arizona’s history,” Arizona Coach Adia Barnes said in a postgame interview.

The matchup with Arizona marked the first time that two Pac-12 teams faced each other in the finals; out of six in-conference championships for the national title, three were between Southeastern Conference teams, two were within the Big East and one was in the Atlantic Coast Conference.

The last time the Cardinal played in the national championship — 2010 in the Alamodome, when it fell to UConn — was the last time that a Pac-12 team did as well. At that point, the league was still the Pac-10, and Stanford was largely the national face it. Since welcoming the University of Utah and University of Colorado, Boulder, in 2011, Pac-12 teams emerged as a staple of the women’s Final Four with appearances by Oregon, Oregon State, Washington, the University of California, Berkeley and Stanford.

“It means that the Pac-12 is the best conference in the country,” Barnes said. “Start paying attention,” she added, “we have some of the best players in the country.”

Barnes, meanwhile, was fighting to become the third Black female coach to claim the N.C.A.A. title. She is one of five Black women to have coached in a women’s Final Four, following in the footsteps of C. Vivian Stringer, Carolyn Peck, Pokey Chatman and Dawn Staley; the national semifinals this year was the first time that two Black head coaches led teams simultaneously.

“We came within a basket of winning a national championship,” Barnes said. “I’m proud.”

This win marks an end to the teams’ stay in San Antonio, a controlled environment that offered a clear view of disparities between the men’s and women’s tournaments.

That, too, came into focus because of the virus.

VanDerveer said in an interview on Thursday that she did not think the inequities in the sport would have made the spotlight without the dual tournaments revealing differences in accommodations like coronavirus tests and facilities for the athletes.

“Covid has exacerbated everything,” VanDerveer said in an interview with The New York Times on Thursday. “It has challenged us in ways we were really maybe unprepared for.”