A stolen surfboard started it all for Tully White. An oil spill that trashed some of the world’s most iconic beaches only spurred her on.

The 22-year-old from Allambie Heights returns to Malibu this week for the world longboarding championship and her first crack at a world title, a “Surfers for Climate” sticker plastered on her board as a reminder of something bigger at play.

An Australian champion while still studying for her HSC, White enters this week’s final World Surf League longboarding event of the year ranked sixth in the world, aiming to claim the crown in predicted two-foot Malibu runners.

Last year’s venture to one of the richest beachside areas in the world included the requisite glimpse of California glamour – “Jonah Hill was at our after party” – and a sobering scene that White carries every time she hits the water.

“I was in California last year when there was an oil spill just off Newport Beach,” White told the Herald.

“The oil slick and tar that was washing up on the beaches was horrific and people were pretty much normalised to it, they weren’t alarmed or worried.

“All over the shore you’d get these little pieces of effectively asphalt washing up and big crews of people trying to scrub it off these rocks that were just covered in oil with people going past for a surf.

“It was just bizarre and I’d hate to see Australia ever to get to that point.”

White has been surfing from around the age of 12 and only found her way onto “the beaten-up family mini mal” when her own Christmas present was stolen off the roof racks of the family car.

A life since spent in the waves at Manly and Narrabeen sparked her interest in climate activism. 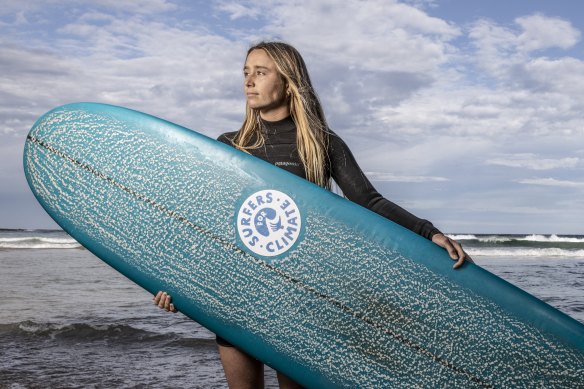 Tully White ahead of her world championship tilt in California this week.Credit:Jessica Hromas

Her own studies of environment science – specialising in climate change and sustainability – at Charles Sturt University have helped hone her voice and saw White become a foundation ambassador for the growing Surfers for Climate “sea roots movement” in 2019.

The recent cancelling of an Offshore Petroleum Exploration Permit 11 (PEP-11) – which proposed drilling for gas off the coastline of Manly and Newcastle – was too close to home for White given what she’s seen on tour.

“Bringing attention to those works that are going on and pointing out the impact on the ocean and the threat to the coastline is a big thing for Surfers for Climate,” White said.

“Communicating the science in a way that doesn’t have people switch off or walk away from you, that’s probably the key to it.

“A lot of media and coverage can make you think we’re all screwed but there are solutions out there and that’s the message I’d like to get out there.

“Surfers for Climate is about getting people involved in climate action that isn’t the absolute extreme, ‘stop everything you’re doing’.

“It’s about those first few steps – joining a paddle out or starting a conversation that encourages people to get involved at a grassroots level.

“There are avenues for petitions, how to approach your local MP and get involved without feeling like you are one-out in the process.

“It feels like the conversation’s changing around climate change and our involvement in rapidly accelerating it as humans. It’s no longer, ‘is it happening?’. It’s now, ‘what can we do?’”

News, results and expert analysis from the weekend of sport sent every Monday. Sign up for our Sport newsletter.