They weren’t supposed to meet this way, the new-look Liberty and their fans in sea foam green. The chants for Sabrina Ionescu, the 2020 No. 1 overall pick, were supposed to have echoed in Barclays Center last spring. She was supposed to rain down 3-pointers, and the Liberty were, fans believed, going to rack up wins.

But as with so much last year, things weren’t as they were supposed to be. The coronavirus pandemic delayed the W.N.B.A. season, Ionescu missed all but three games with an ankle injury, and the Liberty won just two games in a fan-less bubble environment in Florida.

Yet Liberty fans are now getting the introduction they wanted then, even as markers of the past year of turmoil — in basketball and beyond — remain. 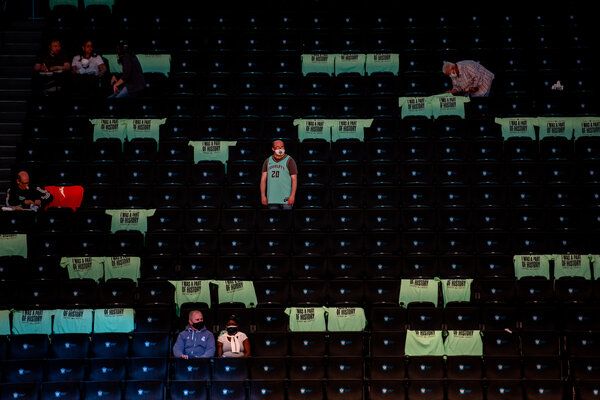 The socially distanced Barclays Center crowd of 1,139 at Friday’s season opener against the Indiana Fever had a new mascot, Ellie the Elephant, to cheer with them as, yes, Ionescu hit 3s (4 of 8) and the Liberty got their first win, 90-87. But the word on the front of the Liberty jerseys — equality — indicated that, as guard Layshia Clarendon has said, the game is about more than the game.

“We’ve been young Black girls who grew up, who are often underrepresented in our communities,” Clarendon, who is on the league’s Social Justice Council, said last week.

For some players, each game is a chance to prove wrong those who doubted them. Betnijah Laney won the league’s Most Improved Player Award with the Atlanta Dream last season after the Indiana Fever had cut her, but leading the Liberty with 30 points to beat the Fever on Friday? Well, that’s just rubbing it in.

And for others, a high-scoring game is not a message to the doubters so much as it is a nod to the fans. It’s saying, “You were right to believe in me.”

With 0.4 of a second on the clock in her first game played before those fans, Ionescu hit her fourth 3-pointer of the night. The crowd screamed, the Liberty bench rushed the court, and Ionescu said triumphantly, “I wanted it.”

Perhaps, if only for one night, that’s how it’s supposed to be.