Toronto Raptors guard Kyle Lowry was heavily pursued by three of the N.B.A.’s presumed title contenders — Philadelphia, Miami and the Los Angeles Lakers — before Thursday’s trade deadline. Yet Lowry, on his 35th birthday, did not get traded.

The Raptors’ decision to hold firm and keep Lowry, even though he will become an unrestricted free agent at season’s end, was perhaps the biggest surprise of a frantic trade deadline day in which 16 reported deals were struck.

After Toronto ultimately decided that none of the three primary bidders had met its demands for a trade package for Lowry, the league’s two Florida teams — Miami and Orlando — and the Denver Nuggets emerged from the deadline having made the most significant moves.

A breakdown of Thursday’s most notable business:

Why Kyle Lowry Is Still a Raptor

Lowry, widely regarded as the only player who both was likely to be traded this week and had the ability to affect the championship chase, acknowledged after the Raptors’ win Wednesday over the Nuggets that he might have played his last game with the franchise he helped win a title in 2018-19.

Amid all of Thursday’s activity, Lowry’s fate remained the greatest source of intrigue. The Raptors appeared to be clearing roster space to take the Lowry offer they found most palatable by agreeing to three trades to send Matt Thomas to Utah, Terence Davis to Sacramento and the much-coveted Norman Powell to Portland for Gary Trent Jr. and Rodney Hood.

Then the deadline passed with no trade. The Heat were unwilling to include the highly rated guard Tyler Herro in their offers for Lowry, while the Lakers refused to include the blossoming scorer Talen Horton-Tucker, according to a person with knowledge of the talks who was not authorized to discuss them publicly. Other factors contributed to the nontrade: Any team trading for Lowry naturally wanted to be sure it could re-sign him this summer, and Raptors officials went into the deadline pledging to send Lowry only to a destination he approved.

“We owe him that respect as a person,” Masai Ujiri, Toronto’s president of basketball operations, said Thursday night. 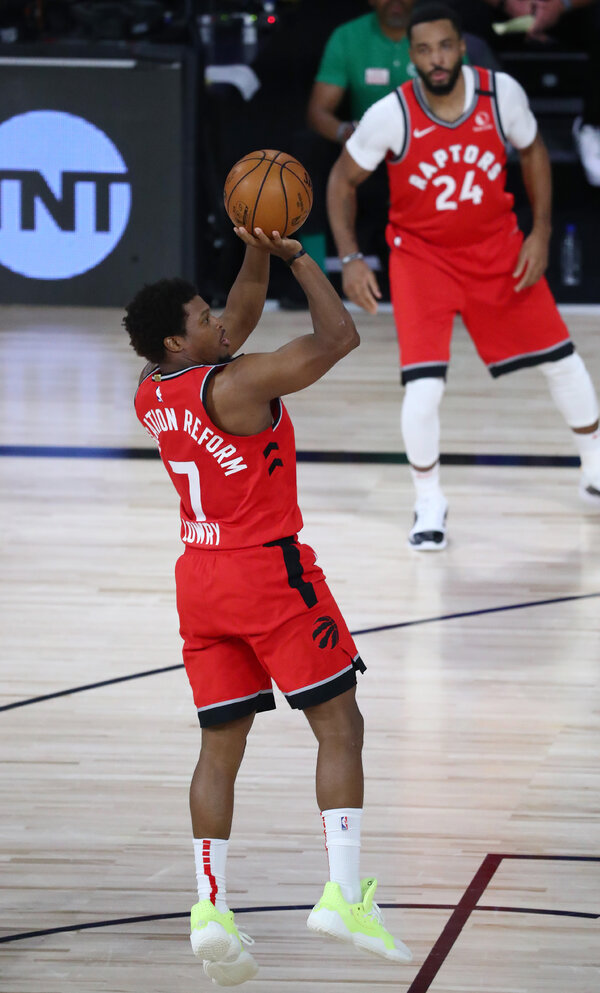 Toronto ultimately decided to take its chances with letting Lowry finish the season as a Raptor, with the hope that it can either sign him to a new deal in the summer or construct a sign-and-trade deal that prevents the Raptors from losing perhaps the most popular player in team history without compensation.

After its best Lowry offer was rebuffed by the Raptors, Miami turned instead to Houston to make a deal for Victor Oladipo, a two-time All-Star guard and another soon-to-be free agent. The Heat also agreed to a trade with Sacramento for the versatile forward Nemanja Bjelica after acquiring the veteran swingman Trevor Ariza last week.

As the deadline neared, Miami signaled it was out of the Lowry hunt by packaging the veterans Kelly Olynyk and Avery Bradley for Oladipo, as well as granting Houston the right to swap a 2022 first-round pick with Miami.

After just two months as a Rocket, and still recovering from the serious leg injury that sidelined him for more than a year in Indiana, Oladipo did not generate nearly as much trade interest as Houston had hoped when it acquired him from the Pacers in January as part of the four-team blockbuster trade that sent James Harden to the Nets.

Orlando Blows It All Up

Ravaged by injuries this season after a promising 4-0 start, Orlando broke from its reputation for operating in a measured fashion by aggressively embracing a rebuilding posture and trading away three players it has relied on heavily for years: center Nikola Vucevic, forward Aaron Gordon and guard Evan Fournier. Vucevic, the only 2021 All-Star dealt on Thursday, was traded to the Chicago Bulls. Gordon is bound for Denver, and Fournier is on his way to Boston.

After weeks of pessimism in rival front offices that Vucevic would be made available, Orlando gave deadline day an early jolt by packaging Vucevic and Al-Farouq Aminu to the Bulls for Wendell Carter Jr., Otto Porter Jr. and two future first-round picks. Chicago is eager to team Vucevic with Zach LaVine, another 2021 All-Star.

Denver, coming off a trip to the Western Conference finals, fortified its roster for another playoff run by outbidding the Boston Celtics to strike a deal with the Magic for Gordon. The Nuggets, who also agreed to acquire the veteran center JaVale McGee from Cleveland in a separate deal, are sending the veteran swingman Gary Harris, the rookie guard R.J. Hampton and a future first-round pick to the Magic for Gordon and Gary Clark, according to a person with knowledge of the trades who was not authorized to discuss them publicly.

Despite missing out on Gordon, Boston made good on its vows to shake up its roster in the midst of a disappointing 21-23 season by sending two future second-round picks and the veteran guard Jeff Teague to Orlando for Fournier, according to a person with knowledge of the trade. The Celtics were better positioned than the Knicks and other interested teams to absorb Fournier’s $17 million salary because of a $28.5 million trade exception they created in a sign-and-trade deal to send Gordon Hayward to Charlotte in November. Such trade exceptions allow teams to take in extra salary in trades rather than adhere to the league’s usual salary-matching rules.

The Hawks and Clippers Swap Guards

The Los Angeles Clippers, who had interest in higher-profile point guards like Lowry and Lonzo Ball of the New Orleans Pelicans, addressed their need for more playmaking by striking a deal with the Atlanta Hawks to acquire the four-time All-Star Rajon Rondo.

The Clippers had coveted Rondo in free agency last fall but lost out when Rondo signed a two-year, $15 million deal with the Hawks. The trade calls for the Clippers to send the high-scoring veteran guard Lou Williams and two future second-round picks to Atlanta for Rondo, who has missed games because of injury and made minimal impact as a Hawk.

Deals, and No Deal

Unwilling to go overboard in its Lowry pursuit, Philadelphia found a different path to fortifying its backcourt by assembling a three-team trade with Oklahoma City and the Knicks to acquire George Hill of the Thunder. The trade cost the 76ers two future second-round picks to each team and will also route the Knicks’ Austin Rivers to the Thunder.

Cleveland and San Antonio, as expected, were unable to find palatable trades for two former All-Stars with large contracts, Andre Drummond ($28.75 million) and LaMarcus Aldridge ($24 million). San Antonio immediately agreed to a contract buyout with Aldridge that will make him an unrestricted free agent if he clears waivers, with Drummond widely expected to follow the same path.

The Nets did not find a trade for the injured Spencer Dinwiddie. Despite a likely season-ending knee injury, Dinwiddie is expected to decline his $12.3 million player option for next season and become a free agent, which had the Nets looking for a potential deal to add to their depth and to avoid losing Dinwiddie for nothing.

It was the N.B.A.’s fourth consecutive deadline day to generate a double-digit number of trades. The frenzy hushed fears that the deadline would be quieter than usual in part because of the league’s new playoff format, which gives 10 teams a shot at the postseason instead of the longstanding norm of eight.

Entering Thursday’s play, only four of the league’s 30 teams were more than four games out of contention for the No. 10 spot in each conference: Orlando, Detroit, Houston and Minnesota. Numerous league executives have said that, in past years, teams more naturally fell into place as buyers or sellers with fewer clubs in playoff contention.