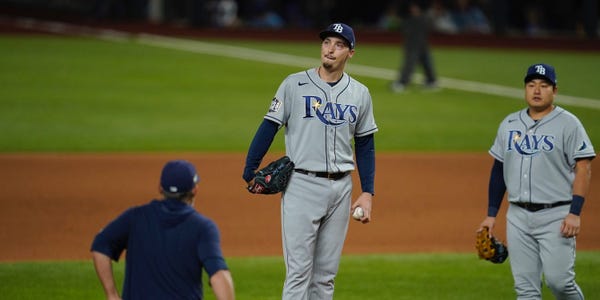 Tampa Bay Rays manager Kevin Cash's decision to pull Blake Snell in the sixth inning of Game 6 of the World Series immediately came back to bite his team.

The Los Angeles Dodgers won the World Series on Tuesday, beating the Rays 3-1. The turning point came in the bottom of the sixth inning, with the Rays winning 1-0. Cash pulled Snell after Snell gave up a single to Austin Barnes to begin the inning.

Snell to that point had been dominant, throwing five scoreless innings, giving up just two hits, and striking out nine. The Dodgers' trio of Mookie Betts, Corey Seager, and Cody Bellinger were 0-6 on the evening.

Many in the baseball world reacted in shock at Cash's decision.

Snell reacted angrily when he was pulled.

The timing of the move was even more confounding, as Betts had struggled against lefties this season.

The switch to reliever Nick Anderson did not go well. Betts immediately doubled to left, bringing Barnes to third. Barnes then scored on a wild pitch to tie the game.

Two pitches later, Seager hit a ground ball to first, and Betts scored, beating the throw to home. The Dodgers took a 2-1 lead.

Anderson was then pulled for Aaron Loup, who ended the inning.

The damage had been done, however. While Snell remained stoic in the dugout, the decision loomed large over the rest of the game. The Rays offense never got untracked, thanks to a dominant 2.1 innings from Julio Urias.

Betts seemed to stick the dagger in the bottom of the eighth with a solo home run to make it 3-1.

Snell didn't go past the sixth inning in a game all season, according to USA Today's Bob Nightengale. Snell had struggled in the sixth inning this season, and in Game 2, he was pulled after giving up two runs.

Nonetheless, Cash's decision reignited the debate over analytics in baseball vs. managing off of feeling. The move gave the Dodgers life, as Betts said after the game.

"They made a pitching change, and that's all we needed."