Here, then, is the home straight of the Premier League season, the final quarter of a campaign that was heralded as the most chaotic, and least predictable, of them all.

At times, throughout autumn and into winter, the combination of empty stadiums, a packed schedule and a frantic pace seemed destined to usurp the established order. Contenders seemed to rise and fall every week. Earnest conversations were held about whether Aston Villa could win the league or if Arsenal was in danger of relegation.

It did not, it turns out, quite come to pass. It soon became clear that Manchester City — the team with the best and biggest squad, the side with the brightest coach — would be champion while spring was still fresh in the air. Pep Guardiola’s team sits 14 points clear of Manchester United, its fingers already brushing a third crown in four years.

Relegation, too, is largely settled. Sheffield United and West Bromwich Albion will be playing in the Championship next season; all that remains to be decided is whether Fulham can muster enough momentum to condemn Newcastle, drifting and directionless, to a place alongside them.

In that relative certainty, the Premier League is something of an outlier across Europe’s major leagues. Elsewhere, the curious circumstances of the pandemic season do seem to have had an effect. In Spain, Barcelona and Real Madrid are slowly reeling in a stuttering Atlético Madrid. In Italy, Inter Milan has six points on its city rival, A.C. Milan, and 10 on Juventus and Atalanta. But with at least one fairly spectacular choke in fans’ relatively recent memory, that is not yet a gap broad enough to permit any comfort.

In Germany, the title race may effectively be decided this weekend, when Bayern Munich travels to RB Leipzig on Saturday knowing that victory will all but see off its last remaining challenger. A couple hours earlier, the top two teams in France will meet, though neither Lille nor Paris St.-Germain is in a position to deliver a decisive blow. Lyon and a resurgent Monaco are within touching distance of both, four teams separated by four points.

In the absence of questions at the top and bottom of the table, the Premier League has concentrated all of its drama, jeopardy and intrigue into the jostling for position immediately below Manchester City. There are three more spots available in the Champions League for next season and seven teams with a realistic shot at one of them.

Some are fallen giants, teams desperate to salvage something from a bitterly disappointing season. Others are surprise packages, those teams that have best adapted to the strangeness of this season. It is at this point that the consequences of all the chaos and unpredictability of the last seven months are made flesh, and it is a race that is all but impossible to sort — at least not yet. “It will go until the last day,” Carlo Ancelotti, the Everton manager, said last month. The challenge, he said, is to make sure you are still in contention by then. 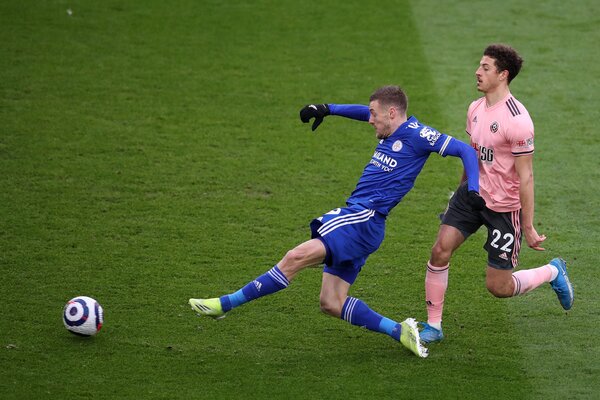 A glance at the table would indicate that two of the seven Champions League contenders — Manchester United and Leicester City — have a considerable advantage. Ole Gunnar Solskjaer’s United has an eight-point lead on West Ham, currently the first team outside the places in fifth. Brendan Rodgers’s Leicester side has a seven-point cushion.

But in Leicester’s case, certainly, that head start could yet be canceled out by the fact that its remaining schedule is considerably steeper than some of its rivals’. Leicester faces Manchester City this weekend before traveling to West Ham. Three of its final four games are against direct rivals for a spot in the top four: trips to Manchester United and Chelsea, and a home game against Tottenham. Rodgers’s team surrendered a place in the top four on the final day last season; this year’s calendar brings with it the ghost of past regrets.

No other team has quite such an arduous finish to the campaign, though Chelsea is close. The extent of Thomas Tuchel’s impact at Stamford Bridge will be gauged by visits to West Ham and Manchester City, and looming home games against Arsenal and Leicester.

If the calendar is kindest to anyone, it is Liverpool, marooned in seventh after a dismal run since late December. That may prove scant solace for a team that has spent the last three months losing at home to Fulham, Brighton and Burnley, but it at least gives Jürgen Klopp’s side a slim chance of returning to Europe.

The Price of Distractions

If anything has marked this season, it is the capriciousness of crisis. It is barely two weeks since José Mourinho accused his Tottenham players of being unable to display “the basics of football and the basics of life” during a humiliation at the hands of Dinamo Zagreb in the Europa League. Now he may wonder if being out of that competition is not such a bad thing.

Nine league games remain of Spurs’ season, and Mourinho must also make room for the Carabao Cup final on April 24. But, that aside, he has a clear run. So, too, do West Ham and Everton. Leicester has one extra game than its rivals — an F.A. Cup semifinal — but the rest have more demanding commitments to juggle.

Chelsea, for one, is still fighting on three fronts: An F.A. Cup semifinal against Manchester City beckons, as well as a two-legged Champions League quarterfinal with F.C. Porto. Should Chelsea reach the final of both competitions, it would have to play almost twice as many games as some of its rivals.

Liverpool has a Champions League quarterfinal, too — a more arduous pairing, against Real Madrid — and Manchester United will be expected to reach the final of the Europa League, adding another five games to its schedule. At the end of a season that has been particularly demanding, the strain of any added workload to tired legs may prove crucial.

That injury has proved a defining factor in the outcome of this Premier League season is neither surprising nor particularly debatable. The root of Liverpool’s collapse lies in its loss of its central defense; Leicester’s form stuttered with the absence, at various times, of Jamie Vardy, James Maddison and Harvey Barnes, among others; Everton’s results dipped when James Rodríguez was missing.

It would be reasonable, then, to assume that the next two months will be decided by which teams sustain the fewest injuries, particularly to their key players. Liverpool, of course, is still missing Virgil van Dijk, Joe Gomez and Joel Matip. Tottenham is without Son Heung-min. Leicester is without Barnes, Maddison and James Justin, while Manchester United is sweating on Marcus Rashford, Mason Greenwood and Anthony Martial.

Injuries can, of course, be sheer misfortune — a bad tackle, a mistimed movement — but they can also be cumulative, the effect of a player pushed too far into what Arsène Wenger used to call the “red zone.” But that is not the only consequence of fatigue. Even if injury is avoided, performance can dip.

It is this, more than anything, that should give Solskjaer and Manchester United pause. United’s captain, Harry Maguire, has played 3,946 minutes this season, an order of magnitude greater than every other outfield player in England. He has played the equivalent of five full games more this season than his nearest rival, Leicester’s Youri Tielemans.

But Maguire is not alone. United has seven players who have played more than 2,700 minutes this season. Leicester and Everton have only one, Chelsea two, and Spurs and West Ham three. Even Liverpool, its options reduced because of all those injuries, has only five. If fatigue does prove to be a factor, the core of United’s side is more likely to be afflicted in the final stretch than anyone else.

To some extent, of course, that is offset by its resources: Solskjaer has options should any of his key players be sidelined or suffer an alarming drop in form. Having to play Donny van de Beek because Bruno Fernandes needs a rest should be no great sacrifice.

Indeed, that may well be the formula, more than any other, that comes to define the next two months, that serves to find the signal in the noise of this season. More than in any other season, the final prize on offer in the Premier League will go to the teams that can best minimize the effects of fatigue, thanks to a reduced workload or by possessing the strength in depth to ride it out. In all the chaos, in the end, there will be some sort of order.

04/01/2021 Sport Comments Off on The Title Race Is Over. The Fight for the Top Four Starts Now.
Recent Posts