Twenty minutes before Gerrit Cole threw the first pitch of the 2021 Major League Baseball season on Thursday, his teammate, D.J. LeMahieu, emerged from the Yankees’ dugout and jogged to the outfield to stretch. He was met with something absent from Yankee Stadium since October 2019: applause and cheers from fans.

For the first time in what has felt like forever for many, baseball was back in New York in a fashion that resembled normality. Amid the coronavirus pandemic, the Yankees performed for a television-only audience last year. Now in what is hoped to be the downslope of the pandemic, Yankees fans were allowed to return to see their World Series hopeful team in person.

In front of a crowd of 10,850 fans, the Yankees fell to the Toronto Blue Jays, 3-2, in 10 innings. Nick Nelson, the Yankees relief pitcher, surrendered the go-ahead run on a double to Randal Grichuk. But there is less reason for Yankees fans to worry about any individual loss this season: M.L.B. teams are scheduled to play their traditional 162-game regular season unlike the pandemic-shortened, 60-game season last year.

“It wasn’t the result we wanted, but having that buzz, having that energy back in the stadium was something special that we all enjoyed,” Yankees right fielder Aaron Judge said. “I was talking with the guys and a couple umpires. Everybody missed it.” 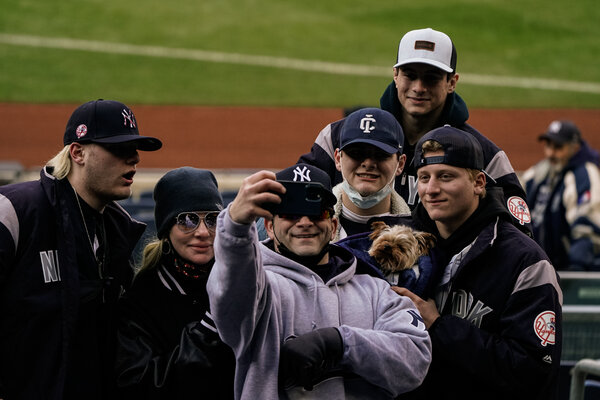 While the Blue Jays are expected to present a formidable challenge this season, the Yankees are widely considered the best team in the American League East and one of the favorites to win the World Series. Armed with one of the most powerful lineups in baseball and a deeper starting rotation than before, the Yankees hope to end a championship drought that enters its 12th season despite their prodigious talent and spending.

“The expectations with the Yankees never really change every year,” said Yankees outfielder Brett Gardner, the only player from the 2009 World Series-winning team on the current roster. “We’ve got our eyes set on the ultimate prize and obviously it’s been way too long since we’ve been back to the World Series.”

With a similar cast of characters to this year’s team, the Yankees struggled with injuries and inconsistency last season. They went 33-27 and failed to repeat as American League East champions, finishing second to the Tampa Bay Rays. Their season ended in familiar fashion, with a loss to the Rays in second round of the playoffs. After each early postseason exit, Judge has called the year a failure, a shortcoming he has said he thinks about every day.

This season and next are critical for the current group of Yankees. Several key players — Judge, catcher Gary Sanchez, pitcher Aroldis Chapman and others — are eligible for free agency after the 2022 season.

“A lot of our outstanding core players are really smack dab in the middle of the prime of their careers so we understand the urgency, the importance of playing well, and that all feeds into the hunger that exists with this team,” Yankees Manager Aaron Boone said recently. “They’ve tasted a lot of success but have also come up short a lot.”

To get over the hump and improve their roster, the Yankees’ most significant additions over the winter were adding high-risk, high-reward starting pitchers Corey Kluber and Jameson Taillon, who combined to throw one inning last season because of injuries.

Still, the Yankees’ pitching staff has fewer holes than the Blue Jays’ on paper. But on Thursday, the Yankees’ lineup couldn’t solve a Blue Jays’ bullpen that was without closer Kirby Yates, who will miss the entire season because of elbow surgery.

Hoping to bounce back from an awful 2020 season, Sanchez smashed his first career opening-day home run, a two-run blast off Blue Jays starter Hyun-jin Ryu that gave the Yankees a 2-1 lead in the second inning. But Cole, with his family from California in the stands, coughed up a game-tying home run to Teoscar Hernandez in the sixth on a hanging slider over the heart of the plate.

“I just want that slider back,” Cole said.

The Yankees’ lineup threatened throughout the game but couldn’t capitalize. In the 10th inning, the Blue Jays broke through. To cut down on the length of games during the pandemic, M.L.B. and the players’ union implemented rules in which extra innings begin with a runner on second base. On the second pitch he saw, Grichuk doubled home Jonathan Davis, while the Yankees struck out three times to end the game.

Despite the loss, Cole said he was happy this season began on time and with fans in the stands. Earlier in the week, Cole said playing with artificial crowd noise and fan-less stadiums last year was surreal.

“It was something that you didn’t really realize would have as much of an impact as it did,” he said. “We’re more grateful to be able to share this experience with the fans going forward. It’s something that I’ll always remember. And every time I see a fan or sign an autograph for a kid, I’ll remember that at one point this was taken away from us.”

Fans, though, were perhaps too eager to see Judge again. After he caught a ball at the wall in foul territory to end the top of the ninth inning, a fan tried to reach into Judge’s glove.

“It’s their first time back at a stadium in a long time,” Judge said. “I’ll give them that one.”

Others were simply happy to back in familiar surroundings. In Section 224, Michael Mayer, a North Jersey native wearing a Derek Jeter jersey, sat with his girlfriend, Lia Bella. Since he was a child, Mayer came to opening day every year with his father. But last year was the first season opener he said he hadn’t attended since 1985.

So when New York state announced that the Yankees could host fans at a limited capacity to start the season, Mayer, 40, and Bella, 35, vowed to be in the stands. During Thursday’s game, Mayer smiled as he held a sign that Bella made. It read: “Just happy to be here.”