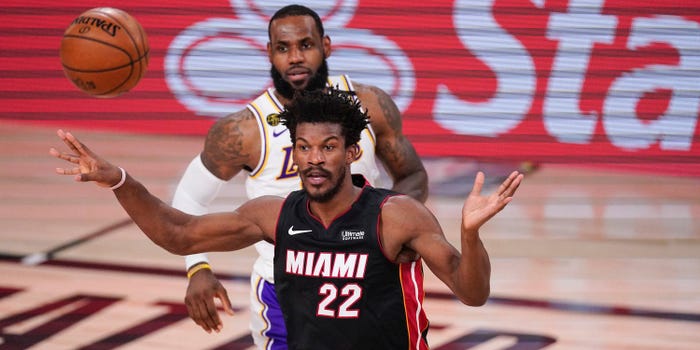 The National Basketball Players Association plans to vote this week on whether to start the next NBA season on December 22, as the league is pushing for, according to The Athletic's Shams Charania.

A start date of January 18 is also a possibility, but according to Charania, many players feel a December 22 start is inevitable.

There has been some pushback on a December 22 start. The 2019-20 season concluded on October 11 in the Disney World bubble. It would be a remarkably short offseason for teams like the Los Angeles Lakers and Miami Heat, who spent three months in the bubble, and for teams that went deep into the playoffs like the Denver Nuggets and Boston Celtics.

It would also compress the offseason into a matter of weeks, with the NBA draft held on November 18, free agency shortly after, and training camps on December 1.

However, the NBA has said there may be $500 million or more in revenue tied to a December start. It would also allow the season to wrap in time for the 2021 Olympics, and get the league closer to its traditional October-June schedule, two aspects that become more difficult with a January start.

If the players do ultimately decide to begin next season on December 22, there is a simple way to appease the teams who need more of an offseason: stagger the schedule.

Stagger the schedule to give playoff teams more time off

The Athletic's Ethan Strauss (and perhaps others) suggested bringing back these 22 teams that have been without basketball the longest.

The eight teams that were left in the bubble after the first round — the Lakers, Heat, Celtics, Nuggets, Toronto Raptors, Milwaukee Bucks, Houston Rockets, and LA Clippers — could begin later. Call them the "Elite 8."

The first 22 teams could begin training camps on December 1, go through preseason, and tip-off on December 22.

A big part of the December start includes keeping the NBA's slate of Christmas day games. Though it would lack the punch of the reining champion Lakers, Heat, Clippers, or Giannis Antetokounmpo and the Bucks, the NBA could still easily conjure up enough star power with the following teams:

There is national interest in teams like the New York Knicks, Chicago Bulls, and San Antonio Spurs in this group, and solid playoff teams with All-Star players in the Utah Jazz and Indiana Pacers as well. It may even benefit smaller-market teams to get more exposure earlier in the year.

These 22 teams could carry the spotlight until:

The Elite 8 teams could begin training camps on December 10, ten days after the first 22 teams. In turn, their regular season could begin ten days after December 22. Their seasons would tip over New Years Weekend, and as Strauss noted, the delay to see teams like the Lakers and Heat may build some anticipation in audiences. The New Years debuts would serve as an additional national spotlight for the NBA, particularly if those eight teams played each other.

An extra 10 days isn't a ton of time, but it would be almost two months to the day of the end of the bubble. A delayed tip for these eight teams might allow them to ramp-up more slowly in training camp, easing their players back into action after a shorter offseason.

In turn, the 22 teams that begin first could see their schedules spread out more as the season goes on, a benefit of starting earlier.

The NBA will have much bigger issues to tackle this season, from the finances of playing without fans, to playing without a bubble while the coronavirus pandemic surges across the U.S.

But staggering the schedule is at least a compromise to the teams who played deep into the playoffs in the bubble. It may even come with some creative solutions that benefit the other 22 teams.

11/06/2020 Sport Comments Off on There is a simple solution to appeasing the NBA playoff teams that are reluctant to start the next season in December
Recent Posts
We and our partners use cookies on this site to improve our service, perform analytics, personalize advertising, measure advertising performance, and remember website preferences.Ok