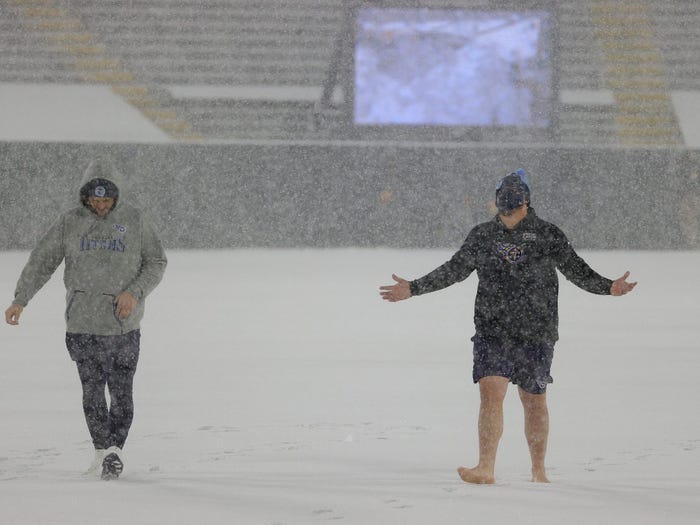 A little snow isn't getting in Ben Jones' way.

Before every game of his NFL career, the Tennessee Titans offensive lineman has walked the field barefoot in honor of his brother, Clay. This week was no exception, though undoubtedly a little different than most of Jones' past pre-game promenades.

The 6-foot-3, 308-pound starting center strolled a snow-covered Lambeau Field sans shoes prior to Sunday's game against the Green Bay Packers. And despite the frigid conditions, Jones appeared jubilant while trudging through a few inches of snow that had accumulated on the ground.

Jones has kept up with the tradition ever since his sophomore year of high school, when he was playing alongside his brother, a quarterback, at Bibb County High School in Centreville, Alabama. Clay woke him up from a nap to walk the field before a big game, and when Ben said he'd go grab his shoes, his brother insisted that "We ain't got time for that."

Jones decided to stick with the pregame ritual after the first shoeless sashay resulted in a huge win for the Choctaws.

He continued the tradition into his college years with the Georgia Bulldogs and then into his NFL career, first with the Houston Texans and now with the Titans. And even though playing in Athens, Houston, and Nashville has generally brought Jones favorable conditions for his sockless saunters, he has occasionally tiptoed through inclement weather in the past.

Prior to playing a game in Cleveland back in 2014, Jones said he was tempted to put shoes on because there was snow on the ground. And when he was in Chicago his rookie year, he said it was "35 and raining" which was "pretty bad."

"But after that, it's just like being in the cold tub," Jones told ESPN. "Your feet go numb after about two or three minutes anyway."

Jones and the Titans will travel to Houston to face the Texans for their sole regular-season game remaining this season. But Tennessee is more than likely headed to the playoffs, so Jones could very well be in for more icy ambles as the Titans move into the postseason.

12/28/2020 Sport Comments Off on Titans lineman Ben Jones walked barefoot across a snow-covered Lambeau Field to continue a tradition started with his brother
Recent Posts
We and our partners use cookies on this site to improve our service, perform analytics, personalize advertising, measure advertising performance, and remember website preferences.Ok