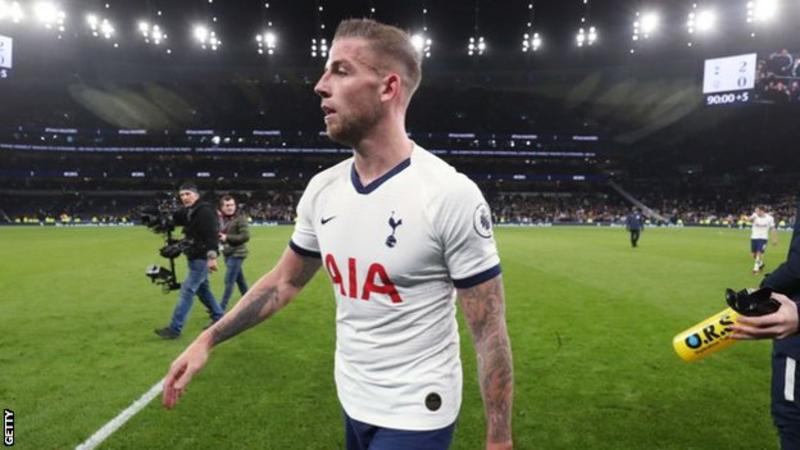 Tottenham defender Toby Alderweireld is trying “to bring a little bit of joy” to those with coronavirus by donating tablets to hospitals and nursing homes.

The Belgium international has already paid for dozens of devices and has more on the way for those who are isolated.

“We are already getting messages from people who can now speak to their families and it has been a real help,” he told 5 Live’s Euro Leagues show.

“I didn’t do it for a reaction, just to help but it has been so positive.”

Alderweireld was moved to try to help those suffering with the virus and hopes his donation has made a difference.

“In the UK we are a little bit behind Europe, I was getting news from across Europe so I was in a coronavirus state of mind,” he said.

“I called my dad and said we have to do something, we have to try to help.

“We were brainstorming, my dad contacted some hospitals and they said we need some tablets for people who are isolated, especially older people who don’t have a phone. It keeps a visual connection with loved ones, which was impossible otherwise.

“It makes me very happy and makes me sad that I can’t help everyone but I am trying the best I can. If it can bring just a little bit of joy to their lives it is great.”

No decision has yet been taken on when the Premier League will return to action, and Alderweireld says all the players can do is to work to the date they have been given, with English football suspended until at least 30 April.

The centre-back has all the fitness equipment he needs to train at home and is trying to take some positives from the situation.

“It’s a strange feeling now – you want football back, you want everything to be normal again, but on the other hand I am at home and can spend a lot of time with my children,” he says.

“That’s a small positive. I am lucky to have them close to me. I have two little children so if I am not training I have my hands full.

“Football is very important, it’s much more than just a game but on the other hand the most important thing in life is family. Health and family should always be number one.

“I left home when I was 15, I gave everything for football but right now football has been put into context by what is going on.”

Tottenham have confirmed that forwards Son Heung-min and Steven Bergwijn have been allowed to return home during the enforced break.

Son, who is recovering from a broken arm, left London on Friday with his parents and will spend two weeks in isolation as per the South Korean government’s requirements after travelling from the UK.

Bergwijn has returned to the Netherlands before the birth of his first child.

Related posts:
03/29/2020 Sport Comments Off on Toby Alderweireld hopes for ‘joy’ after tablet donation to hospitals
Recent Posts
We and our partners use cookies on this site to improve our service, perform analytics, personalize advertising, measure advertising performance, and remember website preferences.Ok