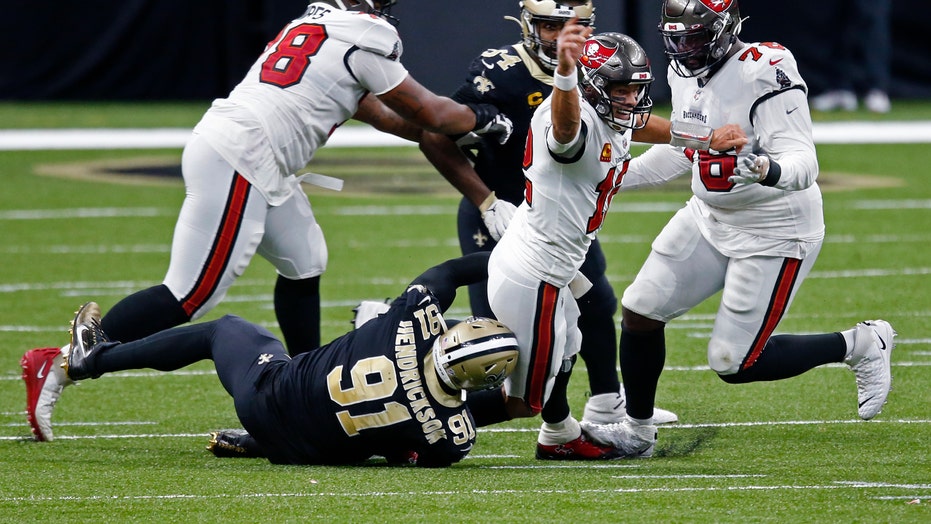 Tom Brady made his highly anticipated Tampa Bay Buccaneers debut on Sunday, but the New Orleans Saints played the role of spoiler.

The Saints intercepted the future Hall of Fame quarterback twice, one of which was returned for a touchdown by cornerback Janoris Jenkins, and New Orleans running back Alvin Kamara had 67 total yards and two touchdowns in a 34-23 Saints win over the Buccaneers.

Despite the losing effort, Brady and the Bucs actually got off to a fantastic start in the ball game.

The Buccaneers, who began their first drive of the game at their own 15-yard yard line, put together a nine-play, 85-yard drive in about 5 minutes, and it was capped when Brady plunged into the end zone from 2 yards out on his methodical, almost always successful quarterback keeper.

On that drive, Brady connected with wide receive Chris Godwin for a 29-yard pass play, and running back Ronald Jones had 12 rushing yards on five carries.

The Buccaneers were also aided on a 3rd-and-2 play from the Saints’ 38-yard line when Brady threw a beautiful touch-pass to Mike Evans, but Saints defensive back Marshon Lattimore committed defensive pass interference.

Brady was 15 of 28 passing for 157 yards and one touchdown through the first 54 minutes of the game. He added to his numbers in garbage time, finishing with 239 yards and two scores, the second scoring strike going to Evans with 2:41 left in the game.

Saints quarterback Drew Brees wasn’t at his best, but he was very efficient. He passed for 160 yards and two touchdowns, but he did not turn the ball over and took only one sack. His first touchdown pass came when he dumped it to Kamara from 12 yards out. And in the fourth quarter, he hit offseason acquisition Emmanuel Sanders for a 5-yard score.

Brady and the Buccaneers will look to rebound against the Carolina Panthers in Week 2. The Saints will travel to Las Vegas to take on the Raiders.