The deciding games of the monthlong European soccer championship have for years been planned for London, where Wembley Stadium is set to host both semifinals and the final of the quadrennial event next month.

Only weeks before the Euro 2020 final, though, organizers and the British government are discussing exemptions to pandemic travel restrictions that would allow thousands of overseas supporters — and as many as 2,500 V.I.P.s — to attend the games in London.

If an agreement, or a compromise, cannot be reached, UEFA, the governing body for European soccer that runs the championship, has not ruled out moving the final to another country.

“There is always a contingency plan but we are confident that the final week will be held in London,” UEFA said in a statement.

UEFA secured some exemptions to rules on travel and quarantines for visiting foreign nationals before the tournament, and both sides had thought the coronavirus infection rates that had prompted the restrictions would have fallen by the time the tournament’s deciding games were to be played at Wembley in early July. Instead, case numbers are surging in England, largely because of a new and aggressive variant of the virus, and that led Prime Minister Boris Johnson to postpone lifting the final restrictions on social distancing that had been planned for June 21.

That delay already means that any hopes of playing in front of capacity crowds at Wembley have been dashed; it has already been announced that the 90,000-seat stadium instead will operate at only half its capacity for the two semifinals and final. The stadium — one of 11 being used across Europe — is allowing only 22,500 fans for three group-stage games being played there.

British Prime Minister Boris Johnson held private talks this week about the matter with his UEFA counterpart, Aleksander Ceferin, according to a person with knowledge of the discussions. Privately, officials on both sides expressed confidence that a compromise can be found to keep the game in Britain, though news media reports have said that Budapest, the only host stadium operating at full capacity during the Euros, is being considered as a fallback option.

The current talks about looser rules are not the first wrangle this year between UEFA and the British authorities, though, over exemptions for a soccer event. In May, the soccer body and the British government failed to come to an agreement that would have allowed this season’s Champions League final, a game featuring two English teams — Manchester City and Chelsea — to be relocated to London from Istanbul. After trying and failing to reach a deal, UEFA took the final to Porto, Portugal.

There is a considerable amount at stake for both sides. For UEFA, London has become a popular and lucrative host for major finals. For the British government, which has recently waded into soccer debates in an effort to boost its popularity and credibility, keeping the games and preserving a valuable relationship with UEFA is seen as vital as Britain tries to forge a new identity after its acrimonious departure from the European Union. 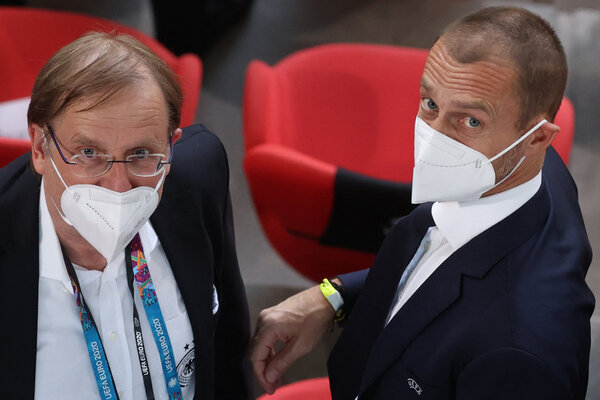 But Britain is also counting on UEFA’s support for a joint bid with Ireland to stage the 2030 World Cup. Without UEFA’s backing, that effort would be doomed. Johnson mentioned the World Cup bid on a phone call with Ceferin, according to a person on the call.

UEFA’s proposed solutions to the impasse on visitors have included fans entering the country “using a strict testing and bubble concept,” its statement said. Guests would be asked to restrict their movements to approved transportation and game venues, and to leave Britain within 24 hours.

“We understand the pressures that the government face and hope to be able to reach a satisfactory conclusion of our discussions on the matter,” the UEFA statement said.

The pandemic era has taught European soccer’s governing body how to become nimble, and how to relocate high-profile games on short notice. For the past two years, UEFA has shifted its marquee club championship, the Champions League final, because of pandemic-related complications in the original host city.

But anxiety has grown among UEFA officials since a fast-spreading variant of the virus cast doubt on the anticipated “unlocking” of Britain by June 21. Johnson confirmed a four-week delay to the plans last week, signaling to UEFA that it needed to secure new exemptions from its hosts or seek an alternative site.

Privately, UEFA officials believe they are unlikely to get clearance for the thousands of foreign supporters that they are seeking, but they are optimistic that as many as 2,500 dignitaries, including executives from sponsors and broadcasters that provide much of the tournament’s $2 billion in revenue, will be cleared to come. Waivers have already been provided for about 1,000 guests, but allowing more V.I.P.s — but not access for fans — is politically risky for both UEFA and Britain.

In his call with UEFA’s leaders, Johnson reminded the officials that London’s diverse population meant that any team that reached the final could count on vocal, locally based support.

For UEFA, having crowds at the stadiums is as much a symbolic imperative as it is a commercial one. Much of this season’s soccer was played against the backdrop of empty seats and closed arenas, and Euro 2020, as far as the organizers were concerned, had to be seen as a sign of a return to old times. Cities that could not guarantee that fans would be allowed to attend matches were dropped and replaced. The games they lost were relocated to cities with less stringent rules.

Games have now been played at all 11 venues, and attendances have ranged from as few as 10,000 to a nearly full house of 55,662 in Budapest for Hungary’s game against Portugal.