SAN DIEGO — This much is clear heading into the American League Division Series beginning Monday at Petco Park here: the Tampa Bay Rays and the Yankees are not fond of each other. The Yankees’ rivalry with the Rays, which for now has supplanted their more traditional one with the rebuilding Boston Red Sox, is littered with hit batters, close games, ejections, suspensions and testy words.

So it was a bit awkward when Yankees outfielder Brett Gardner, before a team workout on Saturday, ran into a few members of the Rays at the hotel both teams are staying at in Carlsbad, Calif., about 35 miles north. As part of Major League Baseball’s controlled environment for the postseason amid the coronavirus pandemic, both teams are in quarantine in separate sections of the same resort but can still stumble across each other in the lobby or certain outdoor areas.

Make no mistake: This matchup is one both sides have been dreaming about for some time. On Sept. 2, the Yankees fell to the Rays, 5-2, giving them a 2-8 regular-season record against Tampa Bay. The Yankees were also in the midst of their worst stretch of the season, dropping 15 of 20 games and losing their grip on the top spot in the A.L. East to the Rays.

“The hope is we’ll see those guys again in October,” Gardner said at the time.

So here they are, seeing each other again, in a best-of-five series with the winner earning the right to face either the Houston Astros or the Oakland Athletics in the A.L. Championship Series, also to be held in San Diego.

“We’re clearly the underdog now,” Yankees Manager Aaron Boone said the day after his fifth-seeded team dispatched the Cleveland Indians in the first round last week. “They’re the big, bad No. 1 seed of the A.L. East.”

Boone smirked as he said that, clearly a tongue-in-cheek comment coming from the manager of a franchise once nicknamed the Evil Empire because of its ruthlessly aggressive spending. The top-seeded Rays, on the other hand, are a smaller-market franchise known for its baseball ingenuity in spite of attendance woes and paltry payrolls. 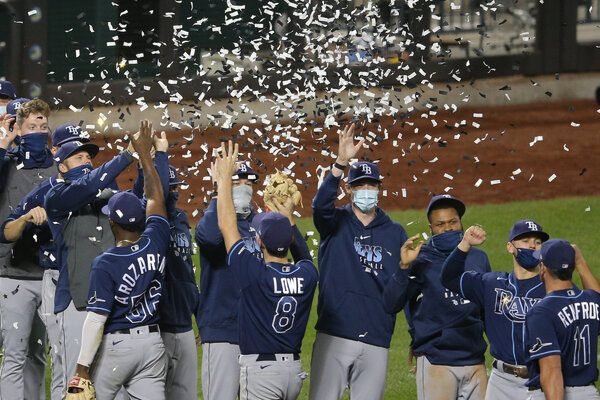 According to Spotrac, which included prorated salaries for the truncated 60-game regular season, the Yankees have a 2020 payroll of $109 million, highest in the major leagues, while the Rays rank 28th at $28 million. When the Yankees signed Gerrit Cole, who will start Game 1 of the A.L.D.S., to a nine-year, $324 million contract this off-season, they committed more to him than the Rays had to their whole payroll over the previous four seasons combined.

With an analytically driven front office and a strong track record of developing players, the Rays consistently squeeze more juice out of the lemon. Sure, they have three top-line starting pitchers — Blake Snell, the 2018 A.L. Cy Young Award Winner; Charlie Morton, a two-time All-Star; and Tyler Glasnow, whose fastball touches 100 miles per hour — but they also have a deep group of lesser-known relievers and hitters that their manager, Kevin Cash, uses interchangeably to exploit any matchup.

“Who would have thought we’d be facing Tampa Bay in San Diego when this year started?” said the Yankees’ designated hitter Giancarlo Stanton, adding later, “It’s going to be exciting to take this East Coast battle to the West Coast.”

The Rays took their first shot at the Yankees right after clinching the A.L. East crown, putting on hats that read “Tampa Bay 98ers” and T-shirts that pictured horses in a stable. Both were nods at a dust-up between the teams during their regular-season series in early September, when Yankees starter Masahiro Tanaka and closer Aroldis Chapman each plunked a Rays batter. That episode — the culmination of tension dating to as far as 2018 — led to both benches clearing after the game, several suspensions, and Cash saying that he had a “stable full of guys that throw 98 miles an hour.”

Last week, Stanton said, the Yankees had an opportunity to claim a much bigger prize than the division title they relinquished to the Rays. “The full bragging chance is here,” he said. “Shirts and hats don’t mean anything.”

Outfielder Kevin Kiermaier, the longest tenured Rays player, was particularly thrilled to see the Yankees again. While he said that none of what happened between the teams during the regular season mattered in October, they had still not forgotten it.

“I’ve said it many times: They don’t like us and we don’t like them, and it’s going to continue to stay that way,” he said.

Kiermaier said he knew “for a fact” that each team wanted to “put it to the opposition” — but he said that would most likely mean continued chirping between the dugouts rather than any altercations on the field. “We try to let our bats do the talking and the pitchers try to let their pitches, arsenal do the talking as well,” he said.

Asked about the Rays before Monday’s game, the Yankees were relatively subdued in their responses. They acknowledged the Rays’ talent and stressed the need to stay focused on the game, rather than the extracurriculars.

“That’s the entertainment business of it,” Stanton said. “At the end of the day, it’s a series like this that makes a statement, not anything else.”

For both teams, playing the A.L.D.S. without the traditional days off after Games 2 and 4 will present an unusual set of challenges.

The Rays play better defense and have a deeper pitching staff than the Yankees; the Rays were third in the majors during the regular season with a 3.56 earned run average. But the Yankees are healthier now than at any point during the year and are better at the plate than the Rays: They led the A.L. in scoring during the regular season and notched 22 runs against Cleveland, which had the league’s best pitching staff.

But before and after games, the teams will not be able to entirely avoid each other. At least the Rays have some experience with this: Even though they hosted the previous round of the playoffs at Tropicana Field, the Rays stayed at the same hotel as the Toronto Blue Jays in St. Petersburg, Fla., Cash said, in order to comply with M.L.B. rules attempting to create a controlled environment for the postseason.

The Rays and Blue Jays, though, don’t have the same level of dislike as the Rays and Yankees. Yankees reliever Zack Britton, at least, said he didn’t expect any hard feelings to carry over into the hotel.

“It’s all about the competition on the field,” he said, adding later, “If we see each other, I’m sure we’ll friendly nod and just go about our business.”

10/05/2020 Sport Comments Off on ‘We’ll See Those Guys Again’: The Yankees and Rays Wanted This Series
Recent Posts
We and our partners use cookies on this site to improve our service, perform analytics, personalize advertising, measure advertising performance, and remember website preferences.Ok