The last three games of the 2020-2021 women’s college basketball season will feature a few familiar teams, as well as one upset-ready newcomer.

The No. 1 seeds Stanford and South Carolina will repeat their Final Four meeting of 2017, with the Cardinal hoping for a different result and the Gamecocks aiming toward a second title in the past five years.

The No. 1 seed Connecticut, a fixture in the Final Four, will square off with the No. 3 seed Arizona, whose star, Aari McDonald, will try to surprise the Huskies, the owners of a record 11 national titles, and the new face of their program, Paige Bueckers.

Here are a few details to follow in the close matchups that start at 6pm EST:

How do you contain Bueckers and McDonald?

UConn’s Bueckers was voted the Associated Press Player of the Year, and Arizona’s McDonald is the Pac-12 Player of the Year. This game will challenge them to take over and will also test the supporting players on each team. Connecticut’s starters, most of whom have at least some previous tournament experience, will have an advantage in that regard.

“They’re a confident team because it’s charted territory. It’s uncharted for us. This is something they’re used to,” Arizona Coach Adia Barnes said. “But we’ve peaked at the right time, and to win a championship, you just have to beat that team one time.”

McDonald has played her best basketball of the season during the tournament, carrying the Wildcats past tough teams. She score more than 30 points in each of her past two tournament games while averaging nearly 60 percent shooting. She is fast and a skillful ballhandler with a craftiness that helps her find ways to score from anywhere on the court, around almost anyone assigned to defend her.

Bueckers has not exhibited newcomer jitters — she was the first freshman to win the top player award — as she played her signature smooth, somewhat unassuming game from the start of the tournament. Her preternatural court vision allows her to set up the other shooters on her team, including Christyn Williams and Evina Westbrook. They might be the ones with the gaudy stat lines on Friday night, if Arizona decides to focus its defense on shutting down Bueckers.

Who will have quicker hands, the Huskies or the Wildcats?

The Connecticut and Arizona defenses are two of the best in the nation at disrupting possessions and nabbing the ball. The Huskies get steals on 12 percent of their opponents’ plays, and the Wildcats create takeaways on 13 percent.

Arizona also pressures teams into turning over the ball on more than one-fifth of their possessions, according to Her Hoop Stats. In the round of 16, Arizona stifled Texas A&M by playing a full-court press over and over, leaving the Aggies so uncertain that they turned the ball over 19 times. 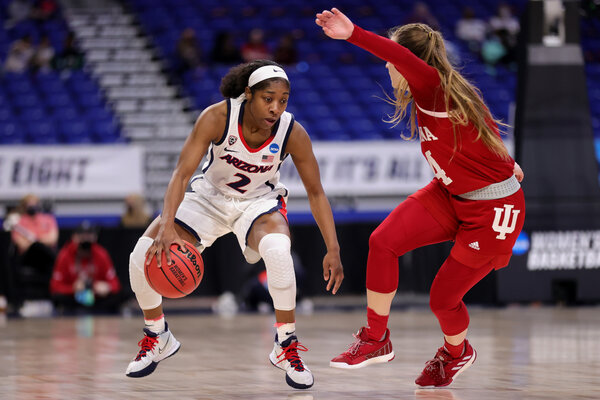 McDonald’s handsy play and 2.7 steals per game earned her a share of the Pac-12 Defensive Player of the Year honors, but forward Sam Thomas is right behind her with an average of 2.4 takeaways. The Wildcats’ approach is to agitate, not dominate, their opponents. They will need to be as obnoxious as possible against UConn’s streamlined offense, which has been one of the highest scoring in the nation.

UConn’s defense will probably focus on McDonald, since containing her is the key to stopping Arizona. The problem is that few people have managed to do it this season, because to lower her shooting percentage you have to keep up with her first.

Who will prevail in a battle of the bigs?

South Carolina and Stanford have talented young post players with very different skill sets. Aliyah Boston, the Gamecocks’ 6-foot-5 sophomore, is listed as a forward but plays more like a traditional center, dominant around the basket and on the glass, with the size and strength — as well as the deft footwork — to overpower opponents. The fact that she averages a double-double is almost a footnote to the ways in which she broadly shapes South Carolina’s game.

“When she’s on the floor, you’ve got to guard her with a player and probably a half a player,” South Carolina Coach Dawn Staley said. “So she afforded us opportunities.”

Stanford’s Cameron Brink, a 6-foot-4 freshman, doesn’t have the same ability to muscle her fellow post players, but she can score quickly in transition and — occasionally — shoot from behind the arc. Brink has already helped the Cardinal with her volleyball-trained vertical leap, which allows her to block and rebound with ease. She is not yet dominant enough to attract double teams in the way that Boston tends to, but her range on the floor allows her to spread defenses and open up lanes for the Cardinal’s smaller guards, like senior Kiana Williams.

The Boston-Brink face-off calls to mind considerations at other levels of basketball, where coaches mull whether a traditional big should serve as an offense’s centerpiece or if flexibility at the position is more important.

The Cardinal looked as if they might be upset through much of their round-of-8 matchup against the No. 2 seed Louisville, and they betrayed one of the few weaknesses in an offense with a lot of powerful scorers.

The Cardinal hit one 3-pointer in the first half against Louisville, and went into halftime down by 12 points. Stanford hit six in the second half — still low, compared with the 14 3-pointers per game it averaged in the first three games of the tournament, but enough to push through to the next level.

South Carolina doesn’t shoot much from behind the 3-point line, but it does defend well against long-distance shots, allowing opponents to hit just 27 percent of their 3s.

The challenge with Stanford is that most of its players can hit a 3 when needed. But if South Carolina can force those shooters to the rim, where they will be greeted by Boston and her prodigious blocking skills, the Gamecocks will have a very real chance of quieting one of the most prolific offenses in the tournament so far.