The 2021 N.C.A.A. men’s basketball tournament tipped off Thursday with the play-in games from Indiana. They included a late-night matchup of the blue bloods U.C.L.A. and Michigan State, winners of a combined 13 national championships, but the action tips off in earnest on Friday.

Beginning at 12:15 p.m. Eastern time, eight games will take place Friday afternoon, followed by eight more in the evening. All the games are being played in Indiana because of the pandemic. Sixteen more games will be played Saturday. Four national television networks — TBS, CBS, TNT and TruTV — will carry the action.

The second-round games this year will occur on Sunday and Monday (feel free to call in sick on Monday), and by Monday night, the round of 16 will be set.

Here’s what to watch for in the first weekend of the tournament.

Gonzaga begins its quest for history.

The Bulldogs are the top overall seed and enter the tournament at 26-0. They are the first team since Kentucky in 2015 to come into the tournament unbeaten. Kentucky, which featured nine future N.B.A. players, rolled to 38-0 that season before losing in the national semifinals to Wisconsin at Lucas Oil Stadium in Indianapolis.

Before that, Jerry Tarkanian’s Nevada-Las Vegas Runnin’ Rebels were the last unbeaten team to reach the Final Four in 1991 before falling to Christian Laettner, Bobby Hurley and Duke in the national semifinals at the RCA Dome in Indianapolis.

To become the first undefeated champion since Indiana in 1976, the Bulldogs must reel off six wins in the next three weeks — also in Indianapolis — beginning Saturday night against Norfolk State, which beat Appalachian State, 54-53, Thursday.

If Gonzaga can win six straight, it will be 32-0 — just like Bob Knight’s Indiana team.

“Heck yeah, we want to win a national championship,” Few said Sunday on ESPN. “But every darn game, we have to be ready to go, and we have to play really, really well, including this first one.”

Virginia, the 2019 title winner, is technically the defending champion, since the tournament was canceled last year. But the Cavaliers had to withdraw from a semifinal game in last week’s Atlantic Coast Conference tournament after a positive test, subsequent quarantines and contact tracing within the program.

Coach Tony Bennett said most of the team, seeded No. 4 in the West Region, spent the week in quarantine in Charlottesville, Va. The Cavaliers are expected to arrive in Indianapolis Friday ahead of Saturday night’s game against No. 13 Ohio. They will have to jam in a lot during practice on Friday to prepare for their first game in nine days.

“I’m just really hopeful that we’ll be able to play this weekend,” the redshirt senior forward Sam Hauser said. “Quarantine is not that fun, but we’re allowed to at least go and walk around, get some fresh air, so just trying to keep a basketball in your hand as much as possible.”

Ohio features Jason Preston, a 6-foot-4 junior point guard who is averaging 16.6 points, 7.2 assists and 6.8 rebounds and has been called “the LaMelo Ball of college hoops” by ESPN’s Jay Bilas. Both Bilas and former President Barack Obama are picking Ohio to upset Virginia. 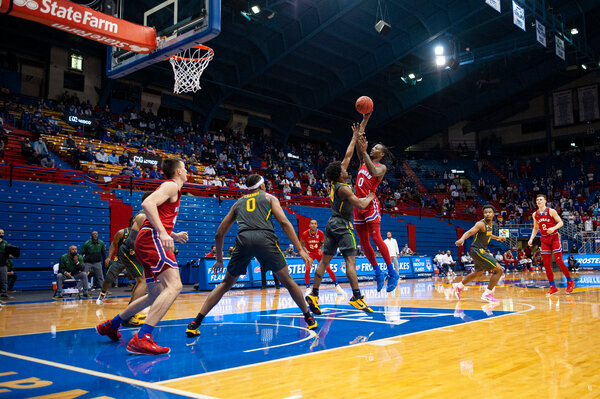 Kansas, the No. 3 seed in the West region, will also be playing its first game in nine days on Saturday — against No. 14 Eastern Washington — after withdrawing from the Big 12 tournament. The junior big man David McCormack is expected to practice in Indianapolis on Friday after having been in virus protocols. Coach Bill Self said the sophomore guard Tristan Enaruna would miss at least the first two games following a positive coronavirus test on Sunday “after numerous negative tests in a row.” The freshman forward Jalen Wilson, averaging 12.1 points and 8.2 rebounds, will miss at least the first game after testing positive last Friday.

Wilson’s former high school teammate, De’Vion Harmon of Oklahoma, will also miss his team’s first game with Missouri after testing positive. Harmon is the Sooners’ second-leading scorer, with 12.9 points per game. Kansas beat Oklahoma last Thursday in the Big 12 tournament before Kansas pulled out because of Wilson’s positive test.

“I think it will be an adjustment, but not as much as what a lot of people think,” Self said. “We may not play well, but it won’t be because, I don’t believe, that we’ve been thrown a curveball that we can’t hit.”

Georgia Tech, the A.C.C. tournament champion and the No. 9 seed in the Midwest region, was dealt a huge blow. Moses Wright, who won the A.C.C. Player of the Year Award, will miss at least the first game against No. 8 Loyola Chicago on Friday because of Covid-related issues, according to multiple reports.

Wright, a 6-foot-9 forward, is averaging 17.4 points, 8 rebounds, 2.3 assists and 1.6 blocks per game. Coach Josh Pastner will now have to use a smaller lineup against Loyola, which features the 6-foot-9 Cameron Krutwig, the Missouri Valley Conference player of the year, who averages 15 points and 6.7 rebounds.

Some key players will return. Others remain out.

Connecticut could have the redshirt junior point guard R.J. Cole ready for Saturday’s game against Maryland. UConn said Thursday that Cole was in the final stage of the concussion protocol, which includes full-contact practice. Cole, averaging 12.3 points, 4.4 assists and 2.9 rebounds per game, hit his head on the floor with less than five minutes remaining against Creighton in the Big East tournament semifinals and was bleeding on the court.

Drake’s leading scorer, ShanQuan Hemphill, returned for the team’s play-in game on Thursday, a 53-52 victory over Wichita State, after he broke his foot in a game last month. He averages 14.1 points and 6.3 rebounds per game and helped the Bulldogs start the season 18-0.

The Michigan star Isaiah Livers (stress fracture in his right foot) remains out indefinitely, which could affect the No. 1-seeded Wolverines. Alabama guard Josh Primo (sprained knee ligament) is listed as day to day. He averages 8.1 points and 3.4 rebounds per game for the Crimson Tide, the Southeastern Conference regular-season and tournament champions.

Tennessee forward John Fulkerson remains listed as day to day after having a surgical procedure on his face as a result of being elbowed by Florida’s Omar Payne during the SEC tournament. Fulkerson averages 9.5 points and 5.5 rebounds a game.

Hall of Famers will roam the sidelines.

Five of the seven active Division I men’s basketball coaches in the Naismith Hall of Fame are involved in the N.C.A.A. tournament. Michigan State’s Tom Izzo kicked things off against U.C.L.A. on Thursday night, losing 86-80 in overtime. Kansas’ Self, Iona’s Rick Pitino, Syracuse’s Jim Boeheim and North Carolina’s Roy Williams are also back in the tournament.

Neither Duke’s Mike Krzyzewski nor Kentucky’s John Calipari got a bid, the first time since 1976 that both programs are out of the tournament.

Villanova’s Jay Wright, a finalist for the Hall of Fame this year, is back in the tournament after winning two of the last four N.C.A.A. titles. Among active coaches, only Krzyzewski (five) and Williams (three) have more titles than Wright.

03/19/2021 Sport Comments Off on What to Watch in the First Weekend of the Men’s N.C.A.A. Tournament
Recent Posts