Backup quarterbacks securing big wins. An overtime thriller in Baltimore. And the end of a ridiculously promising rookie season for Cincinnati’s Joe Burrow. Sunday was a reminder of how unpredictable the N.F.L. can be, as well as how cruel it can be.

Here’s what we learned:

Thanks for all the love. Can’t get rid of me that easy. See ya next year✊

The N.F.L. can break your heart. Joe Burrow, Cincinnati’s rookie quarterback, had largely lived up to his hype, regardless of the Bengals’ poor record. But his season came to an end after he was sandwiched between a pair of Washington defenders in the third quarter and crumpled to the ground with an injury to his left knee. The play looked devastating in the moment and was confirmed to be just that when Burrow tweeted — before the game had even finished — that he would see everyone next year. Coach Zac Taylor said he did not have anything to add to Burrow’s injury reporting.

After the Bengals’ 20-9 loss to Washington — the first win for quarterback Alex Smith in more than two years following his own devastating leg injury in 2018 — Burrow has a 2-7-1 record for the season. But Burrow, the No. 1 overall pick in this year’s draft out of Louisiana State, threw for 2,688 yards, trailing only Andrew Luck, Patrick Mahomes and Cam Newton for the most in a quarterback’s first 10 starts. 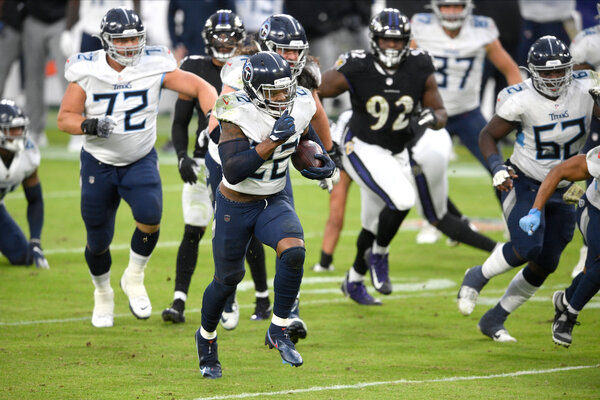 There is no quit in the Titans. With Tennessee trailing by 21-16 late in the fourth quarter, Ryan Tannehill threw to A.J. Brown at Baltimore’s 9-yard line. Brown was immediately hit and spun around by one defender and another grabbed Brown from behind before he broke free toward the goal line. Linebacker Patrick Queen appeared to have Brown stopped by getting in front of him just inside the 5-yard line, but Brown, with some help from running back Jeremy McNichols, simply pushed Queen backward into the end zone for a go-ahead score. Baltimore forced overtime with a field goal, but in the extra period Tennessee continued to churn forward relentlessly, with running back Derrick Henry ending the game by blasting through a crowded line of scrimmage before racing for a 29-yard touchdown run. With the 30-24 win, the Titans improved to 7-3, while the scuffling Ravens dropped to 6-4, having lost three of their four games since their bye week.

Baltimore’s Lamar Jackson summed things up succinctly: “It looked like that team wanted it more than us.”

Experience can be overrated. The extremely versatile Taysom Hill came into the day with more career tackles (13) than completions (10). P.J. Walker was mostly known for being the leading passer in the XFL when that league was shuttered by the pandemic. But because of injuries, both were pressed into action as starting quarterbacks, and both got the job done — even if it wasn’t always pretty.

Hill started for New Orleans in place of the injured Drew Brees — forcing the team’s primary backup, Jameis Winston, to the bench — and rose to the challenge. He passed for 233 yards, ran for 51 and scored two touchdowns in a 24-9 win over Atlanta, with the only blemish being a lost fumble at the end of a long run. Walker, subbing in for the injured Teddy Bridgewater, kept Carolina’s offense moving just fine in a 20-0 blowout of Detroit, doing enough damage that his two red zone interceptions could be forgiven.

Experience can also be rather important. Starting an unknown commodity at quarterback against Atlanta or Detroit may work but when doing so against undefeated Pittsburgh, things can get ugly — really ugly. Jake Luton, rookie for Jacksonville drafted in the sixth round this year, made his third career start in place of the injured Gardner Minshew and he turned in one of the worst games you’ll see. Even after completing four meaningless passes in a row while turning the ball over on downs toward the end of the game, Luton still completed just 16 of 37 passes for 151 yards. He didn’t throw a touchdown and was intercepted four times. Only 19 quarterbacks since the A.F.L.-N.F.L. merger have produced a lower passer rating on 35 or more attempts than Luton’s mark of 15.5.

Pittsburgh, meanwhile, became the N.F.L.’s first 10-0 team since 2015. The Steelers will try to get to 11-0 when they host the struggling Baltimore Ravens on Thursday.

The Texans can beat a team that isn’t the Jaguars. Coming into the day, Houston was 2-0 against Jacksonville and 0-7 against everyone else. But Romeo Crennel, the Texans’ interim head coach, became the rare former New England assistant to beat Coach Bill Belichick by leading the Texans to a 27-20 victory that started fast for Houston before grinding out into a fairly close game. Deshaun Watson passed for 344 yards, ran for 36 and accounted for three touchdowns; J.J. Watt was a hugely disruptive force; and New England, despite a 365-yard passing day from Cam Newton, finds itself contemplating whether last week’s big win over Baltimore was a fluke.