England beat Scotland 2-1 in their opening Women’s World Cup group match – but questions remain about how far Phil Neville’s side can go in France.

A Nikita Parris penalty and a goal by Ellen White put the Lionesses in control in the Group D game in Nice.

But Scotland, who were making their World Cup debut, almost took advantage as their opponents eased off.

“It taught us that every game is going to be hard,” said Neville afterwards.

BBC Sport’s pundits were less than impressed with aspects of England’s performance – while thinking Scotland’s display gives them hope of reaching the knockout stages.

‘Am I buzzing about England’s performance? No’

England arrived at the tournament ranked third in the world and with high hopes of bettering their achievements at the previous World Cup in 2015, when they finished third in Canada.

However, former England international Alex Scott and ex-Scotland goalkeeper Gemma Fay were in agreement after an unspectacular performance.

“Teams will be looking at this and will they be worried about this England performance? I don’t think so,” said Scott, who represented the Lionesses at three World Cups, on BBC One. 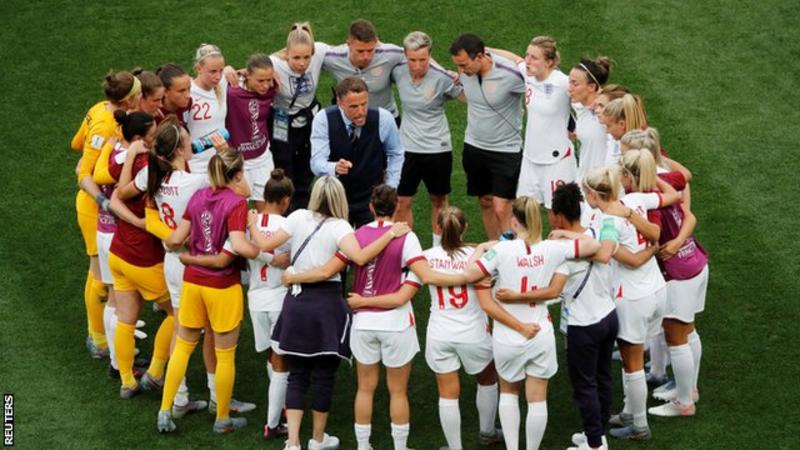 “Yes, England have done well but I don’t think they’ve shown any dangerous signs to make other teams worry and that’s what Phil Neville will be saying – ‘if we want to win a World Cup, we need to be better’.”

Fay, who retired from international football after Scotland’s exit from Euro 2017, having won a record 203 caps, echoed Scott’s thoughts.

“I watched France on the opening night and now I’ve watched England here. If I’m from France or the USA, I’m not particularly worried at this point,” she said.

In 2017-18, the Women’s Super League was played through the winter for the first time having previously taken place in the English summer.

“This is the first time we’ve gone into a tournament on the back of a winter league,” said Scott.

“I have question marks over how tired England looked.

“It was a sloppy pass by Steph Houghton [for Scotland’s goal] but it was a running theme. I think Fran Kirby gave the ball away a number of times, we were sloppy in attack.

“It’s all about being fresh going into World Cups and European Championships, but this team looked tired.

“Am I buzzing that England got the win? Yes. But am I buzzing by the performance? No.”

Former England keeper Rachel Brown-Finnis told BBC Radio 5 Live the Lionesses “still have a lot of work to do”.

She added: “Phil Neville will want a more polished performance in the next game,

“They got the job done but their aspiration is still to reach the final.” 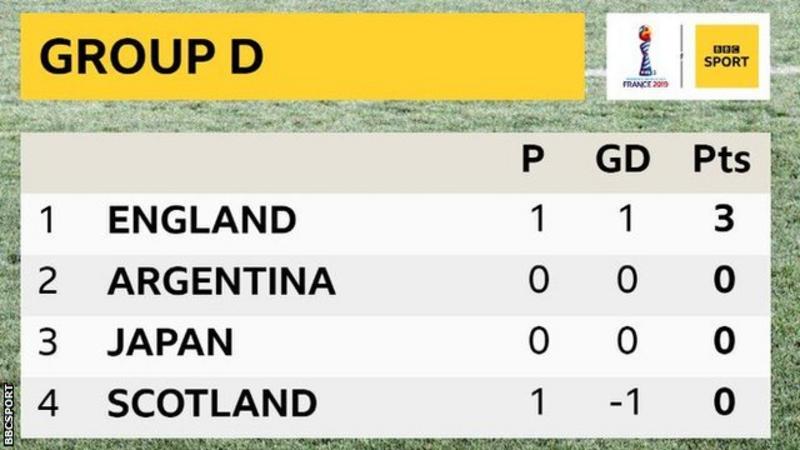 ‘Scotland have a fantastic chance of progressing’

Scotland are 17 places below England in the world rankings.

Shelley Kerr’s side won seven of their eight qualifying games to reach a first World Cup but their inexperience on the global stage told as they fell 2-0 behind in the opening 40 minutes.

However, a much-improved second-half performance left former Chelsea and Scotland winger Pat Nevin optimistic about their chances of progressing.

“England almost looked women against girls in the first half. But in the second half Scotland grew into the game and looked better and stronger,” Nevin told BBC Radio 5 Live.

“After today’s showing, I’d say Scotland have a fantastic chance of getting out of their group. Scotland know they can compete now and they’ll have learned so much from this match.”

Scotland’s next match is against Japan – ranked seventh in the world – on Friday in Rennes (14:00 BST) before rounding off their group campaign against Argentina, the group’s lowest-ranked country down in 37th, on 19 June in Paris (20:00 BST).

“At half-time Scotland will have been thinking ‘that first half’s done, we’re no longer debutants at the World Cup, now we can go on and play the football’,” added Fay.

“They came out in the second half and were a lot braver. I don’t know what substitute Kirsty Smith drank at half-time but when she came on she ran down that left wing and ignited some energy in the team.

“Claire Emslie did the same on the other side. They weren’t afraid anymore, they believed in their ability and it made a difference.”

“We do need to remember England are third in the world and a big force here – 2-1 is not an embarrassing result.

“The players will be pleased with their second-half performance and there’s a lot they can take into their next game.”

06/09/2019 Sport Comments Off on Women’s World Cup: ‘Other teams won’t be worried by England’ after win over Scotland
Recent Posts