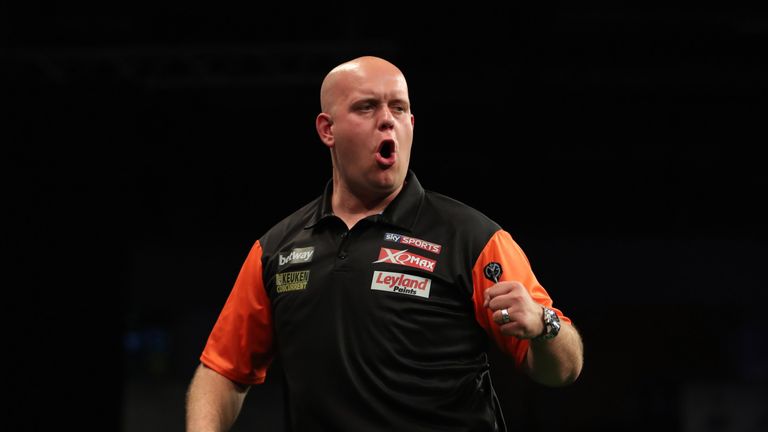 England and the Netherlands are the only two teams to win the World Cup of Darts, and after Friday night in Hamburg the pair remain on course for a potential semi-final showdown.

After Northern Ireland and Wales were dumped out on day one, England, the top seeds, and the Netherlands, the defending champions, followed Scotland in responding for the major contenders.

England’s new-look pair of Rob Cross and Michael Smith teamed up to beat the Philippines, while the Netherlands took to the stage for the first time without Raymond van Barneveld.

However, linking up with Michael van Gerwen, Jermaine Wattimena more than played his part in a 5-0 whitewash on his debut as the Dutch sent Spain packing.

Austria and Australia overcame tough battles to ensure it was a clean sweep for the seeded nations on the second night of the tournament.

The Netherlands’ bid for a third title in succession started in dominant fashion, whitewashing Spain, who never got a sight of another potential upset having stunned England in 2010.

Wattimena settled any nerves with a brilliant 108 finish and took out two more doubles with Van Gerwen pinning a pair of his own, including a spectacular finish to seal the whitewash.

With the Dutch 4-0 in front, MvG chose his moment having been outshone by Wattimena; a brilliant bull-double 16 combination sealed the 5-0 win in little more than 10 minutes on stage.

Poland underlined their status as one of the more fancied dark horses, powering to a 5-2 win over the Czech Republic with a 92.3 average and 56 per cent finishing record. 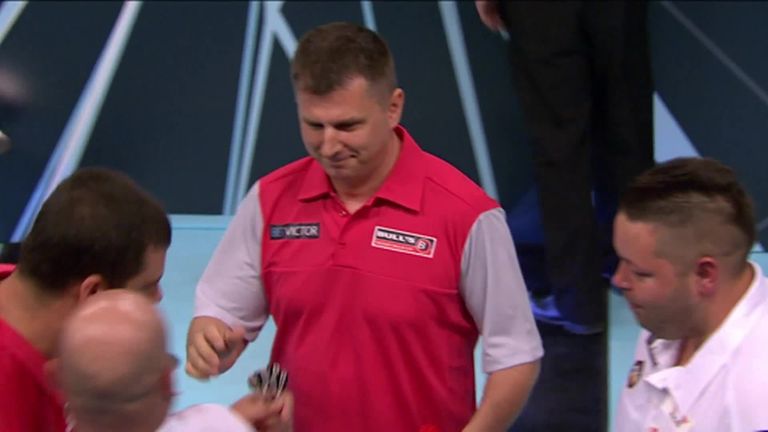 The Czechs had their moments, notably a brilliant 160 finish, the highest of the tournament so far, but Krzysztof Ratajski was rock solid throughout to lead his team into the second round.

New-look England start in style to set up Republic clash

Rob Cross got England’s bid for a first World Cup crown since 2016 off to the perfect start with a brilliant 106 check-out and with Michael Smith growing into his England debut, the duo never looked back.

It was @BullyBoy180 dream to play for England and he’s loving it #proudwife #proudkids pic.twitter.com/mdr34KE3b9

Their draw against the Philippines threatened to be one of the major banana skins of the first round, but it was negotiated with ease, as Cross and Smith shared the winning darts at double and Smith fired in some trademark heavy scoring.

Smith marked his England debut with a couple of clinical check-outs to put his recent finishing issues behind him and Bully Boy sealed the win after Lourence Ilagan had got the Philippines on the board. 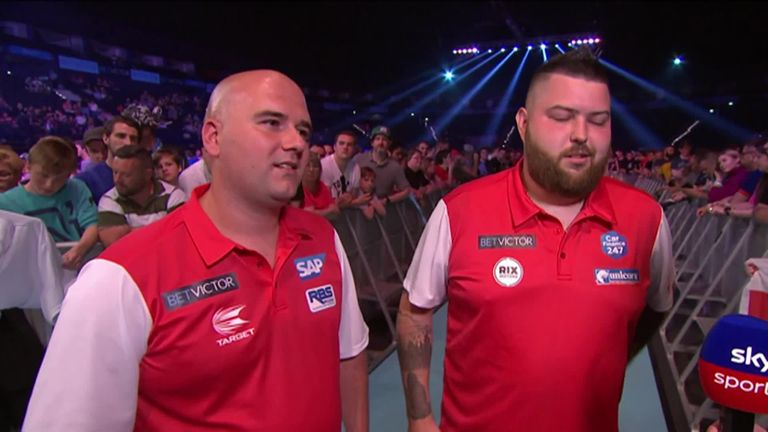 William O’Connor led the Republic of Ireland to a 5-1 win over Greece, firing the winning double in the final four legs to seal the victory.

Steve Lennon had got the Irish off to the perfect start but Greece were far from overawed as their 84.3 average showed but with the double chances being frittered away, O’Connor was on hand to mop up. 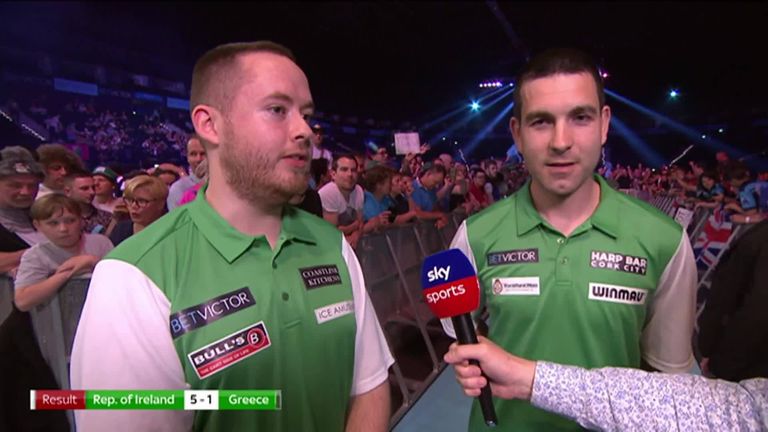 Australia and Canada battle through to set sights on quarter-finals

Australia, runners up in 2012, came out on top in a topsy-turvy contest that featured four breaks of throw and went the distance before a 14-dart hold of throw sealed a 5-4 win. 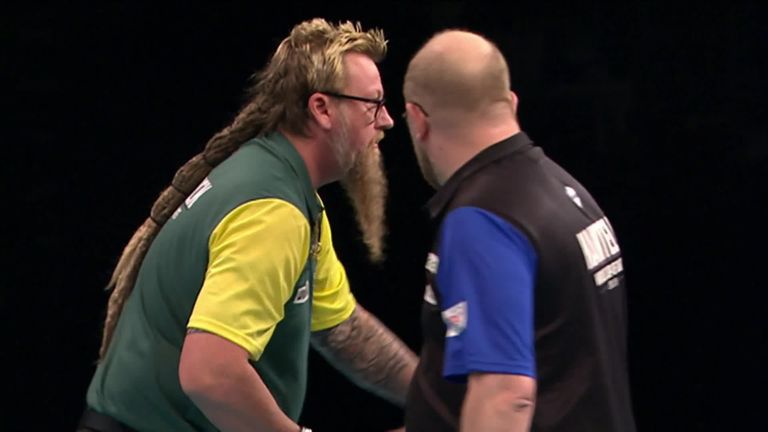 After breaking Australia to claim the opening leg, Finland missed a dart for a 2-0 lead and Kyle Anderson responded by breaking straight back and that set the tone for the match.

Finland led 3-2 and frittered away darts that could have kept them in front as Australia punished them to move 4-3 ahead before Kim Viljanen forced the decider where the Aussies eventually prevailed.

Italy and Canada played out a cracker early in the evening, with a John Part-less Canada eventually prevailing in a high-quality contest that featured big finishes and averages pushing 100 for most of the match. 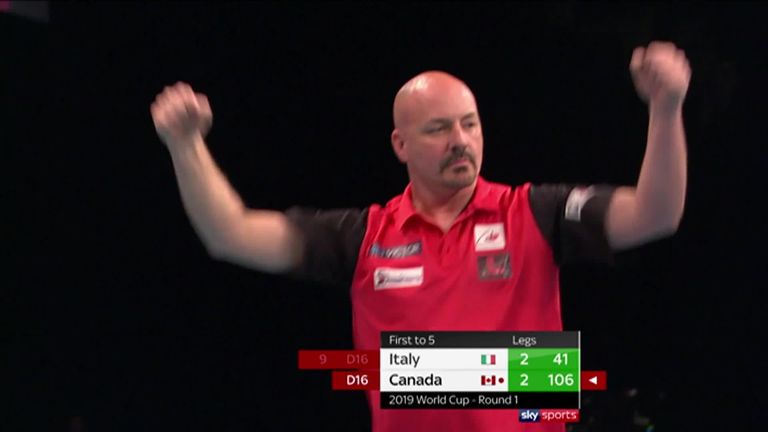 Italy were first to strike with a super 116 finish, but Jim Long’s 106 saw Canada respond in kind and the same man pinned double 10 to seal a 5-3 victory.

Austria and Russia played out a thriller but missed opportunities at a crucial stage cost Boris Koltsov and Aleksei Kadochikov the chance of the night’s big upset. 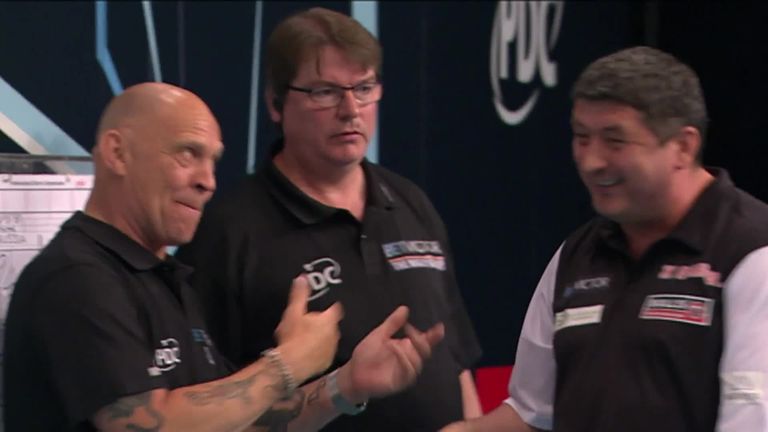 Russia had powered into a 3-1 lead and had darts to win the fifth and sixth legs but Zoran Lerchbacher pinned a nerveless double eight to draw Austria to within one and kick start a four-leg burst for a 5-3 win.

Mensur Suljovic’s brilliant 83 via the bullseye, a spectacular 138 from Lerchbacher and the same man’s winning double condemned Russia to defeat despite a 95 average.

USA will provide Austria’s opposition after the pairing of Darin Young and Chuck Puleo accounted for China who had been forced into a late change.

06/07/2019 Sport Comments Off on World Cup of Darts: England and Netherlands too good as seeds fight back
Recent Posts