After so many years keeping criminals out of prison by any means necessary, Jimmy McGill ended up behind bars himself.

Better Call Saul wrapped up its six-season run on Monday with a supersized series finale that saw Jimmy/Saul/Gene meet a fitting end: sentenced to 86 years in federal prison for his role in Walter White’s drug empire and all his other misdeeds. (Read our full recap here.) He could’ve gotten off with just seven years in a minimum-security facility (with a golf program!), but hearing that Kim made a full confession to the authorities triggered something inside him, and he changed his plea, taking full responsibility for his crimes, along with his role in the deaths of Howard Hamlin and his own brother Chuck, with Kim there in the courtroom watching. He also went back to going by the name “Jimmy McGill,” after years of living under an alias.

An incarcerated Jimmy got to share one last cigarette with Kim during a prison visit, and we even got to see Mike Ehrmantraut, Walter White and Chuck McGill again via flashbacks. We here at TVLine still had questions, though, so we reached out to Saul co-creator and showrunner Peter Gould — who wrote and directed Monday’s finale — to ask him how he and the writers came up with this ending, what changed Jimmy’s mind and if this qualifies as a “happy ending” for Jimmy and Kim.

TVLINE | We know the overall arc of the series changed a lot while you were working on it and evolved over time. So at what point did you settle on this particular ending, and what made you decide to go that way with it?
I think it was Seasons 4 and 5 that we started thinking about where this is all going, and we started having this image of Jimmy behind bars at the very end. Because what does he do for a living? He represents criminals. He’s the interface between the legal world and the criminal world, and he’s part of the machine of justice, but he’s the gear that does its own thing. He’s the one who find the loopholes and who lies. And it felt like maybe it’s a good idea for him to be a suspect and ultimately a convict, when he’s been dancing around outside for so many years. 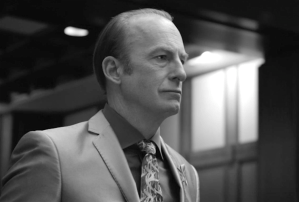 TVLINE | Jimmy confesses everything with Kim there in the courtroom when he could’ve just gotten away with seven years in a cushy federal prison. Did he see that as the only way to redeem himself and win back Kim’s respect and affection?
I think that’s part of it. He wants her there. There’s a lot of ambiguity there, and there’s a lot you could read in there. You can think: Would he have had the courage to do what he does if she hadn’t been there? You can see, at least in the way Bob [Odenkirk] plays it, he has every intention of going in there and confessing, but in a weird way, he’s almost a little proud and defiant to start with. And then Kim’s presence, I think, brings him down to earth and makes him more real. Did he do it to redeem himself? I think he’s breaking a cycle. This is a guy who wants to get away with everything. He likes to fool people. He likes to win in conversations. He likes to win in the court. He always wants to win. And I think he’s breaking out of something that we’ve seen him do over and over again. His behavior this season, especially in the last few episodes, it seems like it was all aimed at this result, in a certain way. He’s a little bit at war with himself, but then one side wins, and he comes clean there in the courtroom.

I think what you see with Jimmy, or Saul, he’s in a cycle where he always seems to react to things in the same way. Kim leaves, he becomes Saul Goodman. He has that phone call with Kim, that painful phone call while he’s in the phone booth in Nebraska, and she tells him to turn himself in, and how does he react to that? He goes on a crime spree. And even in the middle of a crime spree, he keeps pushing it harder and harder. It seems like he’s acting out something that he maybe couldn’t put into words. Finally, we felt like it was pretty important for this character to find out: Is he always going to be that way? Is there ever a chance for him to make a change? And for all the pain there is in the finale, he does make a big change, which is: He stands up in court and tells a good part of the truth. He doesn’t tell all of the truth. But he tells a good part of the truth, and certainly the part of the truth that’s going to get him in the most trouble. 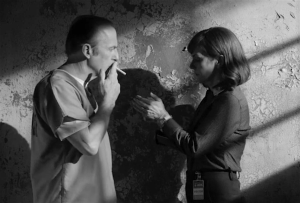 TVLINE | Jimmy and Kim do end up sharing that last cigarette at the prison, which was a great callback to the pilot where they’re leaning against the wall together. It may not be a conventional happy ending, but is this maybe the happiest ending we could expect, given the circumstances?
I think so. In my perfect world, to me, the great movies — and we aspired to it, I don’t know if we achieved it — but the great movies keep driving the story in your head after the movie is over. Jimmy and Kim are both still alive. They’re both kicking. He seems to have found a way to survive behind bars, and she certainly seems like she’s headed back into the law. So in a weird way, I think it is a happy ending. In my heart, I always wonder if he’s going to end up serving that entire heavy sentence that’s been given to him. We’ll see.

TVLINE | We did get one more scene with Chuck McGill, and it was great to see Michael McKean again. Was that flashback what Jimmy really would change if he could go back in that time machine: to just be a low-profile Albuquerque lawyer and still bring his brother groceries?
Yeah, when we first meet him in the pilot, that’s exactly what he’s doing: He’s bringing the groceries to Chuck every day and begging Chuck to cash out of HHM. In this moment, these two guys, their relationship could’ve changed, maybe.

TVLINE | Yeah, and that tied back into the other two flashbacks where Jimmy didn’t really have any big regrets he wanted to go back in time and change. Walter White even says, “You were always like this.”
[Laughs] Well, Walt’s the same way. He just stole a baby and rolled around on the floor with his son, and yet his regret is about something that happened to him in graduate school. So I think these guys, in that scene, they’re both avoiding the elephant in the room… In all three of those flashbacks, you see [Jimmy] avoiding introspection and resisting change. You know, change and introspection are really tough, but if you wait too long, maybe you end up in a federal penitentiary.

Give the Better Call Saul series finale a grade in our poll, and then hit the comments to share any burning questions you still have.