Hip hop star Cardi B recently received backlash for the Thanksgiving gathering she posted about on social media, prompting her to apologize and clarify things on a fan’s now-deleted tweet.

Cardi’s follow-up apology tweet and reply to a fan about COVID-19 came in response to the criticism she received about how many people had gathered together for her holiday celebration this past weekend.

The gathering, backlash, and follow-up apologies arrive a few weeks after the hip-hop star called off her divorce proceedings with Migos rapper Offset.

Thanksgiving had a different look and feel for many people this year due to the continued health and safety recommendations amid the COVID-19 pandemic. As cases continue to rise, it meant limiting the size of groups that could get together to enjoy the annual holiday.

Public health officials had recommended Americans to keep their Thanksgiving gatherings smaller than usual as part of their advice, but not everyone followed that suggestion, including Cardi B’s group.

“12 kids and 25 adults over the holidays. It was lit !!” Cardi tweeted out with regards to her Thanksgiving gathering.

After the WAP rapper tweeted about her Thanksgiving celebration, it understandably drew backlash from many people as they couldn’t celebrate in a similar fashion.

Comments included people asking if everyone tested negative for COVID or calling out the rapper for ignoring health and safety guidelines. Other commenters suggested that Cardi delete the tweet before she got attacked for it. That didn’t happen quick enough, but the rapper was ready to respond.

Due to the backlash that Cardi was getting over her Thanksgiving celebration post, she took to Twitter again to apologize and also inform people of the circumstances.

“Sorry my bad wasn’t trying to make nobody feel bad. I just had my family in my home for the first time and it felt so good & uplifted me. I spent soo much money getting every1 tested but it felt worth it. I wasn’t trying to offend no1,” Cardi tweeted on November 29.

Cardi’s tweet was a reply to a fan’s tweet that has since been deleted as seen in the screenshot below. 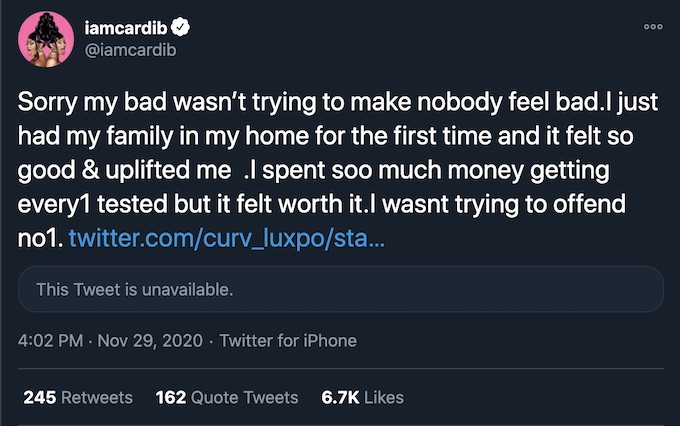 In addition to that apology and letting fans know about how the situation was handled, Cardi replied to another fan about COVID-19 testing. Based on her response, Cardi B, and those she works around are tested often.

“ME specially and everyone that works around me get tested literally 4 times a week. Im in the middle of work and Everytime we clock in we MUST GET TESTED!” she replied to a fan. 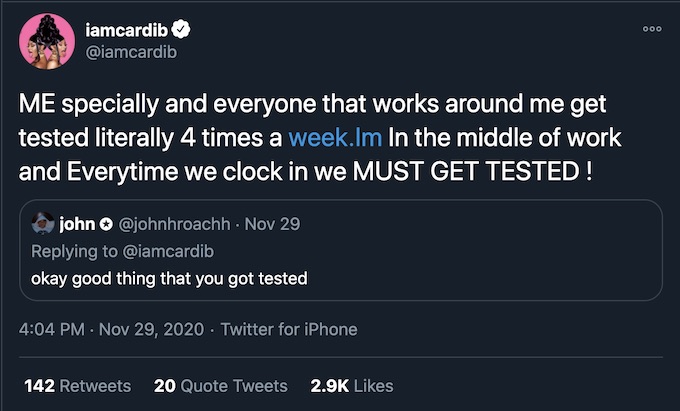 In another follow-up tweet, Cardi posted, “People be trying tooo hard to be offended.I wonder how they survive the real world.”

Back in October, it was reported that Cardi B and Offset had rekindled their relationship during Cardi’s 28th birthday parties in Las Vegas and Atlanta. In early November, reports arrived that she dismissed her divorce case in which she asked for “primary physical custody” of her and Offset’s two-year-old daughter, Kulture.

As the relationship appeared back on track, Cardi updated her fans on the situation and why she was back with Offset.

Cardi and Offset, real name Kiari Kendrell Cephus, have been married since 2017 and have just one child together. Along with her relationship, Cardi has appeared as part of the main cast for Love & Hip Hop: New York in Seasons 6 and 7.