I feel sorry for the writer-director Don Mancini, who co-scripted the first Child’s Play in 1988 and has continued to chronicle the adventures of the murderous doll Chucky in a series of bizarre, campy, sometimes poetic sequels, the most recent of which, Cult of Chucky, was released in 2017. 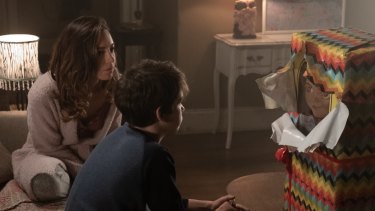 This shiny new remake starts the story all over again, with no creative involvement from Mancini at all. Still, fans of the series shouldn’t be too quick to judge: the new team of director Lars Klevberg and screenwriter Tyler Burton Smith have worked hard to give Chucky a 21st-century makeover and their film has, if anything, a surplus of strong ideas.

The first such idea is that Chucky (voiced by Mark Hamill) is now no mere doll but an all-purpose robot equipped with the latest in voice-recognition technology and capable of syncing with other electronic devices. This allows the film to tap into resurgent fears of artificial intelligence and of corporations who may not have our best interests at heart.

The original Chucky was possessed by the spirit of a serial killer but here we’re given a simpler explanation for his evil: at the Vietnamese factory where he’s manufactured, a disgruntled employee takes revenge by switching off the restraints that stop each toy's programming from going awry.

The implication – this is the second good idea – is that Chucky is a reflection of his environment: he learns bad behaviour as he goes along, recording everything he sees and hears for future reference.

The environment in question is the apartment of single mother Karen Barclay, played, in the film’s third good idea, by the always winning Audrey Plaza, who makes her obviously flawed character much more likeable than a stock virtuous heroine and who pours as much energy into being disaffected as anyone since the heyday of Bill Murray.

When Karen’s lonely, hearing-impaired young son Andy (Gabriel Bateman) receives Chucky as an early birthday present, initially he isn’t too thrilled: he’s a bit old to be playing with dolls, even high-tech ones. But soon the pair become inseparable and the novelty value of Andy’s new toy helps him acquire some other new friends as well.

Chucky’s only built-in fault, it would appear, is that he loves too much. Programmed to fulfil his master’s every need, he soon becomes the custodian of Andy’s repressed feelings of anger, aimed at Karen’s boyfriend Shane (David Lewis) and even at Karen herself.

Andy, for his part, seems to view Chucky mainly as a means to an end, so Chucky emerges as a figure of pathos in his own right, much like the android hero of Steven Spielberg’s masterpiece A.I. Artificial Intelligence, who yearns fruitlessly to become a “real boy”.

That’s already a lot to pack into an hour and a half, without even mentioning supporting players such as the building’s voyeuristic caretaker (Trent Redekop) or the sardonic cop from down the hall (Brian Tyree Henry from Atlanta).

Inevitably, much of the thematic material feels sketched in rather than fully realised, though the sense of possibilities jostling against each other is part of the pleasure of this kind of genre cinema.

If there’s a central complaint, it’s that the relatively sensitive Chucky isn’t as unnerving as the original, who, as voiced by Brad Dourif, was a nasty little brat through and through.

That said, no punches are pulled in the murder set-pieces, which proceed in traditionally gruesome slasher movie fashion. There are also some passages of genuine suspense, especially when the evidence of one of Chucky's crimes keeps resurfacing.

The movie has something for everyone, even for those who deplore the corrupting influence of pop culture on today’s youth. But the overriding aim is to give the traditional horror audience a rollicking good time: the bloodiness is part of this, along with the stylish cinematography by Brendan Uegama, who does a lot with dark rainy evenings and coloured lights.