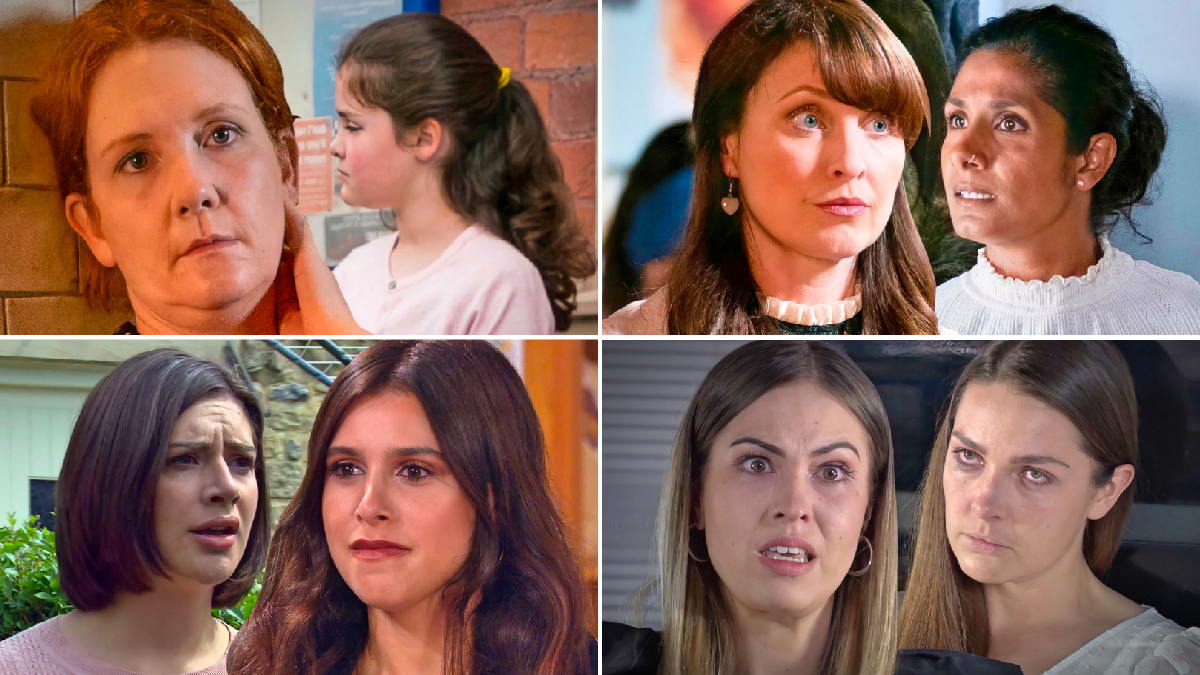 Next week is shaping up to one of soapland’s finest of the year, with a revenge plan set to spiral out of control, as a child abduction causes mass panic.

Summer Ranger’s scheming comes to a thunderous conclusion, as she attempts to murder her one true love Sienna Blake in Hollyoaks scenes which you simply cannot miss!

After months of manipulation, it all comes down to one final showdown between the two lovers, as a gunshot is fired.

And it’s not just Summer who’s up to no good next week, as Emmerdale’s resident killer Meena Jutla kidnaps beau David Metcalfe’s child Theo in order to teach Victoria Barton a lesson!

Death is the topic of discussion in EastEnders, as Suki Panesar makes a shocking admission to pal Honey Mitchell, rendering her speechless in the process.

And Coronation Street is set for yet another unmissable week of drama, as Hope Stape’s crime is reported to the police by none other than Tyrone Dobbs.

It’s a week that will change everything for some, and here’s all you need to know.

Fiz spends the night in a police cell, after claiming that she started the fire, but Tyrone decides to the do the right thing, as he tells the police that Hope is responsible for the blaze. Fiz berates him, but Evelyn forces the former couple to put on a united front for their daughter. They do just that, explaining to the little girl that the police will want to talk to her, before delivering her to the station. Hope’s solicitor later reveals that she will be charged, and could face trial!

Alina is upset to hear Jenny, Sally and Tim full of sympathy for Ty and Fiz, and proceeds to get very drunk. She’s heartbroken to see Fiz and Tyrone heading into No.9 with chips, and later explains to her beau that she’s felt forgotten about amid this whole situation. Tyrone is regretful of how it all turned out, saying he’d imagine they’d have got married and raised a family. Alina agrees to try again, and get married, leaving Tyrone in shock as he realises he’s just accidentally proposed!

Nick and Leanne refuse to up their offer for half the bistro, forcing Debbie to set up a conversation with Ronnie, who pretends to be a potential buyer. Leanne listens in, but guesses it’s all part of a set-up on Debbie’s part. She therefore tells Debbie she has found a cheaper proposition in town. Nick admits he’s concerned that Debbie and Leanne will clash if they work together, but the two women end up taking the fish supplier to task after a customer complaint, leaving Nick smiling, as he reckons they’re a force to be reckoned with.

Honey offers to help Suki sort through Jags’ belongings, but Jay interrupts with some good news: She’s been nominated for a Pride of Walford award for the party she threw over Christmas. Suki is disappointed, as Honey has a fancy dinner to go to. Honey, however, insists on taking Suki as her plus one, but Kheerat storms in and berates Suki for chucking Jags’ belongings in the bin! Suki confesses all to Honey, revealing that Jags is dead because of her!

Kim and Denise question Amy about her social media post on mental health, but parents at school have left nasty comments calling for Isaac to be let go. Lola visits Isaac, while a fellow inpatient mentions her strained relationship with her son, which leaves Isaac with food for thought. Sheree, meanwhile, learns about the parents’ trolling, and later visits Isaac with Patrick and Kim in tow. She’s surprised to learn of Lola’s regular visits. Sheree tells Lola to break up with Isaac, persuading her it’s the right thing to do. Lola therefore visits Isaac and breaks the news.

Kheerat becomes a joint partner at the Arches, leaving Jay shocked. Jay warns Ben that he should be more of a silent partner, while Callum is worried about Kheerat becoming too involved in the business. Ben insists that everything is fine, but when Kheerat announces he’s done a deal for some new business, Ben is frustrated. Ben therefore reveals he wants out, leaving Kheerat livid, but he later heads to apologise to Kheerat. Matters are complicated further, when a police car arrives.

Victoria and David draw up a rota of childcare between them, and Meena is not pleased when, hoping for a steamy afternoon with David, she finds out that he’s babysitting! After she witnesses David reject her call to carry on talking to Victoria, she decides to take action, and sneaks into Victoria’s, looming over Theo. Afterwards, Victoria comes to discover that Theo is gone! What’s more, the baby gate and the back door are open.

Leyla pops a pregnancy test in her bag, and later, we discover that she is pregnant. She hopes Liam will be happy about the news, but when he mentions that he cannot take any more surprises, she knows it’s not the right time, fearing it could end her marriage.

April feigns happiness as she opens her cards, but it’s clear that she’s struggling. she admits to Cathy that she’s terrified of being at home, and when she receives a card from her troll, she feels like they’re closing in. Fed up, April responds to the online troll, but soon regrets retaliating. She locks herself away, worried that the troll will show up on her doorstep.

Sienna finds Summer’s diary, in addition to the gun that was used to shoot her! She attempts to trick Summer into coming clean, but her plan swiftly backfires. Everything begins to fall apart, as Summer goes head to head with Sienna in a showdown that will change everything, as she resolves to kill her! We’re afraid we can’t reveal the outcome, but what we can tell you is that you can expect a spiked drink, an arrest and a gunshot!

Ste, convinced that something transpired between James and John Paul, confronts James. Not satisfied with James’ response, he sets out to locate John Paul instead, and he finds him violently drunk. Ste demands answers, but John Paul is not happy, and he loses it, punching him! James later discovers that Ste has a black eye, and once he realises that John Paul is responsible, he’s horrified, wasting little time in confronting him about the assault.

Brody fills Damon in on what Summer is up to, making it clear that it’s time he took matters into his own hands. Damon, however, struggles to take a back seat, and therefore decides to trick Summer. But he’s soon double-crossed, leaving Brody in panic when he’s unable to get in touch with his mate! Things are then complicated further when he discovers someone has tipped the police off about his presence in the village.