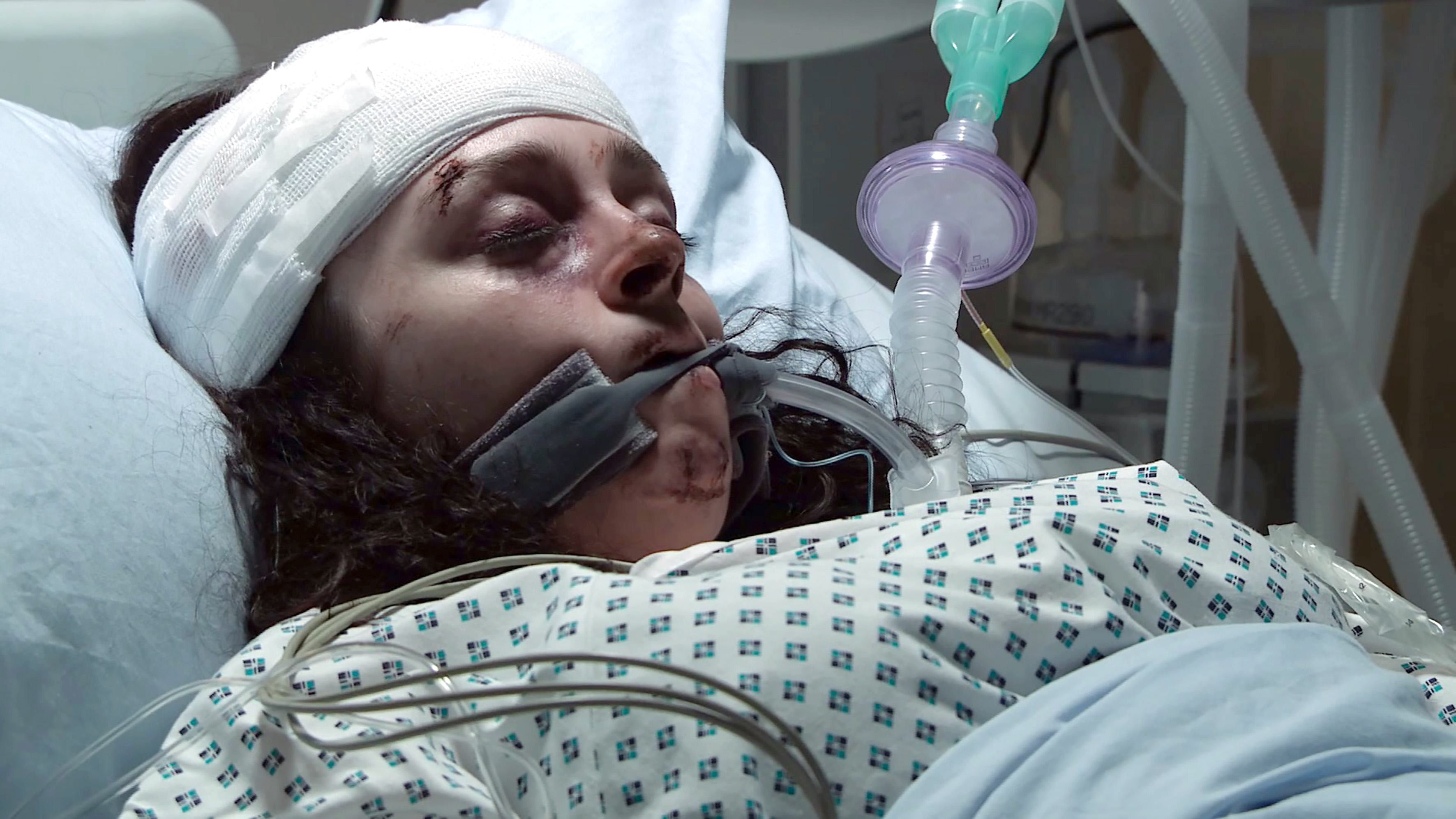 Coronation Street actress Mollie Gallagher has admitted that she was filled with genuine panic when filming scenes tonight which see her character Nina Lucas and her boyfriend Seb Franklin (Harry Visinoni) set upon and beaten to within an inch of their lives by a hateful gang.

Nina and Seb wander into a situation where Corey (Maximus Evans) and his gang surround them and intimidate her with insults and threats. As Nina urges Seb away from the nastiness, they are followed and ambushed – with horrific consequences.

Mollie told Metro.co.uk: ‘She has had name calling before and is used to that, but then the slap happens and they are egging Kelly on. She thinks Kelly isn’t going to do it but then she does and realises it could escalate further.

‘I remember filming it and you can feel the panic. When we were filming it, there was something about the day which did feel a bit intimidating – I think because it was just me and Harry against a big group of people.’

Both Nina and Seb are left in a bad way and Mollie went on to explain that seeing the realistic injuries done through make-up for the first time was a shock to the system.

She explained: ‘I remember the first time I had it done, I hadn’t filmed any scenes yet and I’d just been rehearsing it in my mirror at home by myself. As soon as the makeup was done, I just wanted to cry. I remember looking at my reflection and thinking, ‘wow’.

‘I already knew it was awful but when you’re actually in it, I thought I could cry. It was a really strange feeling. I kept thinking about all the scenes and what was coming up.

‘It did help in a way as I was able to hold that feeling when we filmed the scenes. It was a massive help.’

And part of those scenes will see Nina question her appearance and entire identity. Mollie hopes that one day her character can overcome this but at the same time, praised the exploration of someone with such strong links to her own identity being impacted as Nina is.

Mollie sighed: ‘With Corrie, we’ve been able to watch Nina grow and get to know her character. People like her because she is who she is. She stands up for herself and those around her. I think it’s so powerful to see such a strong character and what it does to her identity.

‘I think that’s a powerful message and shows how much this can impact somebody. The thing about Corrie is that it feels so real. It’s awful but it does show the effects, definitely.’