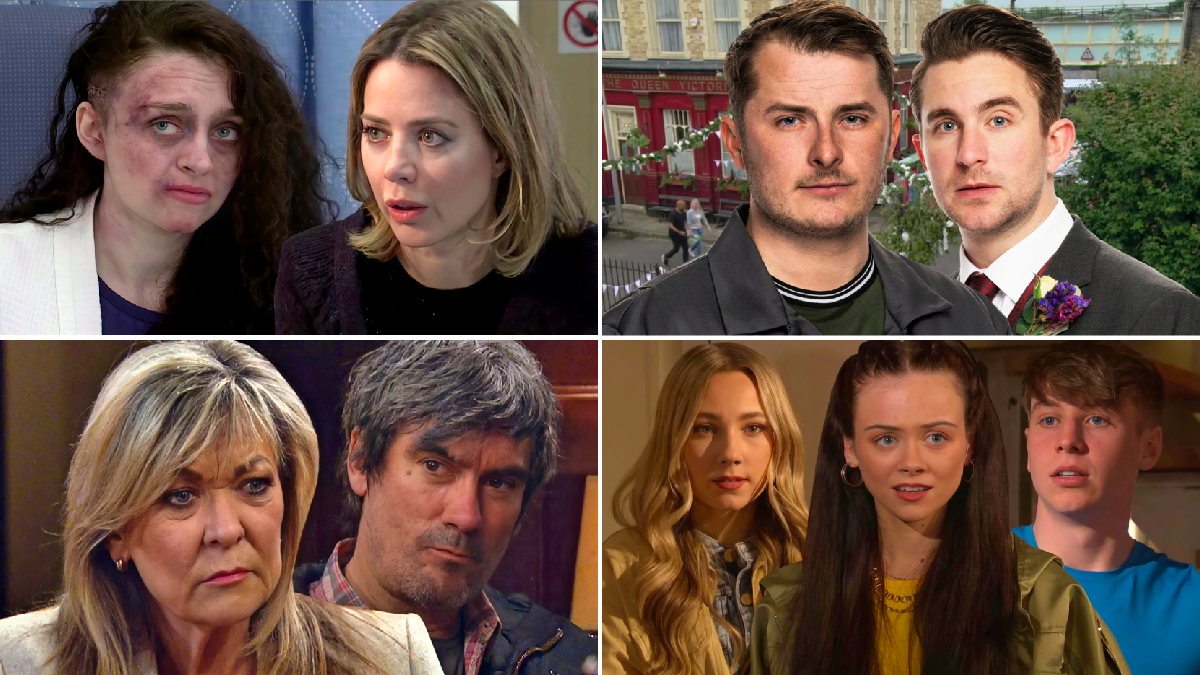 The attack carried out on Nina Lucas (Mollie Gallagher) and Seb Franklin (Harry Visinoni) continues to send shockwaves through the cobbles in Coronation Street, as Abi (Sally Carman) becomes hellbent on revenge next week.

Meanwhile, over in Albert Square, wedding bells are chiming, as Callum Highway (Tony Clay) makes his way down the aisle – hoping to marry love of his life Ben Mitchell (Max Bowden).

The question is: will Ben turn up? Will the EastEnders wedding of the year go ahead?

It’s a big week for many of soap’s finest, and here’s all you need to know.

1. Abi is hellbent on finding out who attacked Seb, and therefore she quizzes Nina. Nina, however, struggles to remember anything – admitting that it’s all a blur – and therefore gets upset. A police officer later arrives on Abi’s doorstep, and reveals that they’ve charged someone – confirming that Nina’s appearance seemingly triggered the attack.

2. Corey demands that Asha provide him with an alibi, while ordering her to do whatever it takes to make sure Amy doesn’t blab. Asha does as he asks, as she sets off to meet with Amy, but Dev spots her, and who begs her to come home – aware that she’s living with the prime suspect in the heinous attack.

3. Kelly’s worst fears are soon realised, as the police arrive and take her away. Terrified, she refuses to answer any questions and, afterwards, she visits Corey – admitting that she thinks they should come clean. Corey, however, sends her packing! Toyah, meanwhile, tries to get Kelly to tell the police the truth, but Laura returns, and orders her daughter to keep quiet!

4. Summer opens up to Todd, explaining that she was present on the night Nina and Seb were attacked, but assures him that she left before anything happened. Afterwards, she comes clean to Billy, who is utterly appalled that she went joyriding in a stolen car. He insists that she tell the police everything.

5. Nina decides to pack a bag and discharge herself from the hospital in the hopes that revisiting the scene of the attack will jog her memory. Roy, however, arrives in the nick of time and talks her out of such a thing. Evelyn, meanwhile, returns and, while in the cafe, she’s rude about Kirk’s IQ. Roy is livid, and likens her vitriol to that suffered by Nina, and thus throws her out!

6. Michael and Grace return home with Glory, and Ed loves making a fuss of them, but he soon decides to visit Aggie in order to give them some space. Michael and Ronnie, therefore, see him off on his trip.

7. David suggests that Daniel could tutor Sam. Daniel agrees, but he gets quitter the shock when he arrives at No.8 to find that Sam has set him a test to see if he’s up to the job!

8. Callum wakes up on the morning of the wedding with jitters – terrified that Ben won’t show up in the wake of the truth about his undercover op being exposed. Ben, meanwhile, shows no signs of getting ready, prompting Phil to question him about what happened between he and his lover. Ben refuses to open up, but Stuart inadvertently puts his foot in it and reveals all about Callum’s undercover operation to Phil – leaving him seething!

9. Nancy struggles to speak to Linda, who refuses to support her decision not to have children. She later opens up to Sharon, but they’re interrupted by flirty Zack, who then takes Nancy for a drink. Nancy jokes that he can help her by acquiring her a toothbrush, but charming Zack takes her suggestion a bit literally as he heads off to the Vic to pick hers up!

10. Sharon asks Nancy to look after Albie for the afternoon, and Nancy agrees. However, Nancy soon feels an epileptic seizure coming on, and thus puts Albie safely in his playpen, before calling Mick, who arrives in the nick of time as she collapses to the floor.

11. Bailey is staying at the underpass with little Banjo by her side. Some youths approach and cause trouble, as they steal her bag. Banjo, protective as ever, gives chase, leaving Bailey determined to find him. As she does so, however, she’s approached by a man named Reg, who claims to have known her mum.

12. Rainie accompanies Bernie to her appointment at the doctors, and unfortunately it’s not all good news. The doc informs Bernie that there are a number fo factors that could result in complications with a potential pregnancy. Rainie displays doubts in the wake of this information, but Bernie attempts to convince her to proceed as planned.

13. Kheerat invites Sharon out for a drink, and she accepts his offer. The pair reminisce about their love lives over a glass of wine, but Kheerat puts his foot in it, leaving Sharon upset. She leaves, but later returns – seductively appearing in the doorway of the call centre!

14.Karen receives a vile note, and later she snaps when offered a free meal from the cafe! She’s sick of everyone judging her.

15. Having discovered that Mack stole Brenda’s brooch, Aaron pleads with him to return it, but he refuses to do so. Eric, meanwhile, is forced to explain to Brenda that he’s only got eyes for her, but she ends their relationship. Determined to make things right, Aaron steals the brooch back from Mack and sets about returning to its rightful owner, but Eric catches him in the act and clobbers him with a baseball bat!

16. Jimmy confides in Mandy about his struggles, and Mandy reckons he needs to put Carl first when considering his plea. Therefore, he invites Juliette around for a chat, and later reveals to Nicola that he’s intent on pleading guilty – and there’s nothing she can do to stop him. Nicola is horrified, but Jimmy refuses to discuss the matter further.

17. Liv is upset when Vinny reveals the therapy sessions are leading him with more and more questions, and struggling to cope under the pressure, she takes another drink of vodka. Vinny catches her drinking and realises she’s at breaking point, but will the truth about Paul’s demise come to light?

18. A woozy Kim pops by to check on Lydia – who is still distraught over all the nasty rumours circulating about her – which leaves Cain somewhat suspicious.

19. Marlon attempts to lay down the law to his prospective new tenants.

20. Tracy – having had enough of the tension between the Dingles and Eric – asks Eric to take her home from the christening.

21. Cleo finds herself in a tough situation when she suspects that her patient Tommy is being abused by his stepdad Adrian. Toby reminds her that a hunch simply isn’t reason enough to get involved, but Cleo is on a mission. Toby, meanwhile, hatches a plan to seek revenge, and later Cleo is concerned that both she and her beau could be in trouble when DS Cohen arrives at the hospital.

22. Martine is preparing to receive her biopsy results – on the same day the winner of Dee Valley Business Woman of the Year is revealed. Grace tells her that she can accept help, and decides to tag along with Martine as she heads to hospital – determined to support her.

23. Katja returns to the village and demands a large sum of money from Fergus in exchange for her silence. Fergus calls Warren and informs him that a mystery person has evidence of the laptop heist and is demanding money. The dodgy businessman suggests that there is only one way out of this mess. Warren, desperate to ensure his future, agrees to silence the blackmailer for good.

24. Juliet receives a message from an unknown contact in a scene which is no doubt bound to piqued viewers’ interest, but her behaviour soon leaves Peri believing that her girlfriend is dealing once again. Peri then comes to believe that Juliet is seeing Sid behind her back!

25. The McQueens are getting rid of all of George’s stuff, but Goldie regrets selling the copper’s old tablet, as the buyer finds new evidence for the murder case.