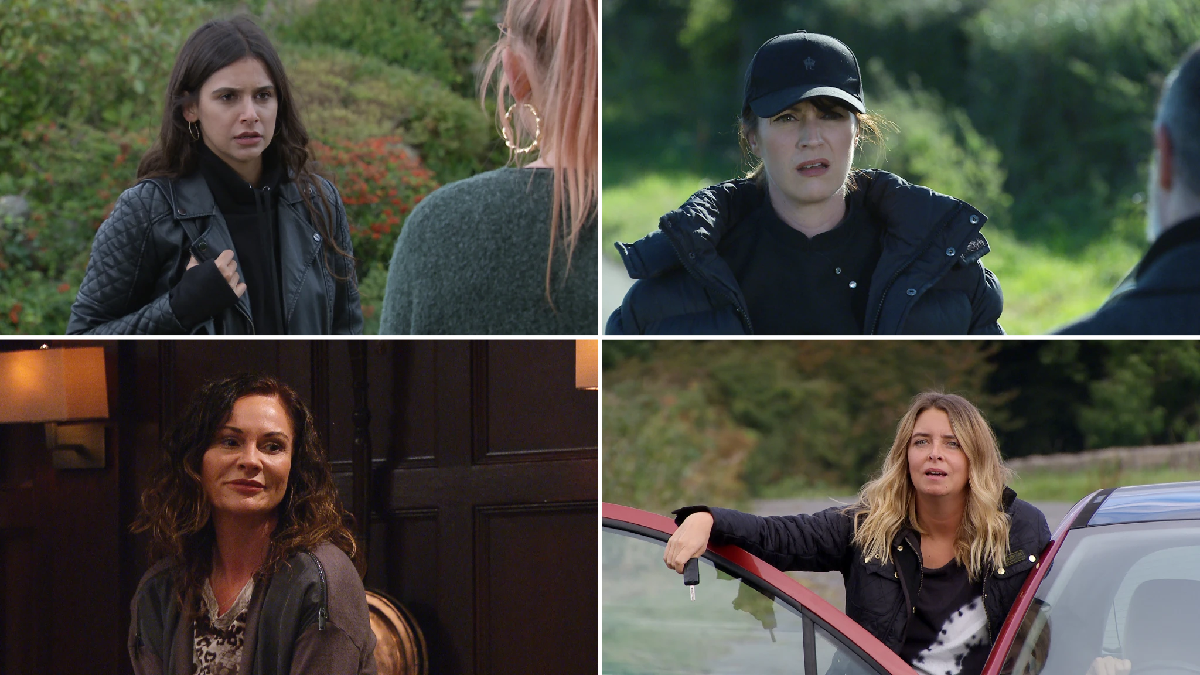 Meena Jutla (Paige Sandhu) is on another rampage in Emmerdale as she is left fuming to discover that David Metcalfe (Matthew Wolfenden) and Victoria Barton (Isabel Hodgins) have gone on holiday together. But as she trashes the cottage, the police come calling…

Elsewhere, Al Champman’s (Michael Wildman) scheming continues – but he has his eye on more than the Woolpack as he flirts with Chas Dingle (Lucy Pargeter).

Noah arrives for a secret rendezvous with Chloe. When Chloe tacitly suggests that they take their
relationship to the ‘next level’, Noah’s embarrassed and doesn’t know what to say.

Mack sees an opportunity to get Noah on-side by offering him advice on his relationship with Chloe and offers Noah a couple of condoms, Later when Charity reveals she doesn’t want Chloe anywhere near her kids, Mack realises he’s made a mistake in encouraging Noah and Chloe’s relationship.

Soon Noah heads off for his date with Chloe feeling nervous. Noah’s apprehensive but after she seems impressed by what he’s prepared at the barn, Noah feels relieved. Noah can’t believe his luck when Chloe makes the first move. In the village Mack covers for Noah’s whereabouts. Mack catches up with Charity and tries to explain himself, but she declares that their relationship is
over. Back at the barn, Noah worries Chloe won’t want to see him again. Kerry arrives to pick Chloe up. As they drive away, we see an ominous car following them.

Aaron’s supportive when Ben starts searching for a new job. However, Ben’s having to hide the
fact he’s applying for jobs on the Cornish coast. How will Aaron feel?

Tracy brings up the subject of Moira’s affair with Nate, Moira’s surprised by Cain’s coolness
towards her.

Meena laments over David choosing Victoria and soon finds support in Nicola, who’s had her own share of David drama. Meena’s determined to show David what he’s missing, and win him back. While Nicola is encouraging, Amy isn’t.

Paddy and Marlon see that Al has hired Ellis without Chas’s or their consent.

Paddy’s taken aback when Chas agrees to give Ellis a shift at the Woolie. Later, Trevor the brewery rep arrives at the Woolpack and sets Zak up to taste one of Al’s new ales. When Zak gives it a perfect score, Impressed Chas prepares to sign a contract with Trevor’s brewery.

Meena finds less support from Manpreet.
Meena is soon shocked to hear David and Victoria have gone to Portugal, furious she sneaks into Victoria and Amy’s house and smashes the place up.

Kerry begins her search to find them before it’s too late. On a country road Kerry is confronted by two thugs

Al unveils a new staff uniform for the Woolpack team, Al makes a flirtatious comment to Chas,
which leaves her looking unnerved.

Will’s feeling stir-crazy, cooped up in Home Farm with a sombre Bernice. Dawn speculates Bernice
has a thing for Will, and the theory leaves him feeling uncomfortable.

Chas tells Al that he’s overstepped the line with one of his flirty comments. Al pretends to be understanding, and Chas seems grateful.

Amy is shocked when she discovers the damage and calls the police. But when PC Swirling goes to interview Meena, she denies everything and isn’t arrested – Amy vows she’s going to prove it was her and it is about to get physical, when Billy intervenes. Calling him her knight in shining armour does Meena now have him keenly in her sights?

The thugs threaten Kerry with harming Amy unless she tracks them down. Terrified, Kerry returns to the village to update Charity, Mack and Sarah on her altercation. Meanwhile, runaway Chloe wonders if Noah’s already getting cold feet. Soon the pair are spotted by Kerry and Charity and driven back to the village.. Charity is adamant the pair can’t be together but Kerry privately has concerns about returning Chloe to her life of relative captivity. What will Kerry do or has she just brought more trouble to her door by getting involved?

Soon Will’s railroaded into accepting Bernice’s offer of a home-cooked meal. But soon comes up with an excuse he’s been called away on business – but has he?

Paddy tells an angry Chas that he has to attend an overnight training course. Al invites Chas to a business dinner. Over dinner Al heaps more compliments onto Chas, and we’re left wondering if Chas might have feelings for him.