“I was at first concerned that we were going to get something that was really saccharine and ‘Afterschool Special,’” Lifetime’s Amy Winter says

After years of criticism, Lifetime and Hallmark are finally including LGBTQ characters and storylines in their holiday movies in a prominent way: Hallmark with “The Christmas House,” featuring Jonathan Bennett and Brad Harder as a gay couple looking to adopt, and Lifetime has “The Christmas Setup,” the channel’s first-ever movie starring gay leads, played by married-in-real-life couple Ben Lewis and Blake Lee.

While Lifetime’s movie is a bigger stride, as it features a gay couple as the leads rather than part of an ensemble, both projects mark significant turning points for the leaders in holiday TV movies, which have faced repeated backlash each holiday season that goes by without LGBTQ representation in their slates and repeatedly said they will address the problem.

So why did the cable channels decided to listen to a very vocal group of fans and make that change in 2020 — even though each is still devoting a large portion of its slate (30 movies for Lifetime, 40 for Hallmark) to heterosexual-centric romances? 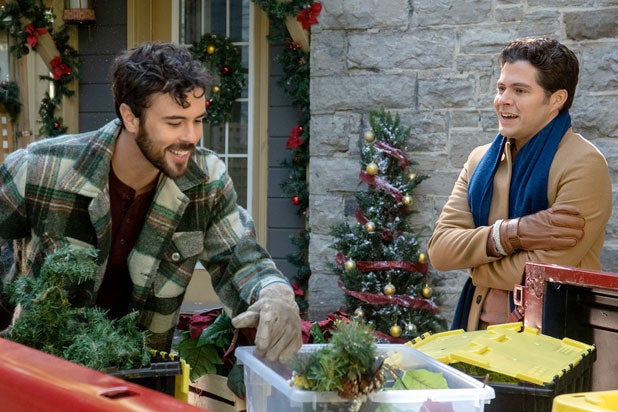 “Inclusion has always been a huge part of Lifetime’s plan. Across the board, not just in Christmas, we really feel like we want to reflect the audience around us and the world around us. So it’s been a priority from Day 1,” Amy Winter, head of programming at Lifetime, told TheWrap. “The biggest thing is feeling like we’ve got the right script in order to do that authentically. So when we were first talked about doing an LGBTQ-led romance, I was at first concerned that we were going to get something that was really saccharine and ‘Afterschool Special.’ So I was like, OK, are we sure? Let’s see what we get here.”

Winter said she would only give the green light to an LGBTQ holiday movie with an LGBTQ creative team behind it, which she found in Michael Murray (writer), Pat Mills (director) and Larry Grimaldi (executive producer) of “The Christmas Setup.” The network also worked with GLAAD to ensure the movie represented the LGBTQ community sensitively and accurately.

“And I have to tell you that Michael Murray delivered the most fantastic script,” Winter continued. “It is a Christmas movie through and through. Delightful, funny, warm, charming and exactly what you want out of a Christmas movie, just starring two men — who are actually married to each other, which is fantastic — falling in love.”

“The Christmas Setup,” which premieres Dec. 12, follows the story of New York lawyer Hugo (Lewis) “who heads to Milwaukee with his best friend Madelyn (Ellen Wong) to spend the holidays with his brother Aiden (Chad Connell) and his mom Kate (Fran Drescher), who is also in charge of the local Christmas celebrations, per Lifetime. “Ever the matchmaker, Kate arranges for Hugo to run into Patrick (Lee), Hugo’s high school friend and secret crush, who has recently returned after a successful stint in Silicon Valley. As they enjoy the local holiday festivities together, Hugo and Patrick’s attraction to each other is undeniable and it looks as though Kate’s Santa-style matchmaking is a success. But as Hugo receives word of a big promotion requiring a move to London, he must decide what is most important to him.” 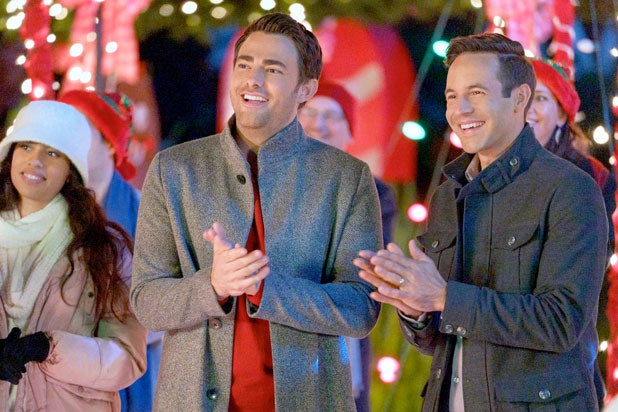 Lifetime beat Hallmark to the punch this season with this holiday movie featuring gay leads, something Hallmark is still lacking after making a public commitment to address its lack of LGBTQ characters and storyline. But Hallmark still made progress in 2020 with “The Christmas House,” which premiered Sunday and was co-written by the movie’s star, Robert Buckley, whose brother is gay.

“Our holiday table is bigger and more welcoming than ever,” Hallmark programming chief Michelle Vicary told TheWrap. “We are incredibly proud of the diversity and inclusion across our 2020 holiday slate, including ‘The Christmas House.’ The Christmas House is a movie about one family with three compelling stories, one of which is about a gay couple [played by Bennett and Harder, who are both gay] looking to adopt their first child. It’s a multigenerational, multicultural story that captures the rich, complexity of the human experience and what it means to be a part of a family.”

Vicary wouldn’t reveal to TheWrap if Hallmark plans to add a movie with gay leads to its 2021 slate.

When asked about pulling ahead of Hallmark in the LGBTQ space this year, Winter said she believes that Lifetime has always been the “leader in being incredibly inclusive in our holiday season, and that is a defining aspect of what we bring to the table during this timeframe.”

“We take this so seriously that we want people to feel like they see themselves here,” Winter said. “The communities that we embrace and the people that we bring in, we want to make sure that we have fantastic scripting around that.”

Winter couldn’t confirm it Lifetime is lining up more LGBTQ characters and storylines for next season, but noted it’s all based on the script for her. “I recently got asked, did we do anything for Hanukkah this year,” Winter. “And we didn’t do anything this year, we did something last year. But it was really just because we hadn’t found that script that we were like, ‘OK, this is wonderful, we love this. Let’s do it.’ But we’ll continue to look through each of the seasons. We’re already working on next year’s to see if we can continue our quest to really be the leader in bringing everybody in and including all communities.”

“The Christmas Setup” premieres Dec. 12 at 8/7c on Lifetime.

11/24/2020 TV & Movies Comments Off on How Lifetime, Hallmark Made the Yuletide Gay With LGBTQ Holiday Films
Recent Posts
We and our partners use cookies on this site to improve our service, perform analytics, personalize advertising, measure advertising performance, and remember website preferences.Ok