“There is definitely an element of Darcy being the one taking you through the story,” Dennings told TheWrap 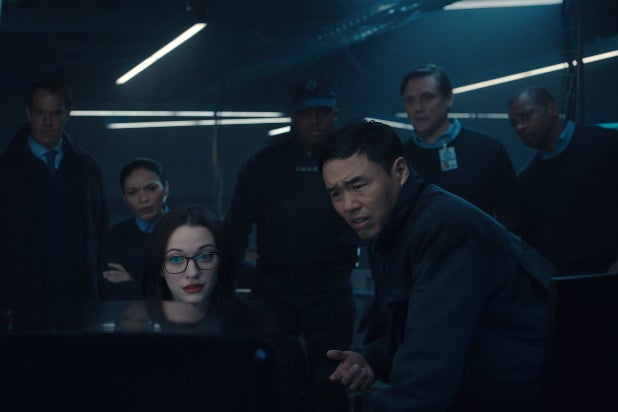 “WandaVision” finally began to answer some of the many questions viewers have about, well, pretty much everything going on in Westview, through the eyes of Randall Park’s FBI Agent Jimmy Woo and Kat Dennings’ Dr. Darcy Lewis. In fact, Friday’s episode saw the two asking a lot of the same questions that most fans were wondering themselves (the biggest being: why is this whole thing a sitcom?).

“Isn’t there something very cathartic about our appearance? Because it’s kind of like, ‘Oh, okay, we’re not alone. There’s characters that are in the show asking the same questions as us,” Park told TheWrap. Dennings added that she initially didn’t get the meta joke of actual “WandaVision” viewers watching the two of them watching the in-universe “WandaVision” on S.W.O.R.D.’s apparently limitless supply of old televisions.

“That’s the fun part that I didn’t quite put together until I was a viewer,” Denning says. “I knew that she was watching the show, and she’s watching the TVs, but there’s this meta joke that when you watch the first three (episodes), and you’re like, ‘Huh?’ And then you watch Darcy watch the ‘show’ and she’s like ‘Huh?’ And then you’re like ‘I’ve been you!’”

The fourth episode of “WandaVision” — aptly titled “We Interrupt This Transmission” — moved the focus outside of the sitcom-inspired world of Westview to S.W.O.R.D.’s perspective of the first three episodes. It also saw the returns of Dennings and Park to the Marvel Cinematic Universe for the first time since “Thor: The Dark World” and “Ant-Man and the Wasp,” respectively. The episode sees the two watching the fictional “WandaVision” that is broadcasting out of the Westview Anomaly, essentially making the two stand-in for the audience as everyone tries to figure out just what is happening with Wanda (Elizabeth) and Vision (Paul Bettany) inside the hexagonal energy field.

“There is definitely an element of Darcy being the one taking you through the story. She doesn’t know what’s going on either,” Dennings says, who added that she stopped reading ahead so she would remain just as confused as the audience. “I didn’t want to know anything anymore. I had done the table read, so I knew loosely what was going on. But I decided consciously to stop knowing anything anymore.”

For his park, Park agrees that the audience will learn more about the anomaly as Woo and Dr. Lewis figure out more, including whether or not Wanda is really the reason it’s happening, which Monica Rambeau (Teyonah Parris) confirmed after she was expelled from Westview, quite viciously, by Wanda herself.

“I think he will, in a lot of ways, continue to represent the audience. As he discovers more the audience will discover more,” he said.