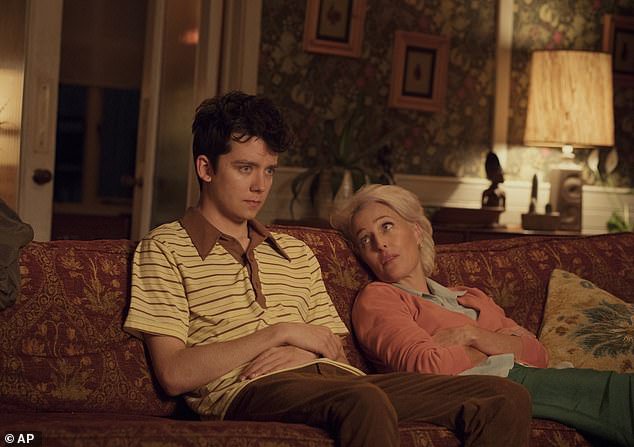 Sat in our parents’ living room surrounded by books on intimacy, vaginismus and even a phallic looking fossil, my sisters and I suddenly felt understood.

We had decided to start watching Sex Education on Netflix and found that the refreshingly clunky sex scenes didn’t embarrass us. We don’t blush easily; our mum is a sex and relationship therapist.

In the words of Adam Groff, the school bully, ‘she helps people bone better’.

Mum trained when I left home for university, and much like Otis’ peers, my friends thought it was amusing at first. They’re still prone to asking her questions about their relationships when they’ve had a few too many drinks. It’s more embarrassing for them in the morning than it is for me.

But having a real life Jean Milburn as a mother is not the only similarity I share with the show.

Like Adam, who finds it hard to get an erection in the first series, I thought there was something wrong with me when I struggled to get it up for the first time.

At the time I was 27 and I felt beyond isolated. It was like staring down the barrel of a sexless bachelorhood, which was terrifying.

But after some research, I soon discovered that there was actually nothing ‘wrong’ with me and that millions of guys around the world were going through the same thing, often with nowhere to turn other than Dr Google.

While erectile dysfunction is still considered an older man’s issue, this is far from the true picture, with a study finding that 35% of nearly 2,000 men under 40 had problems.

For men suffering from sexual health issues, a lack of education and resources can mean having to wait for endless medical referrals, resorting to unproven techniques found on online forums or – worst of all – a lifetime’s reliance on the little blue pills promoted by some wellness brands (which, as Adam found out, can leave you feeling light-headed and smelling of scampi…).

So while Otis gives sex advice to other students in the school toilets, I now do something similar for thousands of guys over the internet. Launched by me and my cousin, Mojo is a sexual wellbeing platform for men, offering expert-created tools needed to understand the causes of sexual health issues and clinically proven techniques to sort them.

You’ll notice when watching the show that Otis is not giving out particularly complicated advice – they are all simple fixes that just take a little time and rational thought.

This really resonates with what I’ve found. One example is an exercise called Soft Penis Pleasuring, which can help prevent anxiety around getting an erection.

Men are often sceptical when they’re told that simply examining their soft penis for 10 minutes a few times a week could be a cure for their performance anxiety, but it’s a hugely powerful and effective exercise. If you can be comfortable having a soft penis at the beginning of foreplay, you’ll put less pressure on yourself to get hard and it can then happen naturally.

In Sex Education, everyone at Moordale School has their own, very common insecurities that they’re dealing with alone. Which is why I think it’s not only important to give men and women the information they need about sexual health, but to normalise talking about it. Communication, destigmatisation and access to accurate and reliable information could well be the key to solving many of the most common sex problems.

This is also one of the reasons why Sex Education feels like a much-needed and honest breath of fresh air – its title has proven to be even more appropriate than the writers could have hoped. Not only have they delivered an award-winning, feel-good drama, successful on both sides of the Atlantic; they have created valuable content that is relied on by many young men and women who have fallen foul of poor or non-existent educational resources on sex.

While it might be weird to see so many aspects of my own life reflected on screen, I’m glad that anyone who may be looking for advice on relationships, or the diversity of sexuality and sexual identity, now has somewhere to turn.