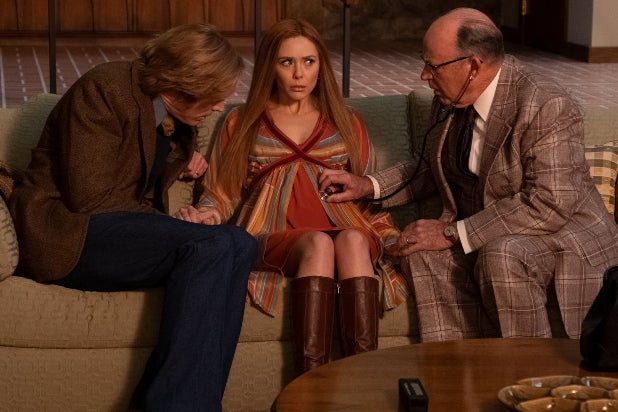 Episode 3 of “WandaVision” saw Wanda’s mysterious pregnancy come to fruition, with a little help from new Westview resident Geraldine. Sure, it’s great to see Wanda experiencing some happiness, even if we know there’s some catch to this whole reality. But viewers are probably wondering exactly who those twins are and if they have any significance to Wanda’s life beyond just this series.

The answer is yes. And we should pay close attention to their introduction as it’s extremely likely that they are Billy Kaplan and Tommy Shepherd. As we saw in this episode, before they knew they were having twins Wanda and Vision had an argument about what name to go with — Vision wanted Billy and Wanda wanted Tommy. It’s hard to imagine that it’s just a fun Easter Egg and not something more.

Tommy and Billy were created by Allen Heinberg and Jim Cheung. They originally debuted in the 2005/2006 “Young Avengers” comic series but their origin story stretches back to the 1980’s, when they were born. As Vision is an android with no way to father children, Wanda magically created twin sons — whose souls were unknowingly made from the demon Mephisto. When Mephisto’s soul becomes intact once again, Tommy and Billy disappear. And to preserve her sanity, Wanda’s witch mentor Agatha Harkness makes Wanda forget she ever had children. (Something that doesn’t quite work out.)

But Billy and Tommy don’t exactly disappear. Their souls are basically reincarnated in new bodies, which is why they both grow up separately and without the knowledge that they’re the sons of two powerful mutants until later in life. As far as their powers go, they resemble that of Scarlet Witch and her brother, Quicksilver. Tommy is known as “Speed” and has enhanced strength which allows his body to endure extreme force (like vibrating through solid barriers.) Billy is known as “Wiccan” and like his mother, can alter reality, fly, and teleport.

It remains to be seen how the twins will fit into “WandaVision,” whether they’ll stay a part of the series or go the route of the comics, disappearing only to reappear later on in reincarnated bodies. The show has already made Mephisto references, and that would allow a way for the twins to be aged up in the future.

But as for how they’ll fit into the future of the MCU, it’s pretty clear that Billy and Tommy are part of the foundation Marvel is building for the eventual Young Avengers team-up down the line.

Marvel hasn’t confirmed that Young Avengers is happening, but ever since its big Phase 4 announcements at Comic-Con two years ago, rumors have been swirling that there were plans in place to bring some of the young heroes into the MCU. Some of the characters have already been introduced or have been confirmed.

We met Cassie Lang in “Ant-Man” (the character is even being aged up for future appearances), and Kate Bishop will debut in the upcoming “Hawkeye” series. With rumors of Kang the Conqueror joining the MCU a confirmation of another member, Iron Lad, might not be too far off. And this doesn’t include the fact that new, younger heroes such as Ironheart, Ms. Marvel, and Spider-Man who could conceivably join the team.

We’ll have to wait to see how it all comes together, but even though “WandaVision” wasn’t originally intended to be the introduction to Phase 4, it’s definitely laying the groundwork for an important future with these two new additions to Wanda and Vision’s life.

01/22/2021 TV & Movies Comments Off on Is 'WandaVision' Setting Up the Young Avengers With Those Twin Babies?
Recent Posts