Love Island‘s Olivia Kaiser and Korey Gandy came out on top in Sunday’s finale when they were crowned the winners of season 3, thanks to America’s vote. The friends-turned-lovers’ journey to the $100,000 grand prize — which they’ll split — was filled with missed connections, messy love triangles and numerous detours for much of the first half of the season. It wasn’t until Casa Amor that the seeds of their friendship started to blossom into something more.

“It wasn’t until the later half of the season until we started to explore that romantic connection. Prior to that, we had built such a strong friendship base, so I think that’s what helped us and what pushed us so quickly,” Korey told ET on Monday over Zoom. “But in the start of it, we were both going through kind of the same journey. We’re not finding a connection with the people that we’re with and we’re going through all these ups and downs, but at the same time, we’re seeing each other grow as individuals. That’s what attracted me to her. Once we were able to complete our growth as individuals, we were able to come together and really explore that romantic connection. That’s ultimately what made us so strong.”

“I agree. No one understands what I went through in the villa more than he does,” Olivia said. “I think the easiest thing for me to say is every time we were around each other, that was the happiest I was in the villa. We are constantly laughing. We’re so similar and sometimes when you’re so similar with someone, you might be like, ‘Oh, is that going to work out?’ There’s a saying, ‘Opposites attract.’ I think by us not having any pressure and not trying to impress each other because we started as friends, it was just easy.”

And viewers took note. After an unpredictable season that saw a heartbreaking exit, Olivia and Korey won over Day 1 couple Kyra Lizama and Will Moncada (the runners-up), Jeremy Hershberg and Bailey Marshall (third place) and Alana Paolucci and Charlie Lynch (fourth place).

The day after the finale, ET spoke with the winning couple about their future plans together, what they learned about themselves from their roller-coaster Love Island experience and which pairs they believe will make it in the real world.

ET: First of all, congratulations! How are you feeling now that you’ve won? Has it sunk in?

Olivia Kaiser: It’s amazing! It hasn’t sunk in, I don’t think, for either of us.

Korey Gandy: I haven’t really talked much in the past day, which is super weird. I’m normally bouncing off the walls talking about something. It definitely hasn’t hit me yet just because we’re still all around each other, you know? It feels like we’re back in the villa and we’re in that atmosphere of life, but I think once we all get back to our normal lives that’s when it will really start to hit us for sure.

What have you discussed in terms of your future plans together?

Kaiser: Definitely No. 1 on the list is traveling and experiencing everything life has to offer. That’s the biggest thing. We’re going to New York on Friday, and after New York, we’re going to his hometown, Virginia Beach, and just vibe out there for a little while. Hang out with his dog. Honestly, we’re not really planning anything and we’re just going to flow. We’re definitely going to be with each other.

What are you most excited to learn or discover about each other outside the villa?

Gandy: I’m most excited to meet her family. I’ve met her mom over Facetime. That was awesome. She’s a super genuine person, literally the exact same person but in older form. Her dad, I want to meet him, and her friends. Just how life is back home. That excites me and I can’t wait for it, honestly.

Kaiser: He rides motorcycles, so I’m excited to see him in his motorcycle crew and see how they act together. Even just the little things like going out to get a drink or a snack or something or even the movies, I’m ready to get back to the real world. 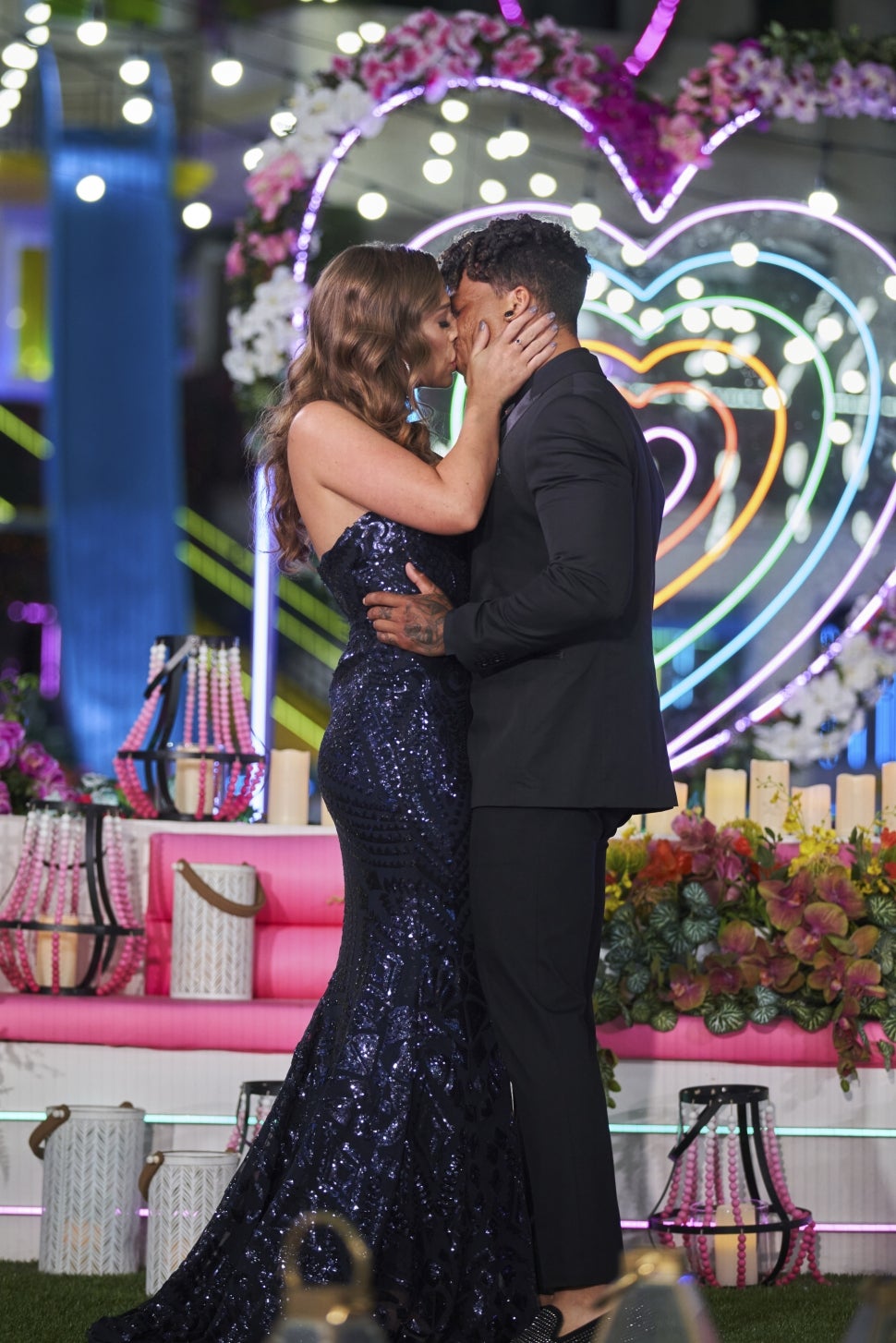 When was the turning point for you when you thought there’s something more here?

Gandy: For me, it was Casa Amor. When they all left, I found myself thinking and missing Olivia and how they used to be in the villa and everything like that. So that’s when I started thinking there’s gotta be something more than a friendship because I want to cuddle with this girl and I don’t want to cuddle with anyone else. I just want her to come back, so I’m not going to lie, I was definitely counting down the days to when they would all come back. Just seeing her come back by herself, for me that was like, “All right, that’s a sign right there. I just gotta send it and go for it.”

Kaiser: We haven’t watched anything yet because we just got out so we don’t know what was shown necessarily, but for me, I actually was forming a crush on him even before Florita came into the villa. And then Florita came in. We just kept missing each other. I told him, “Oh, you like Florita? Explore that,” because we were friends first and I always wanted the best for him and I know he wants the best for me. Then she left and we started exploring that a little bit and then we got a text, “Casa Amor, go!” And I was like, right, so another missed chance. But then also, I was like, Casa Amor this is great. I can meet five new guys, this is my shot. Leaving Casa Amor single, I was like, “Wow, that happened…” But I’m so happy it did. I couldn’t get Korey out of my head and I just knew that I’d rather go home or give it a shot. And I’m happy I did.

Korey, you’ve found yourself in a few “love triangles” with fellow islander Jeremy during the season. It obviously worked out for you in the end, but looking back, what was that experience like?

Gandy: Literally a love triangle. Honestly, I think I might have the record for being in the most couples on Love Island. I have to look that up to for sure to see, but yeah. I ended up in a lot of friendship couples. At first I wasn’t connecting with anyone romantically and I think what I was looking for was that instant spark, which come to find out now, sometimes the spark isn’t always instant. It has to grow into that, but yeah, I’m just sitting there on friendship island not connecting with anyone. Florita came in and just seeing her was an initial, “Oh my god, hi. This girl is gorgeous. This is my time. Let me just get off this friendship island and get on everyone else’s page and couple up.”

I was super excited for that. And it was short. It was only two or three days that we were coupled up and she taught me a lot. But ultimately I ended up in a love triangle, the first one with my boy, Jeremy. In the moment it was weird, but looking back at it now, I wouldn’t change anything and Florita just wasn’t my person. She’s an amazing girl. Same with Jeremy. That’s probably my best friend in the villa. So I was happy for what they were able to form and what Florita was able to teach Jeremy. But at the end of the day, the path led me to where I belong.

Olivia, what did you learn with your time with Javonny that helped shape your Love Island journey?

Kaiser: I would say it was less about me and him, and more about myself. I learned a lot from that coupling. I learned what I’m looking for and what I’m not looking for. Things that are important to me and maybe things that I can let slide. He taught me to loosen up a little bit, I would say. As everyone knows, Javonny is wild. And yeah, that was just an interesting time in the villa. I think that was me not only trying to get out of my comfort zone, but that was the first two weeks. That was still us getting to know how the villa works and also getting to know each other still. I am lucky that it worked out like that and I wouldn’t change anything. But all I can do when I think about me and Javonny being coupled up, I can’t even believe it. It feels like literally years ago. So I’m like, “What the heck?” But I will say, I’ll never forget that man because he is wild and he definitely makes himself known when he’s in the room.

Who are you most excited to reunite with and hang out with outside the villa?

Every islander I spoke to right up until the finale chose you guys as their personal picks to win.

Kaiser: We love everyone, honestly. There isn’t one person that’s bad blood at all. We’re literally all family. It’s amazing.

Gandy: And then their emotions, they’re almost intensified times a hundred. Christian, he was the first person to leave and we’d known each other for legit four days. When he left, you get that lump in your throat when you’re super sad. I got a lump in my throat over a guy that I just met four days ago. So you immediately establish this strong bond with each other — friendship, romantic, whatever it is. That was a new feeling for me a hundred percent. I wouldn’t take anything back, for sure. I think it ultimately brought us all together at the end and now we’re all just like, it sounds corny, but we’re just one big family.

Who do you think has the best shot to last outside the villa?

Kaiser: We don’t know everything that’s happening right now outside of this, so I have some predictions. Let’s just say she’s a bold lady. She goes after what she wants.

Gandy: Wes and Aimee. They’ve been hanging out living their best lives.

You can watch all of Love Island season 3 on Paramount+. For more, watch below.

ET and Paramount+ are both subsidiaries of ViacomCBS.