Like her fellow Oscar-nominated colleagues, costume designer Trish Summerville had the rare opportunity of working in black-and-white on David Fincher’s “Mank,” which meticulously recaptured the Golden Age of Hollywood in the ’30s. But their work was made easier by the monochromatic settings on their iPhones, allowing them to instantly translate the proper color tones. This way, the look of Summerville’s wardrobes would be in sync with the sets and decor. It was all part of strategic plan to create an authentic-looking monochromatic world.

“I had conversations with [production designer] Don Burt about what his color palettes would be so we wouldn’t have the rooms be so colorful,” Summerville said. “We wanted to have the tones blend. For us in costumes, it was more burgundies, purples, navies, blacks. And you could pump up from there to gowns with muted lilacs or dusty roses, which came in as nice light grays. We also had shell whites or cream whites and stayed away from deep black. It was also being mindful of prints and patterns that could be too bold or too busy. And how to use details that wouldn’t have too much contrast or disappear entirely. For instance, you couldn’t have navy buttons on a navy suit or it would look black.”

For the men, the costume team devised a chart not only for the principals but also for members of the Paramount writer’s room supervised by Gary Oldman’s Herman J. Mankiewicz. This was to ensure sufficient variation. However, the period silk ties were tricky: Summerville had to determine color and pattern along with length and width. It was very much like putting different puzzle pieces together for a grand mosaic. 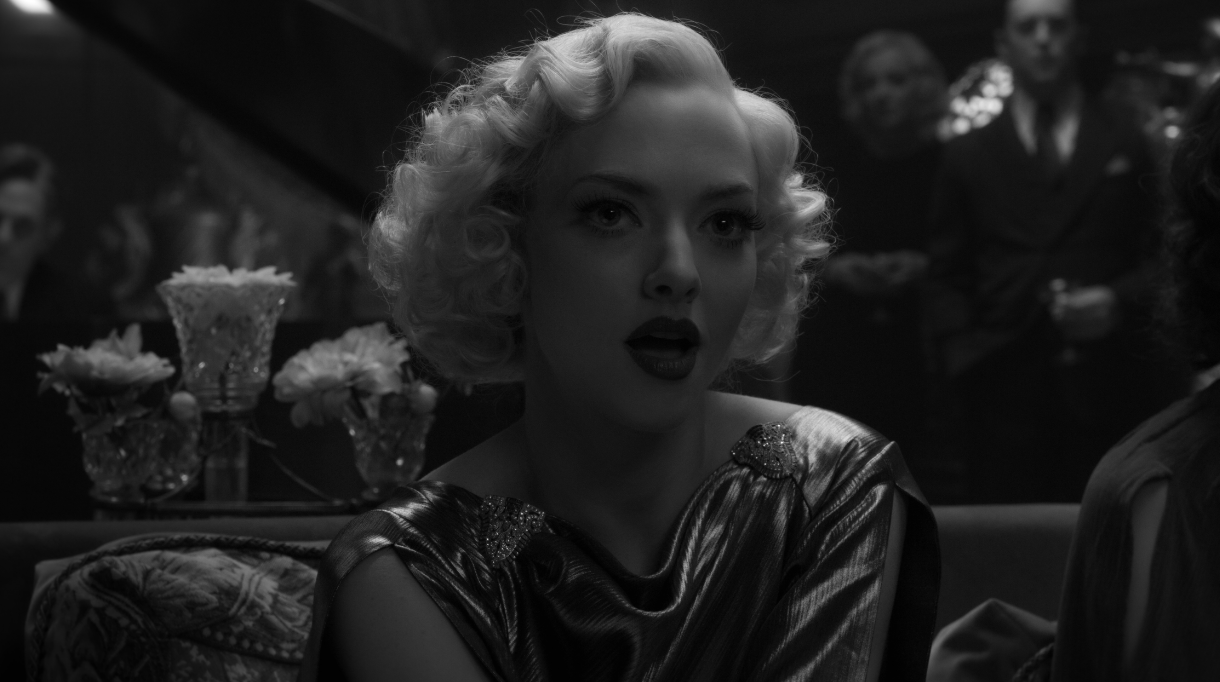 “With Mank, I wanted to keep him in grays and browns and pinstripes,” Summerville added. “And so if I had him in a blue suit, it would have a gray undertone so that it read gray in black-and- white. And i kept him very contained, and then just slightly changed him over the periods of time…and adjusting where his pants fit on his belly to show a progression of weight gain. And with shirts, it was giving him a dingy perspiration around the neck, with nicotine stains.”

It helped that Oldman put on around 15 pounds for the role to ease the costuming burden. With his shirts, they made the neck band a little too tight so that when his collar was buttoned with his tie on, he looked heavier. Depending on the situation, they aged down and wrinkled his clothes to make them look very lived in, compared to Irving J. Thalberg (Ferdinand Kingsley) who always looks pressed and dapper.

For Mank’s confused stroll onto the San Simeon estate, he’s definitely disheveled when encountering Louis B. Mayer (Arliss Howard), William Randolph Hearst (Charles Dance) and Marion Davies (Amanda Seyfried), who is tied to a stake for a mock-burning. “He’s just a mess,” said Summerville. “I wanted his suit to be darker and he’s the one who stands out while Mayer and Thalberg look so pulled together with light summer [clothes].”

For the Mayer birthday party sequence, Summerville put Davies, the starlet and hostess of Hearst Castle, in a gorgeous gold lame gown. This was a turning point in which she bonds with Mank during a memorable moonlight stroll. “For that, I wanted it to be shiny and catch light well,” she said, “and I wanted it to transition well from going inside with all this dark wood to going outside with all this moonlight and still be glamorous. She’s going to take her shoes off and have this bottle of gin for this physical comedy.”

By contrast, Davies was fitted with a shiny white drum majorette costume for the circus-themed San Simeon party that actually occurred in real life. Mank strolls in drunk, sits down at the other end of the table, and immediately spots her as a shining light of support. “He’s the one who’s supposed to be out of place,” Summerville said, “but he’s wearing a proper suit and everyone else is in trapeze costumes and clown costumes. And he circles the table like a shark. I like that juxtaposition with the sanity in the room.”