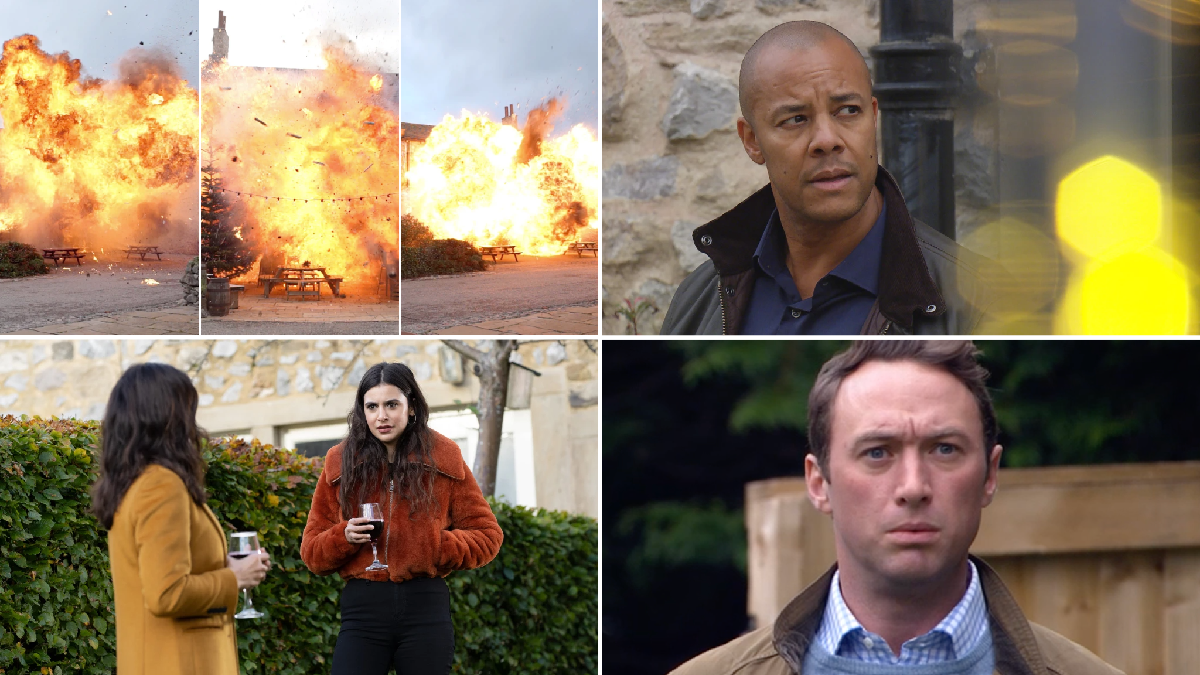 It’s Christmas time…there’s no need to be afraid…or is there? Well, it’s Emmerdale after all.

Christmas in the Dales is set to be a dangerous one for most residents. Meena (Paige Sandhu) targets someone new and unexpected, Liam (Jonny McPherson) finds himself in danger and Al (Michael Wildman) ups the stakes as the plan for the Woolpack takes a deadly turn.

So, what’s going on?

A face from Dawn’s past brings trouble

Dawn (Olivia Bromley) gets a surprise on her doorstep when Alex, her ex, arrives and tells Lucas he’s his biological father.

As her jealousy grows, Meena seeks an opportunity to create havoc for Dawn by telling Alex that Lucas isn’t safe to be with Dawn, leaving him terrified for the young lad’s welfare.

The next day, Meena accuses Dawn of neglecting Lucas, urging Alex to just take him away from the village.

Looking for Alex and Lucas, Dawn’s heart leaps into her mouth when she realises they’ve both disappeared.

A search begins, but can Dawn find Alex and Lucas?

Viewers are aware that Meena was responsible for killing her best friend Nadine, before she arrived in the village.

It’s Nadine’s death that haunts Manpreet (Rebecca Sarker) over the festive period as she makes contact with Carol, Nadine’s sister.

Meeting up with Carol, Manpreet is utterly floored when Carol says she believes Meena murdered Nadine.

Reeling from the discovery, Manpreet struggles with the idea her sister is a murderer and starts to regret contacting Carol.

Meena collects a parcel…a dodgy one

Unaware Manpreet has met up with Carol, Meena meets up with a driver on Main Street and exchanges cash for a dodgy package, but what is it?

Is Meena planning something?

Away from Meena murdering someone, we’ve also got to discuss the prospect of Kim (Claire King) killing Will (Dean Andrews).

During a quiet discussion, Will and Bernice talk about their feelings for each other.

As the atmosphere turns sour, Bernice gives Will an ultimatum: her or Kim.

However, unbeknownst to them both, Kim has heard the entire conversation and is busy making a call to plan a ‘disposal’.

But what is she up to?

Is she planning on murdering Will to get revenge, and then dispose of his body?

After Mandy (Lisa Riley) urges Sam to make amends with Lydia, he decides to take action and invites her for Christmas at the Dingles.

Continuing his attempt to win Lydia back, Sam is offered advice by Samson (Sam Hall), but will things go smoothly?

Will Lydia and Sam mend their relationship?

We’ve barely seen Gavin (Ben Richards) since his casting was announced, but his storyline really picks up pace over the Christmas period as he threatens his business partner, Al.

With Chas (Lucy Pargeter) and Marlon (Mark Charnock) refusing to sell, Al is feeling the pressure when Gavin urges him to change Chas and Marlon’s mind.

In the middle of nowhere, a big, muscley man gets out of Gavin’s car and approaches Al.

It’s an emotional Christmas for Liam as it’s the first one without daughter Leanna (Mimi Slinger), following her death.

Drunk and staggering home, Liam is helped by Meena, but things take a worrying turn when she manages to bring Liam back to her bedroom.

Out for the count, Liam has been ensnared by Meena’s trap, but what will she do?

It remains to be seen what Meena does next, but her actions trigger warning signs of a sexual assault. As Liam is in danger, can Meena possibly get away with another sick crime?

It’s Christmas day and the residents awake to a thin dusting of what appears to be snow, but is all as it seems? Soon, we flashback to the hours that preceded this flurry and understand what really happened.

So, is it really a white Christmas in the Dales?

We know the Woolpack will explode soon – could the ‘thin dusting’ actually be ash from the burning pub?

Angry and hurt (poor wee soul), Al gets a threatening message from Gavin.

Feeling the pressure and wanting revenge, Al gazes back at the Woolpack and comes up with a plan to get out of his nightmare.

But is this confirmation Al will be responsible for the Woolpack fire?

If so, will anyone die?

Yes, wouldn’t be an Emmerdale proposal without a bit of drama!

As Will approaches Malone’s grave with Kim, he’s shocked to discover the body has disappeared.

Initially worried digging up the body is part of Kim’s revenge, Will is stunned when Kim tells him she removed the body, so he no longer feels tethered to her.

Touched by the gesture, Will proposes to Kim.

But how will Bernice react? Could she take revenge and tell Kim about Will’s feelings?

Still overwhelmed with worry after Carol’s accusation, Manpreet continues to see Meena’s evil side as she spots her trying to report Dawn to social services.

Suspicious over her sister’s pregnancy, Manpreet demands answers and wants Meena to provide proof of her pregnancy.

Believing her sister has crossed a line, Meena darkens as Manpreet begins to realise that Carol may have been right all along.

Desperate to get her own back, Meena stalks Manpreet with a broken bottle, but will she kill her sister?

In the past, when someone discovers Meena is a murderer, they are killed shortly after…will the same thing happen to Manpreet?