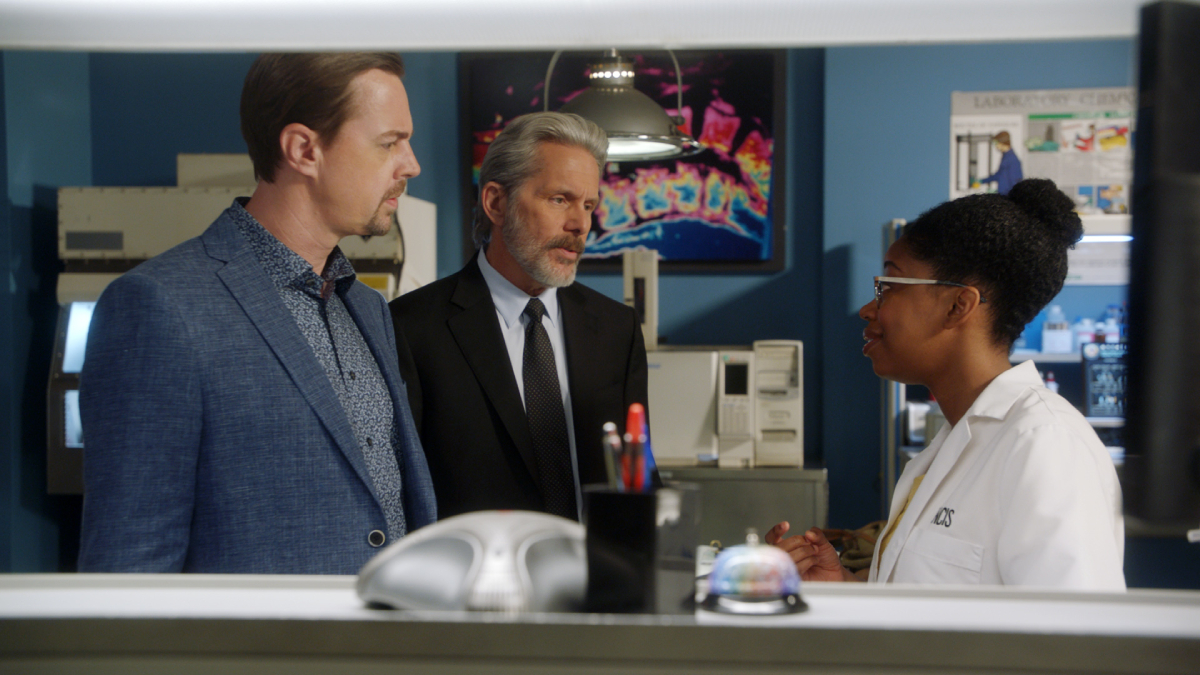 NCIS season 19 has officially begun, but fans are still wondering about the fate of series star Mark Harmon (Gibbs). Will he have a reduced role this season? Is this season his last? Will NCIS go on without him? Is Gary Cole’s Agent Alden Parker replacing Harmon’s Gibbs?

The answers to these questions are still unclear. But fans think that NCIS has dropped some hints about Parker replacing Gibbs in the first two episodes. Here are all the signs that Harmon is on his way out and will be replaced by Cole’s Parker — despite CBS’ denials.

When CBS announced this past summer that Cole was joining the NCIS cast as a series regular, sources insisted to TV Line that Cole’s character was not “replacing” Gibbs. The network wouldn’t reveal too many details about Cole’s character, except that his name is Alden Parker and he is an FBI special agent.

Cole was not part of the season 19 premiere. Instead, NCIS waited until episode 2 “Nearly Departed” to introduce Cole’s Agent Parker. At first, he was a suspect in Gibbs’ serial killer case. But when his cover was blown, Agent Parker introduced himself to the NCIS team.

One of the signs that Agent Parker will replace Gibbs actually came straight from the character’s mouth.

Agent Alden Parker is the opposite of Leroy Jethro Gibbs

One thing fans noticed in Cole’s first episode was that the NCIS writers went out of their way to point out that Agent Parker was the exact opposite of Gibbs. This could be a hint that the new character is taking Gibbs’ place at some point in season 19 of NCIS.

It happened in the scene where Parker was being interrogated by McGee (Sean Murray), and he said that coincidences happen all of the time.

“So you and your thugs slammed me to the ground and then dragged me to this horribly lit room on a coincidence?” Parker asks McGee.

“No such thing,” McGee replies, who knows that Gibbs’ rule #39 is that there is no such thing as a coincidence.

“Oh of course there is, they happen all the time,” Parker says. “In fact, a Harvard scientist estimated that over four million coincidences actually happen every hour of every day.”

In the first two episodes of NCIS season 19, Gibbs has turned down all requests for him to return to NCIS after his indefinite suspension. In the premiere, McGee learned that the name of Gibbs’ boat, Rule 91, meant that “when you decide to walk away, don’t look back.”

McGee also told Torres (Wilmer Valderrama) that he doesn’t think Gibbs is “coming back to anything” until he finds this serial killer. And when McGee begged Gibbs to come back, he told him that NCIS didn’t need him.

In episode 2, director Vance (Rocky Carroll) offered Gibbs the chance to return. He told him, “Come back. What will it take? You tell me, I’ll make it work.” But, Gibbs still refused the offer.

Episode 2 also featured a very telling conversation between Gibbs and Fornell (Joe Spano) that may have included a few hints about his future. Fornell suggests that it’s time for Gibbs to end his pursuit of justice to try to fill the void inside him.

“You always find some way to justify staying in the hunt,” Fornell tells Gibbs. “It’s all you do, and for how long, Mr. ‘Who am I without the job?’ How many wrongs made right will it take you to fill the void inside you?”

Fornell reminds him that they’ve both lost jobs, wives (more than one), and kids. He says that after finding a support group, he’s now good (not great). And, Fornell believes that Gibbs could be too.

“Chasing bad guys may not be the answer anymore. Hell, it may even be the problem,” Fornell says.

He may be a Special Agent for the FBI, but this serial killer case has brought Agent Parker into the world of NCIS. And this will continue into episode 3, according to the preview. The longer Agent Parker works with Gibbs’ team, the easier it will be for him to make the transition.

As the new series regular, it doesn’t make sense for Agent Parker to be the new “Fornell” and act as a liaison between the two agencies when they are working on a case together. Instead, it makes more sense that a series regular would be part of the team at NCIS.

New episodes of season 19 of NCIS air Mondays on CBS.

10/01/2021 TV & Movies Comments Off on 'NCIS' Season 19: All the Signs Mark Harmon Is Being Replaced By Gary Cole — Despite CBS' Denials
Recent Posts